As many pundits had predicted, JetBlue's decision to add the E190 to its fleet hasn't worked out well -- though not necessarily for the reasons they cited. Now, new JetBlue Airways CFO Steve Priest is launching a complete fleet review to determine whether the smallest planes in JetBlue's fleet have a long-term future with the company.

More than a decade ago, JetBlue became the launch customer for the Embraer E190. At the time, management recognized that the E190 would have higher unit costs than the company's existing fleet of Airbus A320s. However, due to its smaller size, the E190 costs much less to operate on a per-trip basis. 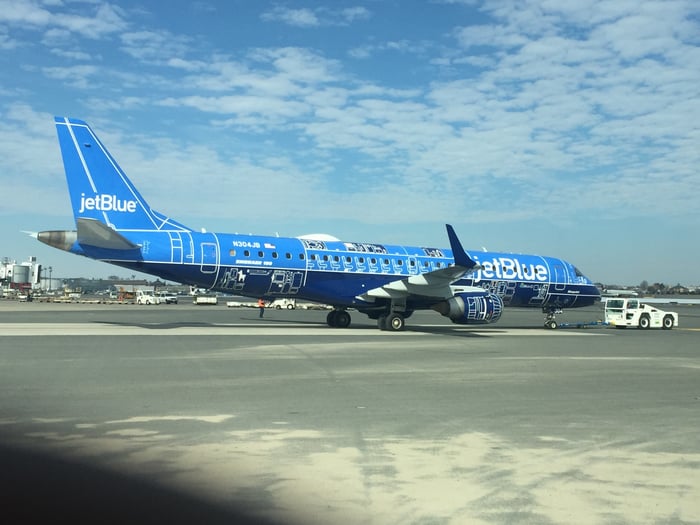 JetBlue was one of the first airlines to order the Embraer E190. Image source: JetBlue Airways.

As a result, the Embraer jets seemed to offer an opportunity to move into slightly smaller markets that couldn't support frequent service on an A320. JetBlue initially expected its Embraer fleet to generate similar or higher margins than its A320s.

Ultimately, the E190s did enable JetBlue to enter certain markets that would have been challenging to serve with A320s. However, unit costs for the Embraer planes have been much higher than planned.

Costs spiral out of control

JetBlue underestimated unit costs for the Embraer fleet in two ways. First, pilot costs have increased significantly in recent years due to a growing pilot shortage. The top-of-scale wage for JetBlue's E190 pilots has more than doubled over the past decade.

JetBlue does pay its E190 pilots about 10% less than A320 or A321 pilots with comparable seniority, but that's still much more on a per-seat basis. The higher pilot costs go, the greater the advantage of larger planes.

Second -- and even more importantly -- JetBlue's Embraer fleet has had high maintenance costs. This has been an ongoing cause of frustration for management. The oldest E190s in its fleet (which were among the first E-Jets that Embraer built) have caused the biggest reliability issues.

However, all of JetBlue's E190s have had unusually high engine maintenance costs. Other Embraer E190 operators have had issues as well. That's why American Airlines recently decided to retire its entire E190 fleet by 2019, after just a dozen years of service.

In total, between 2004 (the year before the first E190s arrived) and 2016, JetBlue's cost per available seat mile surged more than 60%, from 6.1 cents to 9.9 cents. Higher-than-expected costs for the E190 fleet played a significant role in driving those unit cost increases.

Has JetBlue reached the breaking point?

At a recent investor conference, JetBlue CEO Robin Hayes said that the company had launched a complete fleet review, including an evaluation of the Embraer fleet. He noted that JetBlue wasn't upset with the costs of the E190, per se, but rather the overall returns from that fleet. In other words, JetBlue is willing to accept higher unit costs from operating smaller planes if it gets a big enough unit revenue premium.

Either way, it doesn't look good for the E190. While the E190 has thrived on certain routes for JetBlue, its unexpectedly high costs and the added complexity from operating two separate fleet types almost certainly outweigh the unit revenue advantage.

In the medium term, JetBlue is likely to keep most or all of its E190 fleet. Half of its E190s are on leases that don't expire until the 2023-2025 period. The other half are owned but are less than halfway into their useful lives. Furthermore, JetBlue just signed a five-year paint and heavy maintenance agreement for the E190 fleet.

However, five years from now, the E190 leases will be close to expiring. It might make sense to retire the owned E190s around that time as well, due to the rising cost of maintaining them.

One option would be to double down on the Airbus A320. JetBlue will soon reconfigure its A320s to have 162 seats, making them much larger than the E190. However, their lower unit costs could potentially make up for the unit revenue hit that JetBlue would incur from introducing a larger plane on certain routes.

A second option would entail buying either used A319s or new A319neos to supplement JetBlue's existing Airbus fleet. The A319 is a good deal larger than the E190. It would probably have about 132 seats in a JetBlue configuration. But that would be a much smaller jump in capacity than if JetBlue were to operate just A320s and A321s.

Third, JetBlue has had preliminary discussions with Bombardier about its CSeries jets. The CS100 is slightly larger than Embraer's E190, while the CS300 is roughly comparable in size to the A319. These state-of-the-art planes are extremely fuel efficient despite their relatively small size. However, JetBlue would have to retrain all of its Embraer pilots, and it would have to continue managing the complexity of multiple fleet types in the long run.

Fourth, JetBlue could buy Embraer's new E2-series jets. The E190-E2, which will enter service next year, is expected to use 16% less fuel than the current-generation E190. It is also supposed to have much lower maintenance costs than the first-generation E190. Embraer's new E190-E2 could be a good fit for JetBlue. Image source: Embraer.

JetBlue could also consider buying the E195-E2, which is about 25% bigger than the E190-E2. It will be even cheaper to operate on a per-seat basis, while still being much smaller than an A320.

Embraer has the inside track

Upgrading to the latest generation of Embraer jets a few years down the road is the most likely outcome here. JetBlue has built a successful route network that requires having some smaller planes in its fleet. The E2-series jets will make it far more cost effective to fly these routes.

Furthermore, JetBlue already has 24 firm orders for E190s on the books, which could easily be converted to the next-gen models. Staying within the E-Jet family would also avoid the retraining cost that would come with switching to the CSeries jets. Lastly, Embraer will fight hard to keep JetBlue's business, in order to avoid losing one of its biggest customers. Hopefully, the second time will be the charm for JetBlue and Embraer.