eBay's ad business has been stuck in neutral, but there's a lot of growth potential in it.

eBay (EBAY 2.93%) has quietly built a billion-dollar business without putting much effort into it. The online marketplace's marketing services business generated $1.1 billion in revenue last year, but it's been slowly declining since 2012, when total revenue for marketplace marketing services reached $1.3 billion.

eBay is ready to get serious about advertising, with plans to build up its internal advertising sales team and cut ties with the outside sales firm that had been selling its ads. It's also getting rid of ads that link to other websites, focusing exclusively on ads for products sold on eBay itself.

The move echoes a recent change in Amazon's (AMZN 3.15%) ad business and leverages eBay's unique shopper data, giving it an advantage over Facebook and Alphabet's Google. 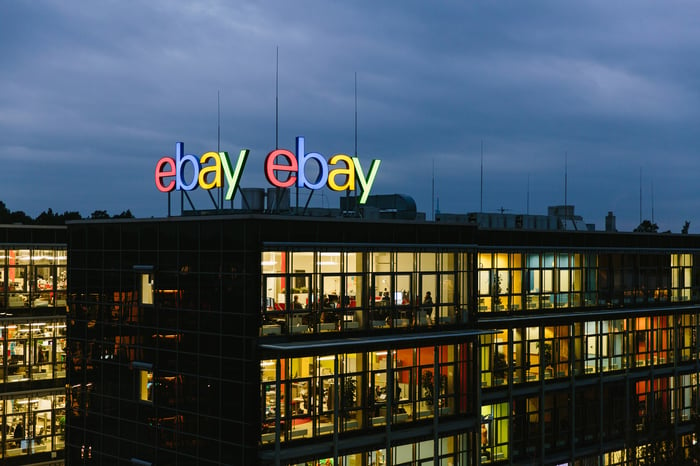 eBay CEO Devin Wenig telegraphed the company's interest in growing sales of ads that focus on product listings on eBay. "Increasingly we're seeing good results from internal ads, ads for eBay sellers promoting their inventory in our search results and in other places on our site," he said on the company's fourth-quarter earnings call. "And for us that's a really, really good flywheel because keeps our buyers inside our marketplace, it allows us to create a new stream of monetization, and it allows our sellers to buy up for promotional activities."

Shifting exclusively to ads that promote products sold through eBay will keep shoppers on its site, potentially increasing gross merchandise volume. As volume increases, merchants have more incentive to sell products on eBay's marketplace and advertise those product listings.

Amazon made a similar move in 2015, and the growth of third-party merchants on Amazon's marketplace is fueling its sales growth. Granted, only a small part of that growth is due to Amazon's revamped ad platform.

eBay and Amazon have some of the best data for advertising. Few things are a better predictor of future purchases than a shopper's previous purchases. With 167 million active buyers making $84 billion in purchases, eBay has quite a bit of purchase data. And, eBay says its users spend 200 million hours searching and browsing its website every month.

eBay also doesn't sell any products directly, which could encourage merchants to favor its platform over Amazon's. Not only does Amazon sell goods itself, it has an increasingly broad range of private labels with which it can significantly undercut competing products' pricing.

The digital advertising space is massive. Google and Facebook are certainly dominant forces, raking in a combined $86.5 billion last year. But eMarketer estimates there was another $108 billion split among the rest of the crowd. By 2020, digital ad sales will reach $320 billion, according to the research group.

After a full year of making changes to its advertising business, Amazon saw its other income segment (which includes advertising and credit card agreements) grow 81% in the fourth quarter. While Amazon only brought in $1.3 billion in other income last year, it's still a huge opportunity for the company.

eBay's recent move echoes Amazon's, and provides a similar opportunity. Given its ad business is already comparable in size to Amazon's, that's a good start. But it needs to revamp the product and get back into growth mode in order to take advantage of the potential.