Tuesday turned out to be one of the worst days for equities in 2017 so far. The Dow Jones Industrial Average fell in the triple digits, while the broader indexes suffered comparable slumps. But some individual stocks bucked the negative trend, including Chipotle Mexican Grill (CMG 1.70%), Sprouts Farmers Market (SFM 1.71%), and OraSure Technologies (OSUR 1.10%). Read on to see what drove shares of these businesses higher today.

Is Chipotle wrapping up a delicious beat? 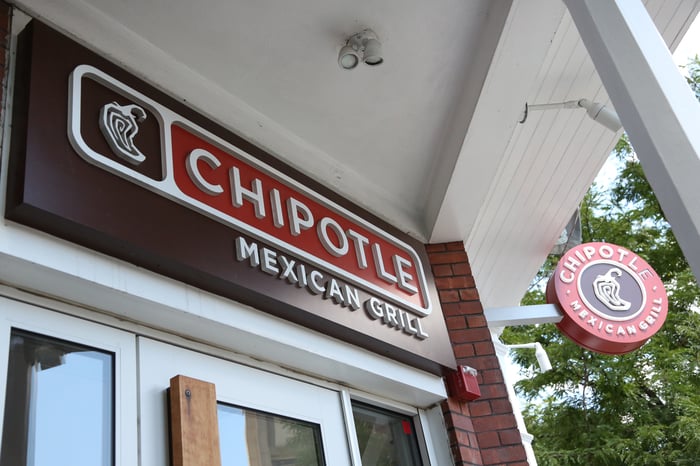 As Chipotle strives to recover from the fallout of multiple food-borne illness scares in late 2015, that's not to say M Science's prediction should be entirely surprising. The fast-casual restaurant chain returned to year-over-year revenue growth last quarter, while noting comps had turned positive this past December and showed sustained improvement in January. And a February 2017 consumer loyalty study from Market Force Information showed Chipotle returning to lead the Mexican food category, indicating it may have finally won back diners' trust.

As it stands, we're still roughly a month away from Chipotle's official first-quarter 2017 report. But if M Science's research proves accurate, Chipotle investors could be in for more gains going forward.

Shares of organic supermarket chain Sprouts Farmers Market rose almost 3% amid continued speculation that it may be an acquisition target for grocery industry juggernaut Albertsons.

Curiously, the news first came through a Bloomberg report on Sunday, which stated Albertsons has held talks with Sprouts in recent weeks regarding a potential merger. And Sprouts stock initially climbed around 5% early Monday, only to pull back and trade down 1% by the time the market closed. Keeping in mind Sprouts stock also rallied 17% between Thursday and Friday of last week -- raising questions of whether some investors knew of the talks ahead of the public report -- analysts also suggested the acquisition premium could go as high as $26 per share. With Sprouts closing Tuesday at $22.46 per share, that could still mean a healthy premium if an agreement actually materializes.

OraSure is moving up

Finally, shares of OraSure Technologies climbed 8.4% today following news the medical device company will replace G&K Services in the S&P SmallCap 600 Index, effective prior to the market open this Thursday, March 23, 2017. G&K is being acquired by Cintas Corporation per an agreement struck late last year.

Earlier this month, OraSure announced its OraQuick HIV Self-Test had received the endorsement of Global Fund's expert panel in being designated as eligible for procurement by purchasing entities -- notably including governmental organizations -- entitled to access Global Fund and UNITAID resources.

To be clear, however, today's news doesn't actually change OraSure's underlying business. But viewing this small-cap stock from an investor's standpoint, to join this market index is seen as an encouraging vote of confidence in the relative stability of the business.