The fitness tracker maker could be a speculative turnaround play.

Let's be clear about something: Fitbit (FIT) had a terrible fourth quarter and has numerous strategic challenges that it must overcome. Much of last quarter's woes were directly related to weaker-than-expected demand that led to increased channel inventory and elevated return reserves, among other one-time charges. Shares have been rightly punished for the poor holiday performance, and continue to trend lower.

But with Fitbit shares trading at all-time lows and potentially entering deep value territory, it might be worth considering as a speculative turnaround play.

In terms of valuation, Fitbit is now trading at just 0.6 times sales, with a market cap of just $1.25 billion. Investor pessimism has seemingly snowballed amid the company's very real challenges. Fitbit has made little to no progress diversifying into software and services, which it had high hopes of doing with its 2015 acquisition of Fitstar, and the consumer hardware market is notoriously cutthroat. The pressure to continuously introduce newer and better hardware products remains intense, and Fitbit has a mixed track record with product launches. 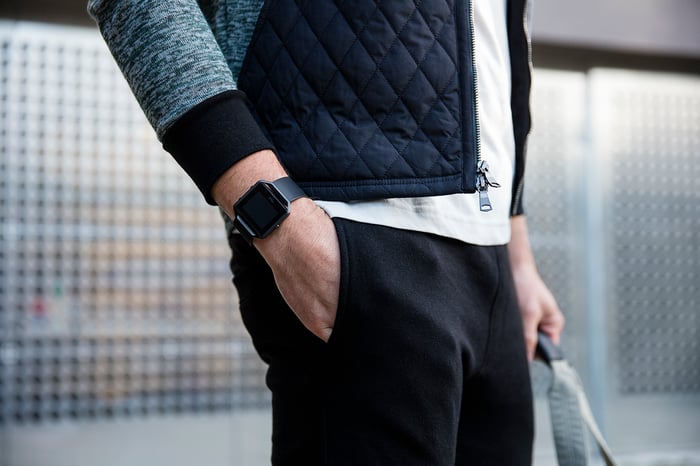 Fashion is only going to get more important. Image source: Fitbit.

Smartwatches continue to threaten cannibalizing the stand-alone fitness tracker market, and Fitbit is tasked with transitioning to more full-featured smartwatches; the acquisitions of Coin, Pebble, and Vector were made specifically for this purpose. Just this week, market researcher IDC predicted that the broader wearables market is about to expand into areas like clothing and earwear, and smartwatches in particular may even "hyper-segment" into a wide range of niches. Of all of the various wearable categories, wrist-worn devices are expected to stagnate in the years ahead. The future of wearables has never been more uncertain, and given the heavy emphasis on fashion and consumer preferences, it won't be an easy pivot.

It's also worth pointing out that Fitbit has attracted an awful lot of short-sellers, who now hold 36% of float in bearish bets. If heightened short-selling activity has helped push shares down below reasonable values, then shares could be arguably undervalued right now. While some pessimism is absolutely warranted, it could potentially be overdone right now.

And if Fitbit can start turning things around and executing better, the high level of short interest could subsequently translate into a short squeeze as the bears bail on their positions by buying shares.

Fitbit seems highly aware of the predicament that it now finds itself in. The company began pursuing its acquisitive smartwatch strategy about a year ago with the Coin deal, and in January announced a restructuring that would bring costs in line with dampened growth expectations; management is targeting total operating expenses of $850 million this year. Two high-level executives -- Chief Business Officer Woody Scal and Executive Vice President of Interactive and Design Tim Roberts -- are leaving this month as part of the restructuring.

The point is that Fitbit is being proactive in making the tough decisions given the difficult circumstances, which is a lot more than some other struggling companies can say. We also know that Fitbit is fully capable of being profitable when it's not overinvesting in growth that may not materialize; Fitbit enjoyed $175.7 million in positive net income in 2015, good for a 9% net margin, before swinging to a loss in 2016.

I'm no Fitbit bull by any stretch of the imagination, but the incredibly cheap valuation seems to represent a potential opportunity if the company can have a better 2017. That's a big "if," but the risk-reward trade-off doesn't look so bad right now.