The 9.7-inch iPad Pro is undoubtedly better, but is it nearly twice as good?

Apple's (AAPL 1.62%) new iPad goes on sale tomorrow, following the product announcement earlier this week. The aggressive new pricing strategy is analogous to what the company did a year ago with the $400 iPhone SE: Put current specs in a slightly older form factor and offer it at an extremely affordable price.

However, there's a big difference with how Apple is positioning the new iPad. The Mac maker is running a very big risk that it will cannibalize the higher-end 9.7-inch iPad Pro. 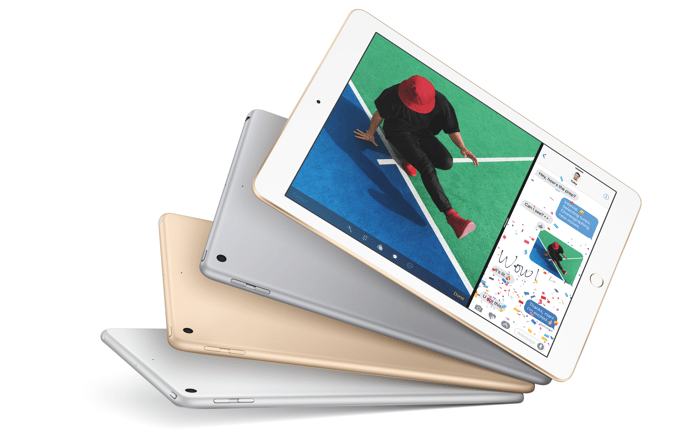 In the case of the iPhone SE, the handset was catering to the crowd that still prefers smaller 4-inch displays, which is a different market segment than the 4.7-inch models that are the most popular. The form factor and display size is different enough that they target different consumers. Additionally, the price difference is about $250 ($399 vs. $649).

There's no doubt that the Pro version is better in numerous ways. It also has a fully laminated display with a wider P3 color gamut as well as the True Tone technology that adjusts the display to match the environment. The cameras are also better, but let's be honest: Taking pictures with any tablet should be a last resort. The Pro model is just a wee bit thinner and lighter.

Apple Pencil support will only matter to the subset of the market who are more artistically inclined or need a stylus for professional reasons, but all iPads can support Bluetooth keyboards, so the Smart Keyboard support is less important. Who knows, maybe Rose Gold enthusiasts will pay the premium since that color is reserved for the Pro.

Simply put, the Pro version has several small incremental advantages over the non-Pro version, but collectively the slightly better specs aren't nearly twice as good. The risk is that 9.7-inch tablet buyers may flock to the new iPad instead of the 9.7-inch iPad Pro.

Apple has never worried about cannibalization

Cannibalization is something that Apple has never worried about. Steve Jobs famously said he'd rather Apple cannibalize itself than let someone else do it, and the tablet market has been flooded with lower-cost Android tablets over the past few years. The new iPad will definitely compete better against those tablets, and the opportunity there could offset the cannibalization risk of the Pro.

If the new iPad proves to be popular, which seems likely given the aggressive pricing, there would be some expected margin and average selling price dilution. But even if iPad margins get diluted in percentage terms, Apple can potentially make up for it in dollar terms through higher unit sales.