The Organization of the Petroleum Exporting Countries, or OPEC, controls a significant portion of the world's oil reserves. These 12 countries have historically used this position as the global energy gorilla to affect oil prices and to move markets.

And while the emergence of shale oil production, driven by technological advances including horizontal drilling and hydraulic fracturing, has led to a resurgent North American oil and gas production industry and shifted the balance of power slightly away from OPEC, the oil cartel continues to dominate global oil markets. 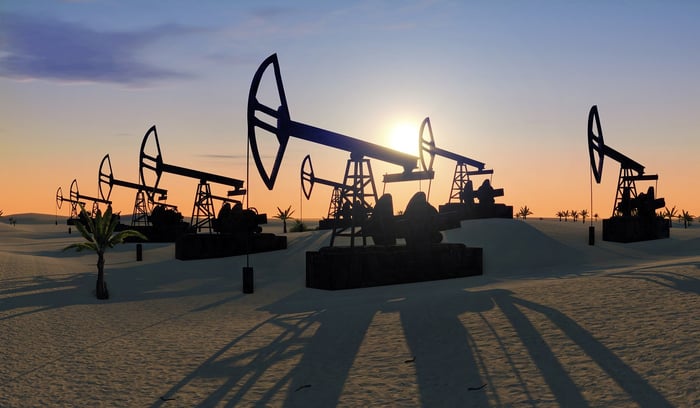 Here's a closer look at just how much oil comes out of these 13 countries, and how the different OPEC countries are affected by oil prices.

According to the U.S. Energy Information Administration, 96 different countries produce crude oil, with estimates ranging between 90 and 96 million barrels per day produced in February 2017. Of this total, the 13 OPEC nations produced one-third of that oil: 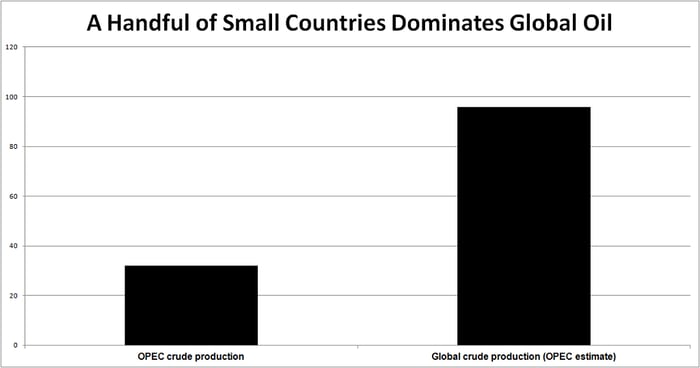 In millions of barrels per day. Source: OPEC.

Here's some added context on how outsized OPEC's position really is

If we further parse OPEC by its share of global landmass and population, it becomes even more striking how much power these 13 countries wield over global energy. First, population: When it comes to land area, OPEC's share of the world's oil is even more dominant: 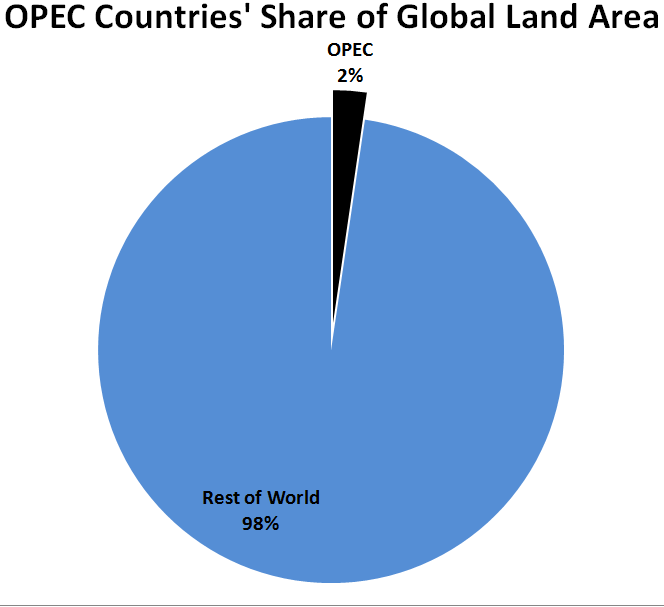 Breaking down production by member country

When most people hear "OPEC," they think of the Middle East, and an outsize portion of OPEC's total production does come from Saudi Arabia, Iran, Iraq, Qatar, Kuwait, and the United Arab Emirates. But the consortium also includes African nations Libya, Nigeria, Algeria, Angola, and Gabon, as well as the Central and South American countries of Ecuador and Venezuela.

Here's a breakdown of oil production from each country in February 2017: 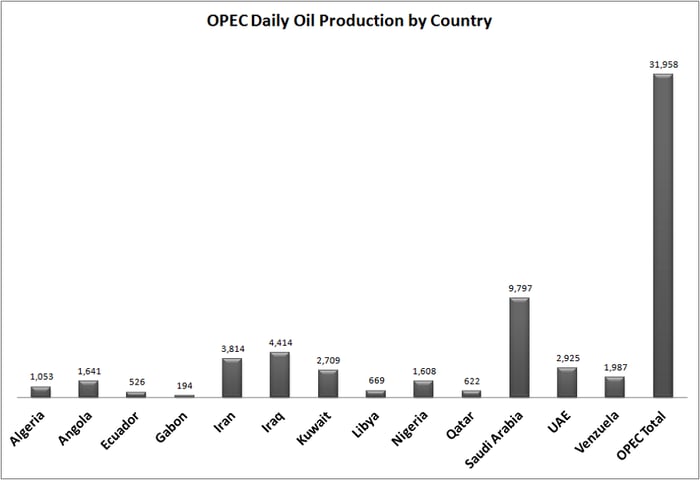 As the table above shows, the individual size of OPEC member's oil production varies greatly. Yet six of the 10 largest oil-producing countries in the world are OPEC members. Combined, these six countries -- Iran, Iraq, Kuwait, Saudi Arabia, United Arab Emirates, and Venezuela -- account for over 80% of OPEC's total output.

While OPEC produces a significant amount of the planet's total oil, there are significant differences in production capabilities, the kind of oil produced, and the costs of production from one OPEC country to the next.

For instance, Saudi Arabia, Iran, and Iraq have some of the cheapest oil production in the world. Sitting on massive, shallow, land-based oilfields, these countries have cash production costs less than $10 per barrel in many areas. On the other hand, many of OPEC's other countries struggle to make money when oil prices fall below $50 per barrel.

This has historically been a challenge for OPEC, as member states fight internal battles over maintaining global market share versus cutting production in order to increase prices. This is especially true considering that its biggest producers also have some of its lowest production costs, while many of its smaller members have much higher per-barrel costs.

National politics may be equalizing the need for higher prices

During the oil downturn, OPEC maintained a policy of steady output in order to keep market share. However, low oil prices have steadily weighed on even the low-cost producers. The Saudi ruling family has made major social commitments in recent years, essentially all of which were funded by oil revenues. Some experts estimate the country would need oil to sell for $80 per barrel or above to balance its national budget.

This was one of the key drivers behind a late-2016 agreement between OPEC and several major non-OPEC countries to cut oil output for the first time in years, in an effort to restore balance to global oil markets and push prices higher. Combined, the agreement, which included OPEC, Russia, and several other oil-producing nations, was to cut total oil production by nearly 2 million barrels per day.

According to a combination of primary and secondary sources as reported to date, February output was down a half-million barrels per day from December, well short of the 1.5 million barrel cut OPEC agreed to take. Using past production cuts as a guide, it's probably overly optimistic to expect OPEC to cut its output by anything more than two-thirds of the level its member states agreed to in 2016. This is particularly true with Iran working hard to add as much as 1 million barrels per day to its production from 2015 levels as it attempts to recover from years of sanctions.

At the end of the day, OPEC is a bizarre mix of countries ranging from close allies to nearly at-war enemies. Yet they all have a common interest in wielding a significant amount of influence on global oil markets. Whether that influence will drive a rebalancing of global supply and demand after years of oversupply and low prices remains to be seen.