Could you double your money in the next 12 months? According to Wall Street, you potentially can.

Analysts think the share prices could soar by at least 100% by a year from now for three biotech stocks: Celldex Therapeutics (CLDX -3.13%), Idera Pharmaceuticals (IDRA 2.00%), and Opko Health (OPK -2.32%). Here's why they're so optimistic about these stocks. 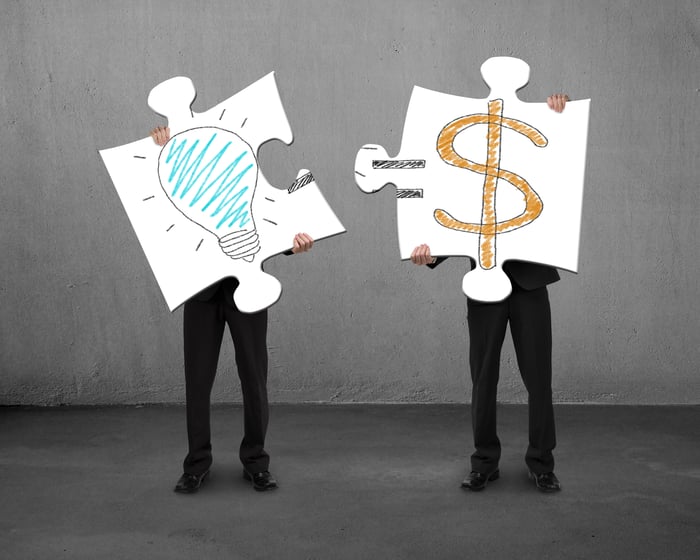 Celldex Therapeutics: A loaded pipeline for a clinical-stage biotech

Celldex is still recovering from the failure of experimental glioblastoma vaccine Rintega in a late-stage study last year. However, the small biotech has other pipeline candidates that could enable it to still achieve success.

Glembatumumab vedotin (glemba) could potentially be Celldex's first drug on the market. The fully human monoclonal antibody-drug conjugate (ADC) is in a pivotal phase 2 study targeting treatment of triple-negative breast cancer. Celldex should report top-line results from this study in 2018.

A couple of phase 2 studies of glemba sponsored by third parties are also in progress, one targeting uveal melanoma and the other targeting squamous cell lung cancer. On top of these studies, Celldex is evaluating three experimental cancer drugs in early-stage studies.

The most excitement, however, has focused on another of Idera's pipeline candidates -- IMO-2125. Idera recently provided an update from its ongoing phase 1/2 study of the TLR9 antagonist in combination with Bristol-Myers Squibb's Yervoy in treating melanoma.

Checkpoint inhibitors like Yervoy have achieved significant success in battling melanoma, but many patients don't experience benefits from taking the drugs. Early results indicate that IMO-2125 could hold promise for helping these patients.

Idera hopes to quickly advance IMO-2125 to a registrational study. The company is also studying the experimental immuno-oncology drug in combination with Merck's Keytruda.

Opko Health: Diagnostics, drugs, and more on the way

Unlike Celldex and Idera, Opko Health already has products on the market. The company operates the third-largest clinical laboratory in the U.S. with a core genetic testing business. Its diagnostics business also includes the 4Kscore prostate cancer test. And Opko has two approved drugs with Rayaldee and Varubi.

Rayaldee, in particular, should have considerable potential. The drug was approved in June 2016 for treating secondary hyperparathyroidism (SHPT) in adults with stage 3 or 4 chronic kidney disease (CKD) and was launched commercially in the fourth quarter of last year.

Opko's pipeline could have several potential winners. There has been intense interest in the company's human growth hormone hGH-CTP, which Opko is developing in partnership with Pfizer. Opko reported disappointing results from a late-stage study of hGH-CTP at the end of last year, but still plans to push for regulatory approval.

The company also plans to initiate three phase 2 studies in the second half of this year and early next year. One of these studies is for an additional indication for Rayaldee in treating SHPT for patients on dialysis. The other two studies will focus on TT701 in treating benign prostate hyperplasia and TT401 in treating type 2 diabetes and obesity.

It's tricky for Wall Street analysts (or anyone else, for that matter) to accurately predict what might happen for stocks that depend so much on variables like clinical study results and regulatory decisions. Any of these three companies could experience setbacks (like Celldex did last year with Rintega).

That's the reality of investing in biotech stocks. It's a classic example of risk versus reward. The potential to double is accompanied by the potential for trouble.