Many companies have increased their dividends every year for more than 25 years, but there are some we aren't buying. Here are three.

Believe it or not, there are more than 100 public companies with the incredible record of increasing their dividend every single year for at least 25 years. Called "Dividend Champions," these stocks have made for some of the best investments of the past several decades. But all good things eventually come to an end -- or to a time when they might not be that good for a while.

In the article below, our contributors explain why they have zero interest in buying Tootsie Roll Industries, Inc. (TR -0.40%), AT&T Inc. (T 0.41%), or The Coca-Cola Company (KO 1.02%). If any of these stocks are on your radar (or in your portfolio), it's probably worth your time to read why we have a much more bearish view. 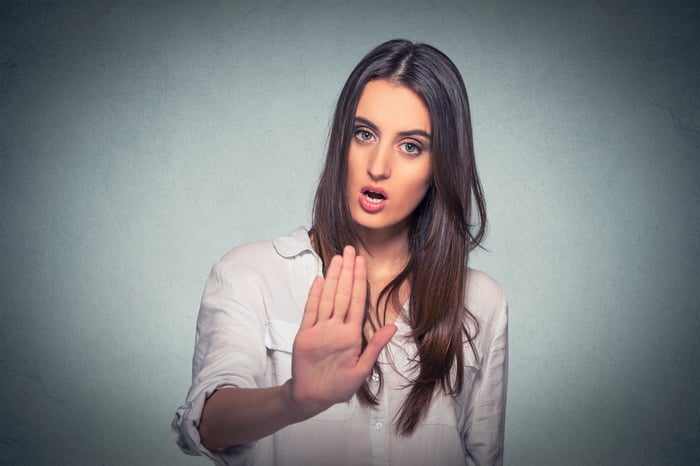 What you pay matters as much as what you buy

Jason Hall (Coca-Cola): As you can see in the disclosure at the bottom, I manage a family account with Coke shares in it. But that's a far cry from putting cold, hard cash down to acquire new shares today. Because the bottom line is: I can't imagine paying such a steep premium for a business that's facing more competition and less consumer interest with each passing year.

Don't get me wrong: Coke remains one of the most recognized brands on the planet, produces an incredibly profitable product, and has one of the best, most efficient distribution networks on Earth. These are still competitive advantages that will help the company make a lot of money for many years to come, and to continue returning more of it to shareholders.

But Coke trades at nearly 29 times last year's earnings. A lot of great companies trade at much more reasonable valuations, and many of them also have far better growth prospects. I'll continue to hold the few shares I manage currently, and if something changes that makes the stock more attractive -- like the price falling, bringing the value more in line with likely future returns -- I'll reevaluate Coke as being buy-worthy.

Yet with its current nosebleed valuations, I see opportunities better than Coke to invest in now.

Cory Renauer (Tootsie Roll Industries, Inc.): Income-seeking investors can find a lot to like about this Dividend Champion. Its iconic brands are an extremely durable competitive advantage. The steady source of profits has allowed it to raise cash dividend payouts for 50 consecutive years. Last year it used just 33% of profits to make those payments, suggesting room for more in the years ahead. It also treats investors to a 3% annual stock dividend, which sweetens the dismal 0.9% cash dividend yield considerably. 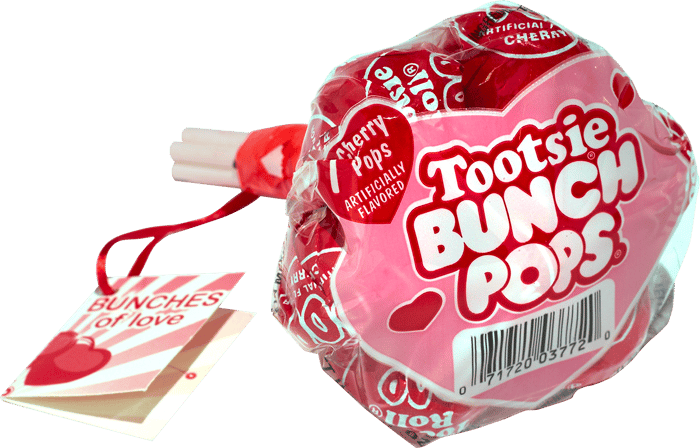 Unfortunately, a much longer list of troubling features make this one Champion I refuse to buy. At the top is a level of opacity that Willy Wonka would be proud of. The company doesn't conduct earnings calls, grant interviews, or allow factory tours.

Corporate governance issues abound as well. A couple years ago Melvin Gordon, Tootsie Roll's leader of more than 50 years, passed away at the age of 95 and was succeeded by his wife Ellen. Although she's supremely qualified, there probably won't be any major changes unless she approves them. She holds heaps of shares and has significant voting privileges.

On top of the secrecy, and lack of shareholder representation, sales have been sliding for years, and the stock is terribly expensive. Total annual revenue peaked a few years back, and last year's $124.3 million was a 4% drop from the previous year. It's also been trading at about 36.6 times trailing earnings recently. That's just way too much for a secretive company on a years-long slide.

Don't be fooled by the glitzy dividend numbers

Anders Bylund (AT&T): At first glance, AT&T has it all. The telecom giant has raised its dividend payout in each of the last 32 years, dividend checks absorb just 70% of the company's generous free cash flows, and the company is one-half of a near-duopoly in the American wireless communications market. And who can complain about a 4.6% dividend yield, backed by cash and a reputable household name?

Those annual payout boosts may have been consistent, but also consistently anemic. The average increase over the last 12 years was an unremarkable 3.8%, while a true Dividend Master like Coca-Cola (KO 1.02%) delivered annual payout lifts of nearly 9%: 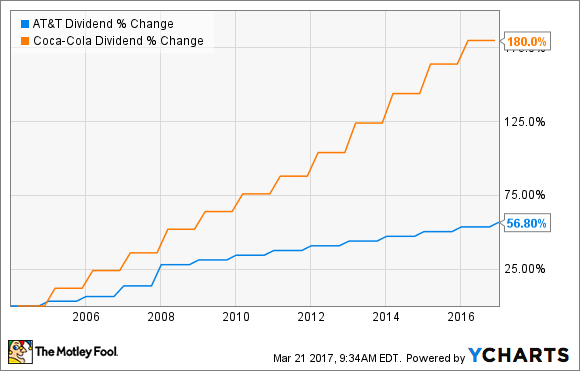 AT&T is doing the bare minimum to stay on that coveted list of Dividend Champions -- and for good reason. The company's hold on the market is threatened by innovative upstarts, often challenging it to adopt new business policies just to stay relevant. I can't remember the last time AT&T led the way with significant innovation in technology or customer service, and the company has settled for growth by acquisition in recent years.

I'm not saying that AT&T is about to stop paying dividends, nor that the steady stream of payout increases is reaching its end. But despite Ma Bell's impressive first-look dividend stats, income investors can simply do much better elsewhere.