One common mistake income-seeking investors make when choosing between two investment options is to buy the company with the higher yield. Based on that metric alone, most income investors would immediately pick ONEOK (NYSE:OKE) and its 4.6% current yield over Kinder Morgan's (NYSE:KMI) 2.4% payout without giving things a second thought. However, before blindly buying the higher yield, there are a few things investors need to know about ONEOK's current plan, which, in my opinion, tip the scale in the opposite direction.

Before we dive in and take a look at the financials of both companies, there is something investors need to know about ONEOK. It's in the process of acquiring its master limited partnership (MLP) ONEOK Partners (NYSE:OKS) in a stock-for-unit deal that should close later this year. That deal will have a significant impact on the combined company's financial metrics.

That said, here's where these companies stood at of the end of the fourth quarter:

As that chart shows, as stand-alone entities, ONEOK and ONEOK Partners had quite different credit metrics. ONEOK Partners boasted a solid investment-grade credit rating, even though its leverage ratio was much higher. However, that's primarily due to how rating agencies view the financial security of general partners like ONEOK, whose only asset is its stake in its MLP. That relationship added complexity and costs, which is why these companies had vastly different credit ratings despite owning the same underlying assets.

Given those expectations, ONEOK's balance sheet appears to give the company a slight edge over Kinder Morgan because it would have a lower leverage ratio and a slightly higher credit rating from at least one of the rating agencies. 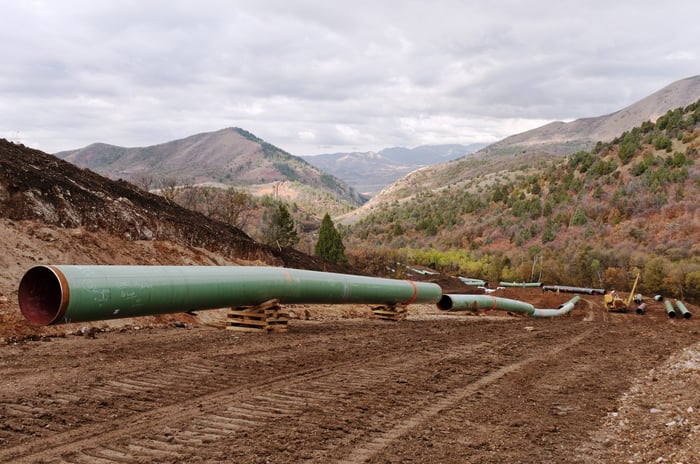 Aside from shoring up its credit situation, another reason why ONEOK wants to acquire ONEOK Partners is that the combined entity would have a clearly stated dividend growth forecast. ONEOK anticipates that once the deal closes, it can increase an already generous dividend by 21%. Furthermore, it expects to deliver 9% to 11% annual dividend growth through 2021 while maintaining a coverage ratio of more than 1.2. However, the one red flag that stands out is that ONEOK doesn't have a clearly visible pipeline of growth projects lined up to support those assumptions. That said, the company does operate assets in two of the fastest-growing shale plays, so there is reasonable certainty that it can capture enough growth opportunities to meet its ambitious dividend growth targets.

Kinder Morgan, on the other hand, has a very visible five-year project backlog totaling $12 billion of primarily fee-based projects. The company anticipates that these projects will deliver $1.6 billion of incremental adjusted EBITDA annually by 2021, which would be 22% earnings growth. That additional cash flow gives Kinder Morgan options, including the likelihood that it will start growing the dividend once again, with the potential for it to deliver a substantial increase by the end of this year.

We've seen this story before

On the surface, ONEOK appears to be a slam-dunk better buy because it pays a much higher dividend right now and has a clearly stated dividend growth plan. However, its projections are no different from the forecast Kinder Morgan gave a couple of years ago when it pioneered the path by rolling up its MLPs. At that time, the company said that the deal would enable it to deliver an immediate 16% increase in the dividend while positioning it to grow the payout by 10% per year for the next five years. Further, it could deliver that growth while maintaining a coverage ratio of around 1.10 over that time frame. Finally, it stated that the credit rating agencies had blessed the deal, expecting to award the combined entity with an investment-grade credit rating.

Fast forward one year later, and the deepening oil market downturn torpedoed those plans. Instead of delivering double-digit dividend growth, the company slashed its payout 75% and redirected that cash flow to finance its growth projects and pay down some debt after a rating agency warned that the pipeline giant's credit was at risk of being downgraded to junk. The company would go on to complete several strategic transactions to shore up its balance sheet and secure outside capital to finance a portion if its growth projects. Because of this, the company is on pace to restart dividend growth within the next year, with analysts anticipating that it could choose to pay out 50% of its cash flow going forward, which would give it a coverage ratio of roughly two, which is a much more sustainable long-term model.

For ONEOK to deliver on its dividend growth plan, it will need to secure additional growth projects and find financing for them, which is a tall order considering that it expects to pay out about 80% of its cash flow. Kinder Morgan tried that before and failed. Because of that, I think Kinder Morgan is the better buy right now. It's more likely to start paying investors more money, while ONEOK faces a heightened risk it could stumble in its attempts to meet its ambitious growth plan.