Intel Corporation's planned acquisition of Mobileye N.V. has made investors wonder if there are other companies working on products for the self-driving vehicle market that may become targets for acquisition. Intel will have no trouble ponying up a staggering $15.3 billion, or more than 40 times sales, for Mobileye, raising hopes of a lucrative payday for investors in other companies that self-driving players might like to acquire.

Dougherty & Company's Charles Anderson (via Barron's) believes that Ambarella (NASDAQ:AMBA) may be the next logical candidate to be acquired by a company that wants to participate in the autonomous-driving market. The basis for his theory lies in the company's deep technical knowledge of camera-based system on chips (SoCs) in combination with its developing computer vision technology. Ambarella began investing in computer vision technology when it acquired VisLab in July 2015 for $30 million in cash. Vislab was able to provide a proof of concept by maneuvering a self-driving vehicle from its home country of Italy to China. Ambarella initially used VisLab technology in products that could recognize humans (versus other animals) for security cameras to reduce the number of false alarms sent to security companies.

Ambarella has taken the work that VisLab had done on a fully integrated software stack and built it into its first computer-vision chip called CV-1. The SoC is currently in the fabrication process and sample quantities are expected to be available on a limited basis by summer. The expected initial customer base includes drone manufacturers and internet-connected security camera companies. Auto manufacturers are not planned to be in the initial sampling process. The chip is expected to go into full production in 2018.

On Ambarella's most recent quarterly earnings call, CFO George Laplante talked about Ambarella's plan to continue to spend on the development of its computer vision product line as well as the auto original equipment manufacturer (OEM) market.

The company recognizes the importance of this technology development for its future and is committed to increasing its spending on operations by 12% to 14% year over year to make sure the R&D team can focus enough resources to make this technology a success. "The increase in OpEx is directly related to expansion of our development efforts in support of computer vision technology for all markets as well as substantial investment targeted at the auto OEM markets," said Laplante. Note that management has decided to keep this spending increase in their plan knowing revenue will be flat for the year due to a key design loss at GoPro, Inc.

Ambarella has consistently made money for shareholders. The chart below shows its earnings before interest, taxes, depreciation, and amortization (EBITDA); revenue; and increasing supply of cash. The company finished its most recent fiscal year with $405 million in cash, cash equivalents, and marketable securities. The company has no long-term debt. 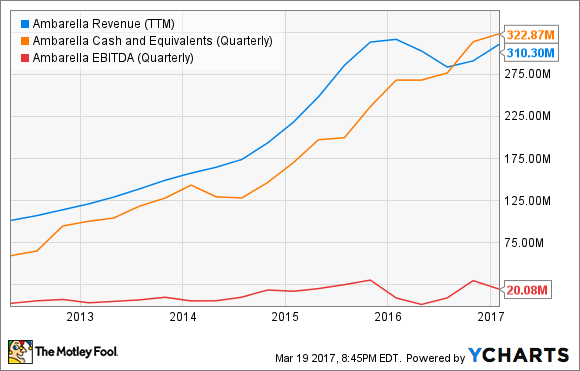 Ambarella has a market cap of $1.88 billion, a trailing price-to-earnings (P/E) ratio of 34, and sells at a multiple to sales of 6. That is a far cry from the 40-plus multiple to sales that Intel is paying to acquire Mobileye.

What would be the risk to a potential acquirer?

An acquirer would be taking a chance on Ambarella's ability to roll out yet unproven technology. On the other hand, the company has a sound business model that on its face provides an acquirer with a growing business that has consistently delivered results. Ambarella has been delivering camera-based SoCs for years.

If a potential acquirer does make a bid, shareholders have an experienced CEO at the helm who has been involved in company buyouts from both sides of the table. In addition to Ambarella's cash buyout of Vislab, Fermi Wang was on the receiving end of an acquisition offer from Sun Microsystems as the CEO of Afara Websystems. In 2002, Afara accepted an offer and was purchased by Sun.

Patient shareholders should be able to sit back and let the story play out. We will have a lot more information about the CV-1 chip once customers begin to evaluate it later this year. Until then, we can expect to be updated quarterly on new design wins and opportunities that Ambarella uncovers with its new computer vision products.