The stock market started the week in mixed territory on Monday as investors mulled the potential for legislative roadblocks on the Trump administration's promise for pro-growth tax reform and infrastructure spending. Late last week, Republicans failed to gather enough support for their healthcare reform bill to pass a key House vote.

Even so, the Dow Jones Industrial Average pared an early triple-digit decline to close down around 0.2%. Other broader market indexes saw similar early negative moves, though the Nasdaq ultimately closed up 0.2% while the S&P 500 fell 0.1%. But several individual stocks bucked the bearish trend, including Fitbit (NYSE:FIT), Exact Sciences (NASDAQ:EXAS), and Sears Holdings (NASDAQ:SHLDQ). Read on to see what drove these positive moves. 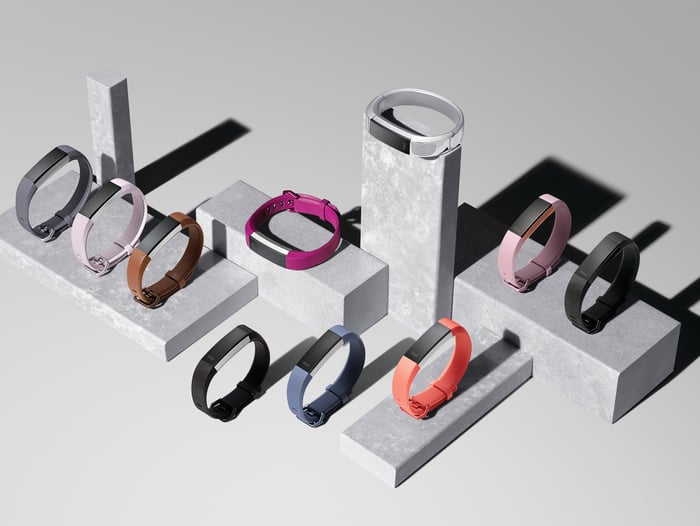 Shares of Fitbit climbed 5.6% Monday after the wearable technology specialist announced global availability of its new Alta HR fitness wristband. Touted by Fitbit as the the world's slimmest fitness wristband to include continuous heart rate tracking, the Fitbit Alta HR family is now available on Fitbit's website and at most major retailers. Alta HR also features automatic exercise recognition, sleep tracking, smart notifications, and can run on a single battery charge for up to a week.

Shares of Fitbit are still down more than 60% over the past year amid disappointing sales of its flagship hardware products. The company has shown very little progress diversifying into software and services following its $25 million acquisition of coaching app FitStar in 2015. But many investors are now looking at the Fitbit stock as a speculative turnaround play, and it's clear they're hoping the new Alta HR proves a step in the right direction to that end.

Sears Holdings stock climbed nearly 11% today as opportunistic investors took advantage of the struggling retailer's recent plunge. For perspective, Sears Holdings stock dropped as much as 16.5% last Wednesday after the company revealed in its annual 10-K filing with the SEC that "substantial doubt exists related to the company's ability to continue as a going concern."

To be fair, Sears also voiced its belief that management's recent actions to turn around the business -- including the sale of its Craftsman brand, as well as closing 108 underperforming K-Mart stores and 42 Sears locations -- will prove effective in driving cost savings and mitigating that doubt. If that turns out to be the case and Sears can indeed save what many view as a sinking ship, investors who bought shares following last week's drop could be in for more significant gains going forward.

A positive initiation for Exact Sciences

Finally, shares of Exact Sciences rose 9.1% after Cowen analyst Doug Schenkel initiated coverage on the colorectal cancer detection specialist with an outperform rating and a per-share price target of $30. Shares closed Monday after the pop at $22.99.

What's more, because colon cancer is the second-leading cause of cancer death in the U.S., Exact Sciences should be able to grow annual revenue at a roughly 50% clip over the next five years as the company targets $4 billion of an approximately $15 billion annual market. So even with shares of Exact Sciences having nearly quadrupled over the past year, Cowen believes the stock has even more room to run going forward.