The stock market began the week in mixed territory on Monday as investors considered the affects of potential legislative roadblocks on the Trump administration's promise for pro-growth tax reform and infrastructure spending. Late last week, Republicans failed to gather enough support to push their healthcare reform bill through a key House vote.

When all was said and done today, the Dow Jones Industrial Average pared an early triple-digit decline to close down around 0.2%. Other broader market indexes saw similar early negative moves, though the Nasdaq ultimately closed up 0.2% while the S&P 500 fell 0.1%. But several individual stocks left investors dealing with more painful drops today, including G-III Apparel Group (NASDAQ:GIII), Sierra Wireless (NASDAQ:SWIR), and Netgear (NASDAQ:NTGR). Read on to learn what happened. 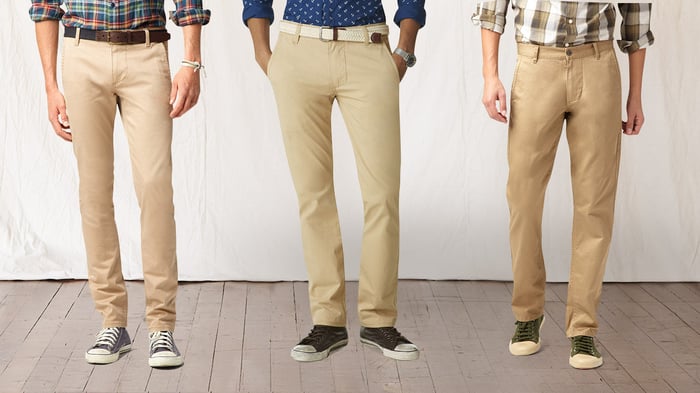 Shares of G-III Apparel Group declined 14.1% after the company announced weaker-than-expected fiscal fourth-quarter 2017 results. Best known as the parent company of brands like GUESS, DKNY, Calvin Klein, Tommy Hilfiger, Levi's, and Dockers, G-III saw revenue in its most recent quarter climb 14.4% year over year, to $603 million, as strength in its non-outerwear wholesale business and its acquisition of Donna Karan International (DKI) last year more than offset weakness in its retail business. On the bottom line, that translated to an adjusted net loss of $0.16 per share. Analysts, on average, were anticipating a narrower adjusted net loss of $0.10 per share on higher revenue of $622.8 million.

G-III CEO Morris Goldfarb noted that his company's outlook includes the dilutive impact of its DKI acquisition, and expressed excitement for the midyear relaunch of both DKNY and Donna Karan.

"We are confident that we have one of the most desirable portfolios of brands in the industry and that DKNY and Donna Karan will quickly take their place alongside Calvin Klein, Tommy Hilfiger, and Karl Lagerfeld as the cornerstone brands for the growth of our business," added Goldfarb.

A downgrade for Sierra Wireless

Of course, shares of Sierra Wireless have also climbed nearly 80% so far in 2017 (even after today's drop), most recently including a 29% single-day pop last month after the company detailed strong design win momentum, normalizing demand from existing customers, and expense-management efforts for its impressive fourth-quarter 2016 results.

To help justify his tempered enthusiasm today, Li noted that Sierra Wireless' recent high-volume contract wins may come at the expense of margins, even though those contracts won't ramp completely for another two years. Even so, given Sierra Wireless' meteoric rise in recent months, it's hardly surprising to see some on Wall Street taking a step back today.

A "strong" opinion on Netgear

Shares of Netgear are still up around 25% over the past year on the strength of its thriving retail business, which has more than offset declines of the company's restructured service provider business. Last month, however, shares dropped 10% in a single day after Netgear delivered strong fourth-quarter 2016 results but followed with lighter-than-expected revenue guidance to start 2017. At the time, management noted that seasonality for its Arlo IP cameras was more pronounced than that of its flagship Wi-Fi routers as it transitioned out of the key holiday quarter.