An eight-year bull market is great news for the financial industry, and the companies that serve major financial institutions have also done well. FactSet Research Systems (NYSE:FDS) has taken full advantage by offering its financial information services to high-profile clients, and coming into Tuesday's fiscal second-quarter financial report, FactSet shareholders wanted to see that growth continue. FactSet didn't disappoint on that score, and it sees even more opportunities to cultivate growth going forward.

Let's take a closer look at FactSet to see how it did and what's ahead for the financial information provider going forward. 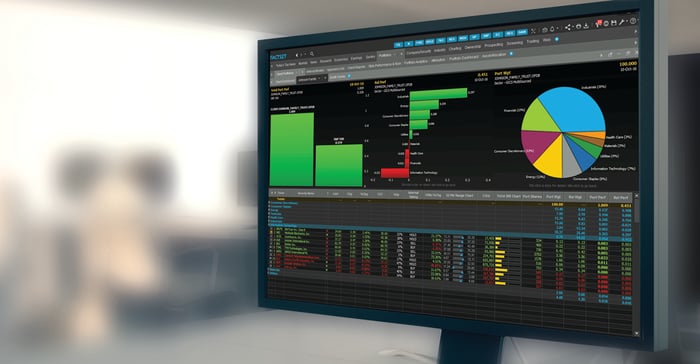 FactSet's fiscal second-quarter results were solid by most measures. Revenue was up 4.5% to $294.4 million, which was only a little slower than the 5% growth rate that most investors had wanted to see. Adjusted net income rose nearly 9% to $71.8 million, and that produced adjusted earnings of $1.81 per share, which was $0.01 higher than the consensus forecast among those following the stock.

Looking more closely at the numbers, FactSet's fundamental business success was once again evident. Annual subscription value climbed 6.5% to $1.19 billion, with about a quarter of those gains coming from organic growth that excludes acquisitions and currency impacts. As we've seen in past quarters, buy-side subscription value growth outpaced sell-side figures slightly, but both ends of the business appeared fundamentally healthy. The international market continued to reward FactSet to a greater extent than the U.S. market, with annual subscription value just barely rising domestically but posting double-digit percentage growth overseas.

FactSet's operational numbers were also impressive. Retention rates stayed above 95% in terms of annual subscription value and at 93% as a percentage of clients. Client count climbed above the 4,400 mark, although the company changed its definition to include clients with a lower amount of assets than in previous quarters. User count climbed to nearly 86,000, with another definitional change boosting the figures from earlier periods. Nevertheless, growth rates for both numbers were in the 2% to 4%, showing steady growth for the company.

CEO Phil Snow again expressed his pleasure with how FactSet is performing. "FactSet continues to be a leading technology partner for the investment community," Snow said, "delivering another quarter of growth in a market that remains challenging for the financial industry." He continued to emphasize the work that the company is doing internally to foster long-term growth opportunities.

FactSet believes that it can keep on moving forward with plans to boost long-term growth. In Snow's words, "Through product innovation and acquisition, we believe we are well-positioned to offer a broad suite of solutions across the enterprise for our clients' critical workflows." CFO Maurizio Nicolelli was equally optimistic, pointing to the strength of FactSet's financials. As he put it, "We believe that we will be able to grow ASV and maintain cost discipline as evidenced by our steady operating margins."

Its guidance for the fiscal third quarter was consistent with that optimistic assessment. The company expects revenue of $301 million to $307 million, with the recent acquisition of portfolio performance management and reporting specialist BISAM adding about $6 million to FactSet's top line. Adjusted earnings of $1.80 to $1.86 per share is also close to what investors already expect, but it would represent about 12% growth for FactSet's bottom line compared to year-ago figures.

FactSet investors didn't seem all that surprised by the news, and the stock didn't move sharply in pre-market trading on Tuesday morning following the announcement. However, if FactSet can continue to make smart strategic moves to boost its long-term business prospects, then it has the potential to keep climbing higher in the long run.