Please ensure Javascript is enabled for purposes of website accessibility
Log In Help Join The Motley Fool
Free Article Join Over 1 Million Premium Members And Get More In-Depth Stock Guidance and Research
By John Bromels - Mar 30, 2017 at 11:07AM

These oil industry heavyweights are reacting to the oil downturn in different ways. But one looks like a more solid buy for investors.

The oil rebound is just around the corner!

At least, that's what some folks have been saying for years as the weak energy market continues to drag along, oil companies slash dividends, and stock prices tumble. But recently, there have been some encouraging signs, with oil prices stabilizing above $50/barrel. And even if further recovery is still a ways off, several larger, established energy companies now have the resources to withstand continued market volatility.

Let's look at two of them -- ConocoPhillips (COP 3.24%), the largest independent U.S. oil producer, and BP (BP 1.29%), the third-largest publicly traded oil company in the world by revenue,-- to see which one looks like a better buy. 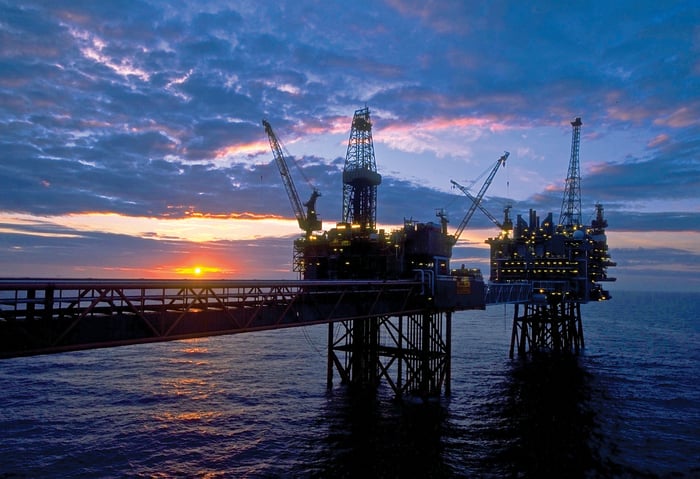 ConocoPhillips is exclusively an oil and gas exploration and production company, while BP is an integrated company that also refines and sells oil and gas. Image source: ConocoPhillips.

Particularly when a beleaguered industry is waiting for a turnaround, a dividend rewards patient investors until growth begins in earnest. And in the energy industry these days, a strong dividend can represent the difference between making and losing money.

BP's current dividend yield is a best-in-class 7.2%, destroying ConocoPhillips' 2.2% yield. But a high yield doesn't mean much if the company can't sustain it. ConocoPhillips, for example, slashed its dividend by nearly two-thirds, from $0.74/share to $0.25/share in early 2016.

Luckily, BP does have the resources to maintain its generous yield: It's sitting on an immense cash hoard of $23.5 billion, which it built up gradually over the several years since its Deepwater Horizon oil spill in 2010. That's massive compared to ConocoPhillips' $3.6 billion.

Rewarding patient investors is good in the short term, but a company still needs to position itself to succeed over the long term.

For BP, that means expanding its natural gas operations to provide growth even during a weak oil market. The company has staked its plans on three big gas projects: one in Oman, one offshore in Egypt, and one in the Caspian Sea. This isn't just a flash in the pan, either: BP projects that natural gas will make up 60% of its portfolio by 2025.

Unlike BP, ConocoPhillips hasn't made investments in natural gas. It's taking the opposite tactic and selling off between $5 billion and $8 billion of its substantial North American natural gas assets, and using the money to reduce its debt load. While that's good for the company's balance sheet in the short term, it may have consequences down the road.

ConocoPhillips is getting out of the risky and expensive business of deepwater exploration in order to free up capital and reduce expenses. So far, the company has sold its stake in three exploration blocks off of the coast of Senegal. It's also cutting costs, and has promised to trim its capital budget by 4% this year. These efforts have helped reduce the company's breakeven point by one-third, from $75 per barrel to $50 per barrel.

Now, that's likely to be a temporary low: If oil prices rise, some of the costs of doing business (particularly contracts with third-party oil services companies) are bound to rise as well. But for now, with Brent crude sitting just above $51 a barrel, the company can deploy the cash from its divestitures toward shoring up its balance sheet and rewarding shareholders with buybacks and higher dividends. It raised its quarterly dividend by 6% in January.

BP's breakeven point, on the other hand, has increased to $60/barrel, meaning it's currently losing money on every barrel of oil it pumps. The company has targeted a $50/barrel-$55/barrel breakeven point and admits that it expects a floor of $50/barrel to continue into the foreseeable future. Luckily for BP, it has extensive midstream and downstream operations to help prop up its currently unprofitable production arm; ConocoPhillips sold off its similar operations in 2012. Still, ConocoPhillips is now able to make money by pumping oil, and BP isn't.