Please ensure Javascript is enabled for purposes of website accessibility
Log In Help Join The Motley Fool
Free Article Join Over 1 Million Premium Members And Get More In-Depth Stock Guidance and Research
By Eric Volkman - Mar 30, 2017 at 9:01AM

Our trio for this installment in our series includes a Dividend Aristocrat, a video game retailer, and a cutting-edge REIT.

The first quarter of calendar 2017 is coming to a close, and with it a high number of dividend raises. As the curtain was being drawn, several companies announced that they'd be making their shareholders incrementally richer. Here's a closer look at three of those enterprises.

General Dynamics (GD -0.55%) is a freshly minted Dividend Aristocrat, one of the small group of stocks that have upped their dividends at least once annually for a minimum of 25 years in a row. Entirely in character, it's declared a fresh quarterly dividend raise -- by nearly 11% to $0.84 per share. 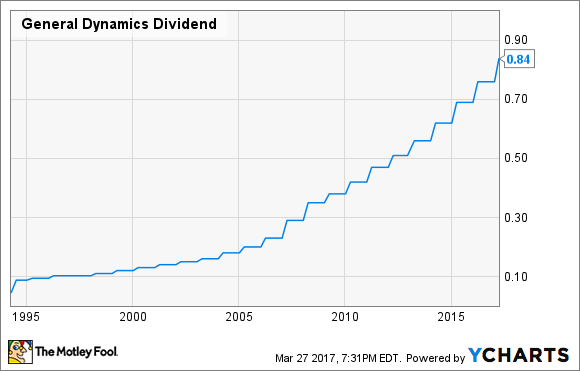 But do the company's results justify the hike? In its fiscal 2016, the top line ($31.4 billion) was essentially flat over the 2015 result, and adjusted net profit only crawled up by 3% to $3.18 billion. Forward guidance indicates unspectacular growth for 2017, although General Dynamics sounded an optimistic note about future years.

Meanwhile, both operating and free cash flow slid from the levels of the previous year. The latter came in at just over $1.8 billion, for a 6% slide. That amount was over $1 billion shy of the company's spending on dividends and stock buybacks, a habit it's developed over the years.

It isn't easy to become a Dividend Aristocrat, so I'd imagine General Dynamics will find a way to maintain that status. This will become much easier if, as expected, the U.S. ramps up its spending on defense. So I'd bet on the company to keep raising its dividend, but its spendthrift ways should concern investors.

General Dynamics' upcoming payout is to be dispensed on May 5 to shareholders of record as of April 7. At the stock's most recent closing price, it would yield 1.8%. That's a bit shy of the nearly 2% average yield of dividend-paying stocks on the S&P 500.

Investors should not have expected a higher raise. We're at the end of the cycle for the latest models of gaming consoles; as this technology ages, of course, sales of games made for the machines decline. Although the company has made encouraging strides in divesting its business -- ramping up its sales of game-related merchandise, most notably -- it remains at its core a game retailer.

As a result, recent financials have been discouraging. Sales in its fourth quarter -- which spanned the crucial holiday season -- dropped by nearly 14% on a year-over-year basis to slightly over $3 billion. Adjusted net income, meanwhile, fell by 3% to nearly $244 million. Forward guidance indicates sluggish top-line growth, at best, and lower net profit. The stock isn't a market darling these days; over the past year, its price has dropped by 28%. 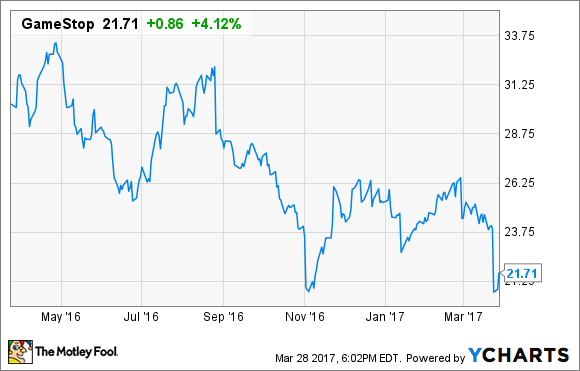 In spite of the weakened fundamentals, GameStop's free cash flow remains well in the black, and for the entirety of fiscal 2016 was high enough to cover both the dividend and the year's share repurchases. Yet the company is at a challenging phase now, so if those dividend raises continue, they'll likely be marginal like this most recent one.

GameStop's raised dividend was paid on March 28 to stockholders of record as of March 14. Because of that erosion in share price, its yield has risen to nearly 7%.

Specialty real estate investment trust Digital Realty Trust (DLR -5.32%) is also a member of the once-per-year raise club. The company recently declared a fresh $0.93 per share quarterly dividend, which is nearly 6% higher than its predecessor. 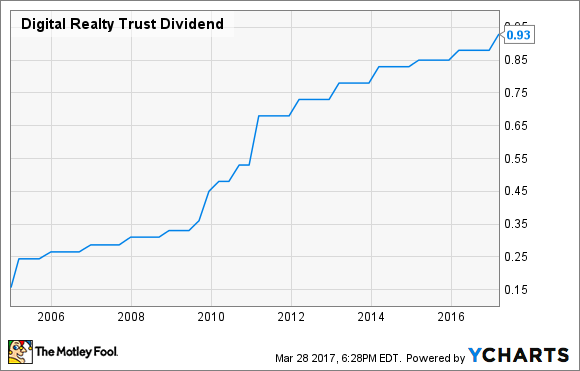 Digital Realty Trust is a REIT that operates data centers, which is a fine business to be in these days. With the proliferation of smartphones and other data-chewing devices, the need for data storage is growing rapidly -- it is expected that global IP traffic will rise by nearly 80% from 2017 to 2020 alone.

This REIT, with its 156 data centers concentrated mostly in the U.S., is making good coin satisfying that need. In its fiscal 2016, the company managed to boost its revenue by a sturdy 21% (to $2.14 billion). Its adjusted funds from operations -- the most important profitability metric for REITs -- rose at a 31% clip to almost $811 million, or $5.30 per share.

Meanwhile, it paid out $3.52 per share in dividends that year (REITs are required to dispense nearly all of their net profit as dividends; however, the net profit and FFO figures can vary widely -- as in Digital Realty Trust's case). That means the company had plenty left over for that distribution raise; this, combined with the rosy prospects for the industry as a whole, bodes very well for the future of its dividend.

Digital Realty Trust's latest payout was to be dispensed on March 31 to investors of record as of March 15. It yields 3.6% on the most recent closing share price.