These stocks lagged the broader market today. Here's what investors need to know.

The stock market rose on Thursday as investors considered encouraging new economic data. According to the Commerce Department, U.S. gross domestic product increased at an annualized 2.1% in the fourth quarter -- above its previously reported 1.9%, but also a deceleration from the 3.5% GDP growth realized in the third quarter. By the end of the day, the Dow Jones Industrial Average, S&P 500, and Nasdaq indexes had each climbed around 0.3%. 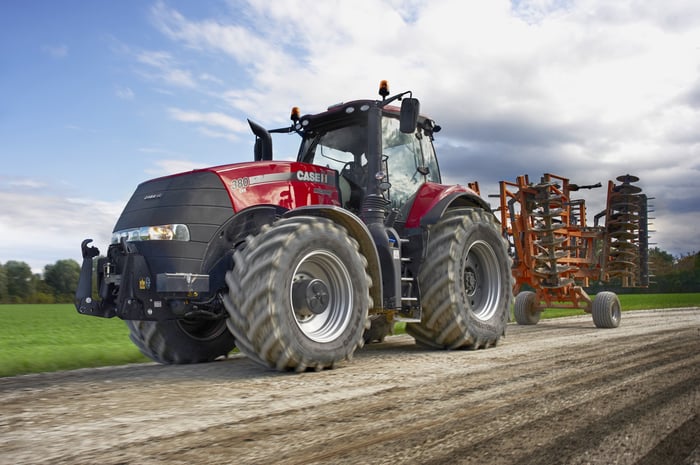 Shares of Titan Machinery fell 5.2% after the agricultural and construction equipment dealer announced weaker-than-expected results for the quarter ended Jan. 31, 2017. Quarterly revenue declined 5.3% year over year, to $317.6 million, primarily driven by a 6.9% decline in equipment revenue, to $226.9 million. On the bottom line, that translated to an adjusted net loss (including non-controlling interest) of $6.6 million, or $0.31 per diluted share, narrowed from an adjusted net loss of $30.6 million, or $1.31 per share in the same year-ago period. By comparison, analysts' consensus estimates called for an even narrower net loss of $0.21 per share, but on lower revenue of $313.3 million.

"Throughout fiscal 2017, we took the necessary steps to manage through difficult operating conditions, including reducing our operating expenses and reducing our equipment inventory levels by $197 million, which enabled us to continue to generate solid adjusted cash flow from operations," elaborated Titan CEO David Meyer.

Titan Machinery further anticipates those difficult conditions will continue into fiscal 2018, though the company should be able to return to adjusted profitability. Coupled with the benefit of reduced inventories, lower floorplan payables, and lower long-term debt, Meyer believes the company will be better poised to handle these headwinds and capture profitable growth opportunities going forward.

SAIC sinks on a miss

Science Applications International Corp stock fell 13.1% after the technology integrator delivered its own disappointing fiscal fourth-quarter results. For the quarter ended Feb. 3, 2017, SAIC's revenue declined 4.2% year over year, to $1.026 billion, with the decline driven partly by a combination of lower subcontractor activity within the company's AMCOM contract portfolio, the recompete loss of an IT integration program for the Department of Homeland Security, and customer delays on a Marine Corps IT services program. SAIC noted these declines were offset by revenue collected under new programs, including the Amphibious Combat Vehicle and GSA Enterprise Operations.

On the bottom line, that translated to net income of $36 million, while adjusted net income per share increased 7% year over year, to $0.79. Analysts, on average, were looking for earnings of $0.80 per share on higher revenue of $1.09 billion.

On one hand, Worthington Industries chairman and CEO John McConnell called it a "very good third quarter performance," with "near record earnings" in the steel processing segment thanks to higher steel pricing and higher tolling volume. Demand for both helium and camping cylinders also improved the pressure cylinders segment. On the other hand, within the latter business, Worthington also continued to endure soft demand from oil and gas markets.

"We believe the economy continues to strengthen though unevenly, with certain markets not as robust as others," McConnell added. "After a record first and second quarter and a strong third, we anticipate finishing our fiscal year well."