Wal-Mart (NYSE:WMT) is the king of retail. Well, it's the king of brick-and-mortar retail. When it comes to online sales, it's still well behind Amazon.com (NASDAQ:AMZN). Wal-Mart, though, is spending heavily to catch up, acquiring Jet.com and several other e-commerce websites over the past year.

But for all Wal-Mart's efforts, Amazon is still widening the gap. Amazon accounted for over half of U.S. e-commerce growth last year, according to some estimates. And e-commerce is by far the biggest driving factor of overall retail growth in the United States. E-commerce accounted for 9.5% of all retail in the fourth quarter, according to the U.S. Census Bureau. Online sales increased around 15% for the year, while the overall industry was up just about 3%. 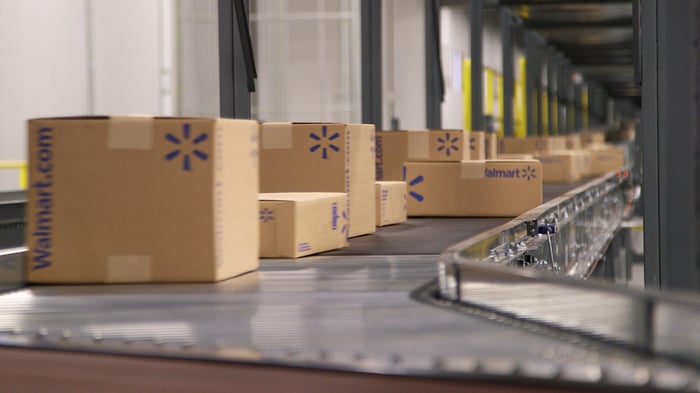 Wal-Mart's e-commerce spending is going off the charts

Wal-Mart made big headlines when it announced the acquisition of Jet.com for $3.3 billion last year. Few people paid attention to the streak of acquisitions Wal-Mart and Jet have made since then. Jet.com acquired Hayneedle just before the deal with Wal-Mart closed. Under Wal-Mart it acquired ShoeBuy, Moosejaw, and ModCloth.

What's more, Wal-Mart's head of e-commerce in the U.S., Marc Lore, said it's "a fair assumption" that Jet and Wal-Mart will pursue more of these types of acquisitions.

Wal-Mart is also investing in building out its own technology. It's creating a start-up incubator called Store No. 8 to build new technologies to enhance the customer experience both in stores and online. The company didn't disclose how much it plans to pour into the project.

Wal-Mart doesn't have an R&D expense on its income statement, but if it did, it'd surely be rocketing higher. Still, it has to compete with the $16 billion Amazon spent on technology and content last year. (Some of that spending goes to support Amazon Web Services, Amazon's cloud-computing division, as well as Prime Instant Video). Wal-Mart may have the resources to spend that much, but there's one big concern Wal-Mart investors should have.

Nobody can compete with Amazon

Amazon has a huge moat called Amazon Prime. Amazon likely has over 70 million Prime subscribers, and the first place they go when they want to buy something online is Amazon.com.

Wal-Mart tried to compete with Amazon Prime by offering its own shipping service -- ShippingPass. Earlier this year it ended the $49 per year program and started offering free two-day shipping to everyone for over 2 million items on its website (on orders $35 or more). That won't show up in R&D either, but it'll likely hit Wal-Mart's operating margin.

The bigger problem, though, is that Amazon is at the top of mind for consumers shopping online. More than half of online shoppers start their product search on Amazon.com. Wal-Mart can piece together a bunch of web properties with a few million in sales each, but it won't cut into Amazon's huge dedicated customer base.

So Wal-Mart may be spending heavily to grow its e-commerce through acquisitions and a new start-up incubator, but there's no indication that any of its efforts will produce results for the company -- especially considering the premiums it's paying for all these relatively small web stores.

Again, e-commerce is the main driving force behind retail growth in the U.S. If Wal-Mart's only means of growing its online sales is through expensive acquisitions, that should concern investors. That's especially true considering nobody has been capable of cutting into Amazon's lead.