Spirit Airlines (NYSE:SAVE), the largest ultra-low-cost carrier in the Americas, released three separate presentations during the month of March. In addition to a general investor update, the company shared its presentations from management appearances at two conferences. As you might expect, there's quite a bit of overlap among the three, with a handful of dominant themes emerging around the company's business model and competitive position -- all of which are encouraging for investors in Spirit today.

1. Operating margins of 15% or above should fuel steady earnings growth

While Spirit's industry-leading margins may not be sustainable at current levels -- 2016 adjusted operating margin was 20.9% -- management made clear that they are going to run the business to achieve "mid-teens or higher" operating margins regardless of economic conditions, the price of fuel or its competition. That's a bold statement, but as management also noted, this mid-teens operating margin goal hasn't changed since the company's IPO in 2011. 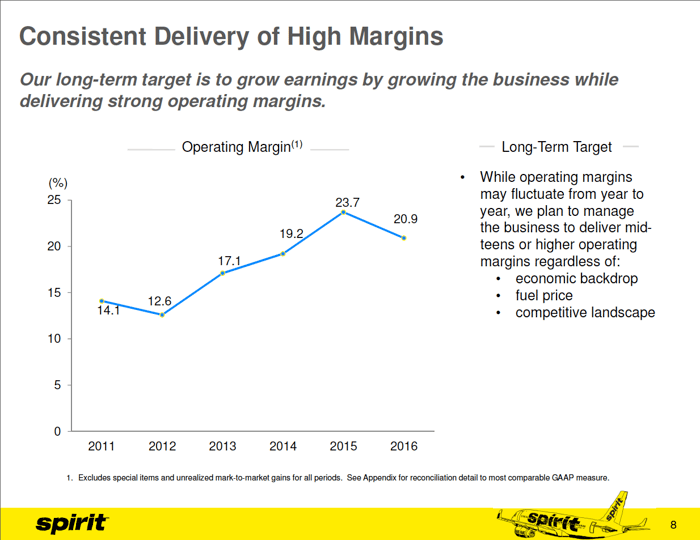 Spirit is also committed to growing the business by expanding its capacity, and is targeting 15% to 20% annual growth in available seat miles through 2021. This is a delicate balancing act, but it's comforting to know that Spirit won't be adding excess capacity for growth's sake at the expense of its operating margin targets. 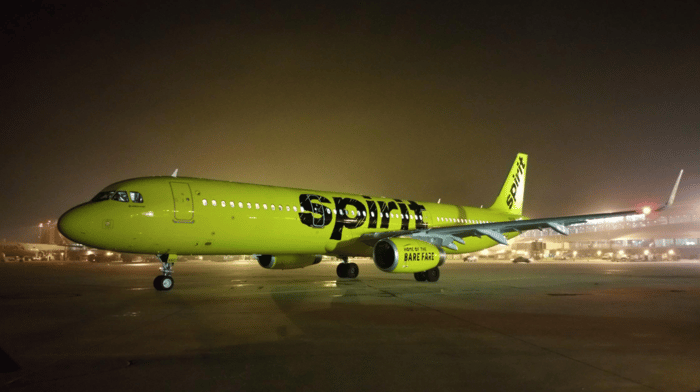 2. Spirit's cost advantage is expected to increase over the next five years

The key to Spirit achieving its operating margin goal is making sure the airline is the lowest-cost operator in the markets it serves. The company accomplishes this by being more efficient with its assets than any of its peers -- things like flying its planes more hours per day and putting more seats on its planes than its competitors do. 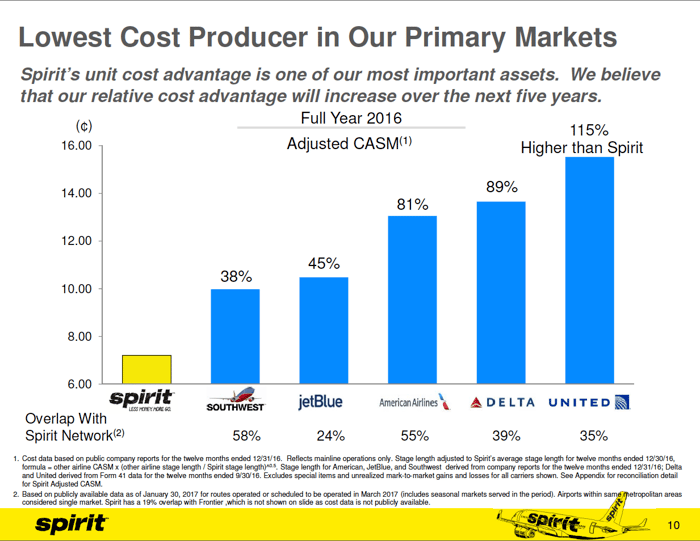 The exciting news for investors is that Spirit actually expects this gap to widen over the next five years as its relative cost advantage continues to increase. For 2017, Spirit is expecting its CASM excluding fuel to decline by up to 1%.

The company noted that over the last two years, its largest driver of TRASM (total revenue per available seat mile) decline has been weaker ticket revenue as a competitive pricing environment kept fares depressed. Encouragingly, non-ticket revenue -- which comes from things like baggage, itinerary changes, and advance seat selection -- has provided a much-needed source of stability during this period.

But the dark days of TRASM contraction appear to be nearing an end, with the pricing environment finally firming up a bit as the entire industry tries to lift unit revenues. Spirit is also reviewing the way it prices its tickets, opportunistically raising fares where feasible. As a result, the company, which is still guiding for a TRASM decline of 4% to 5% in the first quarter of 2017, expects to finally break through to positive TRASM growth in the second quarter.

4. Focused on closing its operational gap vs. other airlines

If you've been following Spirit for the last year or so, you already know that CEO Bob Fornaro's primary focus has been on improving the airline's performance as well as its customer perception.

And though Spirit still has a long way to go before it could be accused of having a good reputation among travelers, the company is already making good progress. Spirit lowered its rate of complaints to the Department of Transportation by more than 60% over the course of 2016, a huge improvement. Additionally, Spirit's on-time performance went from 17 percentage points behind the industry average in the first quarter of 2016 to just 1.5 points behind in the fourth quarter. 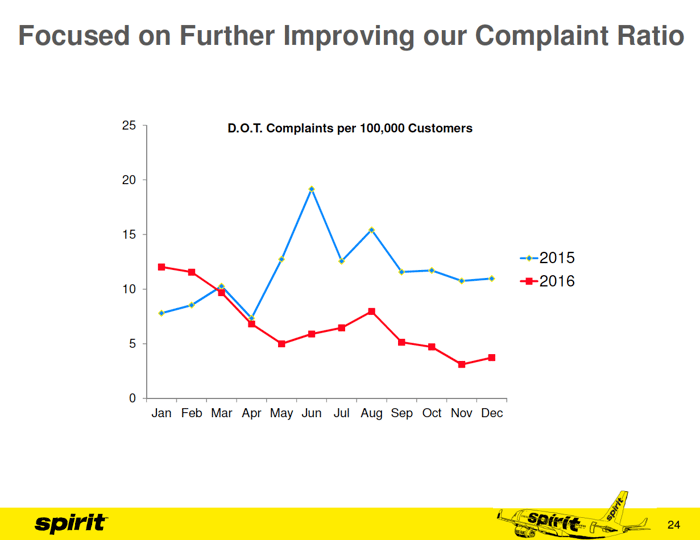 Fornaro remarked that the company views this as an 18-month process, and thinks that they are "on plan" to get there. He also pointed out that, despite naysayers who didn't believe Spirit could improve its experience without raising costs, "It's not happening -- our costs are right where we want them, and we're making big strides."

All in all, Spirit appears to be in a solid position heading into 2017. The company's combination of moderate capacity expansion and steady operating margins is an attractive formula for the kind of earnings growth all investors can appreciate. If the company's revenue and customer service strategies begin to pay off this year as well, Spirit's stock appears ready for takeoff.