Shares of FMC Corp (NYSE:FMC) leapt over 17% this morning after the company announced that it will pick up a significant portion of the crop protection business of DuPont (NYSE:DD) while selling its own health and nutrition division to the larger peer. Essentially, the two companies are swapping divisions, although FMC Corp will also make a $1.2 billion payment to DuPont. As of 12:21 p.m. EDT, the stock had settled to a 13.6% gain.

Why the deal? Well, earlier this week European regulators gave a conditional approval for a megamerger between DuPont and Dow Chemical (NYSE:DOW), but only if they divested significant parts of their crop protection businesses to alleviate concerns about a lack of competitiveness within the industry. The newly announced "swap" will be a win-win for all companies and investors involved. That's especially true for FMC Corp, which until now had a relatively modest crop protection business. 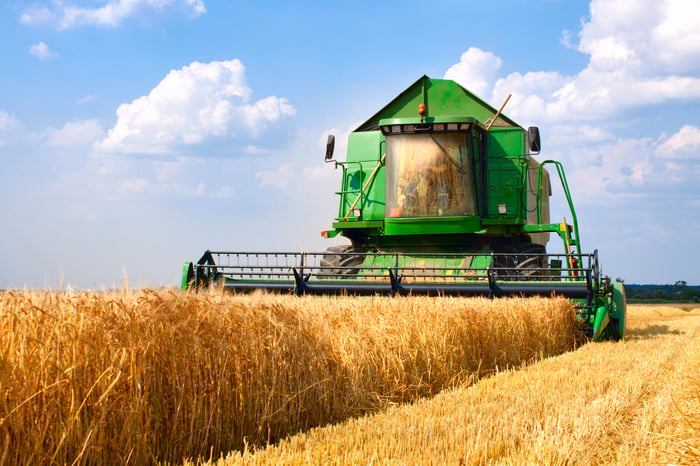 This may seem rushed, but for the last two years Dow Chemical and DuPont have been aware that divestments were likely needed to get their merger approved. Peers and competitors knew that, too, and many had a presence at regulatory hearings leading up to the preliminary decision announced earlier this week in the European Union. The world's leading chemical manufacturer BASF was considered to be the favorite to step in and make a last-minute deal, but FMC Corp beat it to the punch.

Purchasing most of DuPont's crop protection business -- heavily concentrated in insecticides -- will immediately make FMC Corp the fifth-largest crop protection specialist in the world ranked by annual sales, which are expected to be just shy of $4 billion. The assets in the acquisition alone are expected to contribute $1.5 billion in revenue and $475 million in EBITDA in 2017. That includes three of the world's leading insecticide products that generate over $1 billion in annual sales combined.

The long-term aspects of the deal are also attractive. The acquisition includes a significant portion of DuPont's crop protection R&D capabilities including a promising pipeline of 15 synthetic compounds, a library of over 1.8 million compounds that can be screened for commercial potential, 14 regional labs, an array of regulatory response capabilities, and hundreds of employees.

FMC Corp made a huge splash to become a top tier ag company overnight. Shareholders now have two major growth opportunities supporting their investment thesis: 1. a leading lithium production platform, and 2. a leading crop protection business. Given the immediate impact the acquisition will have on the company's business in 2017, investors may expect today's gains to have staying power.