Please ensure Javascript is enabled for purposes of website accessibility
Free Article Join Over 1 Million Premium Members And Get More In-Depth Stock Guidance and Research
By Reuben Gregg Brewer - Oct 13, 2019 at 10:18AM

Old versus new and diversified versus focused, those are the two things you need to think about when looking at ExxonMobil and Dow.

ExxonMobil ( XOM 0.56% ) is an old hand with a diversified business model. While the name Dow ( DOW ) is old, it's really a new company today, with a focus on the chemical space. Here's a few things you need to think about to decide which one of these iconic names is a better fit for your portfolio.

Most investors will be familiar with the names Exxon and Dow. However, just knowing a name isn't enough. Exxon has been one of the largest and most diversified energy companies in the world for a long time. Its business spans the upstream (drilling), midstream (pipeline), and downstream (refining and chemicals) spaces. This diversified approach to the energy sector is a hallmark of Exxon's, providing its business balance through the typical ups and downs of the oil market. 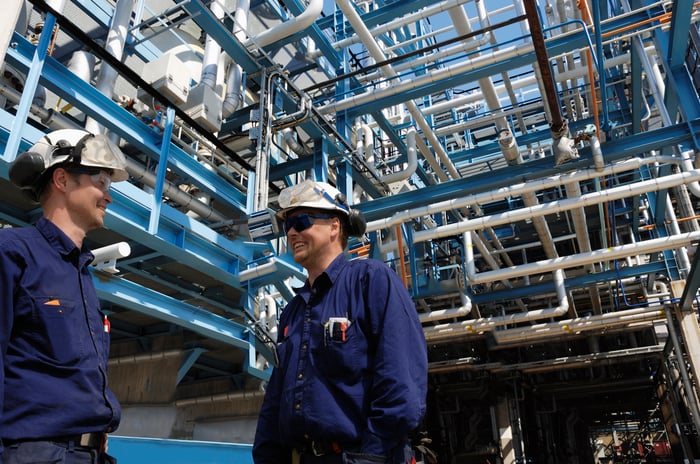 Dow is a focused chemicals company, but that's not the full story. This company is the end result of the megamerger of Dow and DuPont ( DD ) a couple of years ago. The goal from day one was to bring these two companies together, sort through the puzzle pieces, and break them up again into new focused businesses. In this case, the final outcome was three different entities: Corteva ( CTVA -0.51% ), DuPont, and Dow. Corteva is focused on agriculture, DuPont on "specialty materials", and Dow on more stable packaging and chemicals businesses. Dow, then, is basically a focused downstream business.

2. Here and now, and a bit of the future

Exxon has been struggling through a notable industry malaise. Oil prices are kind of low (and, as always, very volatile), and margins in the company's downstream businesses are weak. Financial results haven't been great, but have held up reasonably well given the circumstances. That said, the company is working on a long-term plan to increase production, which had been falling for a few years, and increase returns. Early indications are that it's achieving some success on both fronts. There's still a long way to go, however, since the plan runs through 2025, and involves spending up to $35 billion a year on capital projects. That said, the giant energy company has a long history of solid execution, so there's no reason to doubt it can boost its production and returns as it executes its plan.

Dow is, effectively, a new company, but it is really a collection of old businesses. Although the breakup was the big story of the merger between Dow and DuPont, the second big goal was streamlining and cost cutting. For example, Dow today is focused on six businesses, down from 15 before the merger and breakup. It has 30% fewer employees as well, and capital spending needs are lower too. And management is targeting another $1 billion in cost savings before it's through. As it works on these restructuring efforts, Dow is also attempting to grow its business, which is where its roughly $2.8 billion in annual capital spending plans comes in. When you sum it up, however, the newly stand-alone Dow is still something of a work in progress, and there's really no track record to review.

3. A quick look at the foundation

There's no reason to believe that Exxon or Dow can't execute on their current plans. That said, Exxon comes with a much stronger balance sheet. For example, long-term debt makes up less than 10% of the oil giant's capital structure. At Dow that figure is around 50%. To be fair, Dow's business should be more stable over time, allowing it to handle a higher debt load. Exxon's low level of debt is largely there to provide it the leeway to keep investing and paying shareholder dividends through the ups and downs of the oil sector. That said, Exxon does appear to have a stronger financial foundation today.

4. What about the yield?

The big draw for both of these companies is likely to be their elevated yields. Exxon's dividend yield is around 5.1% today, toward the high end of its historical range. Dow's yield is roughly 6%, which is high on an absolute basis, but there's no real history to which one can compare that number. Exxon, meanwhile, has increased its dividend for 37 consecutive years, a record that none of its closest peers can match. Dow's dividend release highlights that it has paid dividends since 1912, but it's really starting from scratch again following the merger and breakup.

That said, investors often look at payout ratios to assess the strength of a company's dividend-paying ability. That's not a great metric for Exxon, since oil prices can lead to wild earnings swings. To some extent, investors are relying on the company's historical commitment here, backed by an incredibly strong balance sheet. Dow's payout ratio is targeted at around 45%, though it hasn't been public a year yet, so it's had to give an accurate number for where it is right now. One of management's stated goals is to grow the dividend over time.

Exxon is working through a difficult period for oil prices and spending heavily to improve its business. It has a rock-solid balance sheet and looks relatively cheap from a historical basis (the yield is higher than it has been in decades). It is hardly risk-free, but it has a long history of success behind it. Even conservative investors would be OK jumping aboard here.

Dow has a great name and solid businesses, but is really a new company today with a very limited history. Its balance sheet isn't as strong as Exxon's, but it also isn't likely to face the same top- and bottom-line swings. That also suggests its target payout ratio is reasonable. However, with little track record, most investors would probably be better off giving the company at least a year or so to get its house in order before jumping on this high-yield stock.

That said, dividend-focused investors shouldn't write it off. Keep Dow on your watch list and assess the company's business performance over the next few quarters to see how well management lives up to its promises. It might be worth buying once there's a bit of a track record to go on.