Investing in ExxonMobil (NYSE:XOM) has been an extremely frustrating endeavor over the past few years. Management's plans to grow earnings could make your mouth water, but tepid earnings results were enough to give anyone a headache.

This past quarter, though, the company's results started to show the slightest hints of how this growth plan will affect the bottom line. The company also gave the green light to several of its key needle-moving development projects that will get it one step closer to achieving those ambitious goals.

Let's look at Exxon's most recent earnings results and see why investors should be pleased with the progress management has made thus far.

Considering oil prices dropped 40% over the course of the fourth quarter to less than $50 a barrel, these results don't look as bad as one might have assumed. One thing that was working in ExxonMobil's favor was higher natural gas prices. As big oil peer Royal Dutch Shell reported earlier this week, natural gas price realizations were some of the highest we've seen in years. That, plus one-time gains for the sale of its refinery and associated assets in Italy, as well as its retail network in Germany, helped to push refining earnings higher. 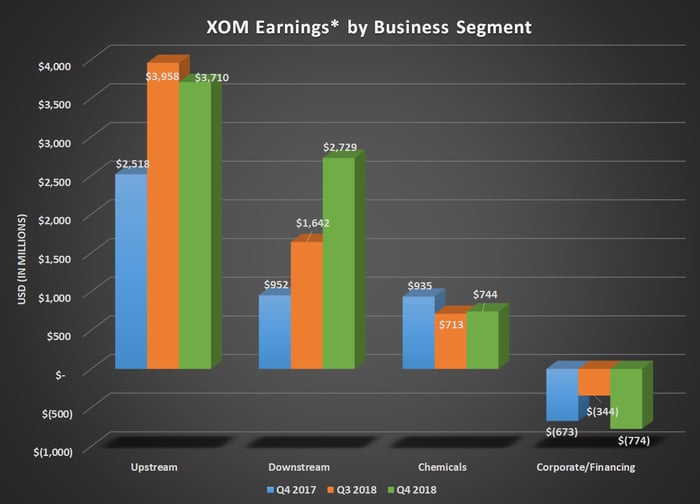 For the most part, Exxon's management didn't give a whole lot of details about its plans, beyond what it had already presented at last year's security analyst and investor day meetings. Since its next meeting is in March, it's probably leaving the good stuff until then. When asked about its capital spending levels for 2019, though, CEO Darren Woods hinted that it will continue to emphasize its projects in the Permian Basin and offshore Guyana:

Going into 2019 we expect to be around 30 billion, and that does reflect the progress and the opportunities that we're seeing in Guyana, the upside that we've seen there as well as the Permian. We just talked a little bit about the Permian, because I think one of the things we're challenging ourselves with and looking at the unconventional resources is what value, what unique value can ExxonMobil bring to this resource play? And so we have spent the year really making sure that we understand the play that we've got, doing some delineation but at the same time leveraging the full capability of ExxonMobil to bring scale and scale development along with technology -- additional technology and research into the Permian. So I think what you'll hear in March is a good overview around how ExxonMobil is uniquely coming into the unconventional resources to make this a low-cost, long-term successful development play. 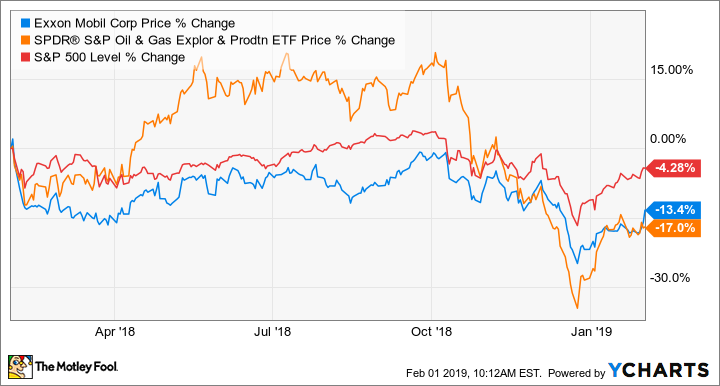 ExxonMobil's plan is starting to show up in its results

ExxonMobil has been lambasted in recent years because of its declining production and because its rates of return are no longer the cream of the crop among its integrated oil and gas peers. The plan it put out last year was promising some ambitious targets for earnings, but it involved spending lots of money at a time when others were focusing on more disciplined spending and share buybacks.

This quarter showed some of the early signs that this plan will work. Total production was up only slightly from last year, but liquids production was up 7% and more than offset deliberate decisions to divest some assets and not invest in maintaining less profitable U.S. gas production. More importantly, these new production sources are profitable at much lower prices.

With several new green-lighted projects in all three business segments, investors should expect higher capital spending in 2019, which are likely to lead to lower free cash flow. As these projects come to fruition, though, they should deliver significant bottom-line results and make it worth investors while to stick around.