After last quarter's earnings report, there was some concern that ExxonMobil (NYSE:XOM) was just spinning its wheels and didn't have a coherent plan to grow the business in this low oil price environment. At the time, management was shorter on details than usual -- which is saying something, because ExxonMobil is typically a pretty tight-lipped organization. It appears, though, that it was waiting until its most recent analyst meeting to provide investors with details about its plans for the future.

Based on the things management highlighted in this presentation, the next half-decade is likely going to be a big one for ExxonMobil. Here are five takeaways from the company's analyst meeting that should give investors an idea of what's coming down the pipe. 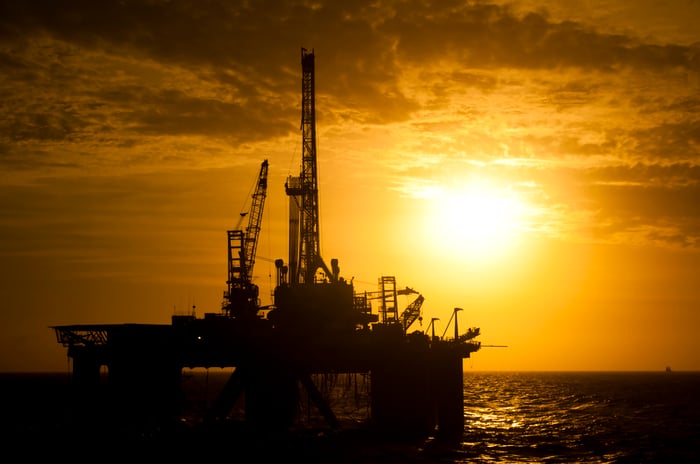 Historically, ExxonMobil has been the one company in the industry that invests in the business through thick and thin. It has been a significant reason the company has maintained higher rates of return than its peers for decades. During this most recent oil downturn, though, management uncharacteristically elected to lower capital spending as it completed projects to preserve its balance sheet and dividend payments as much as possible.

It appears that this flirtation with belt-tightening will come to an end, though, as management plans to ratchet up its capital budget over the next few years. 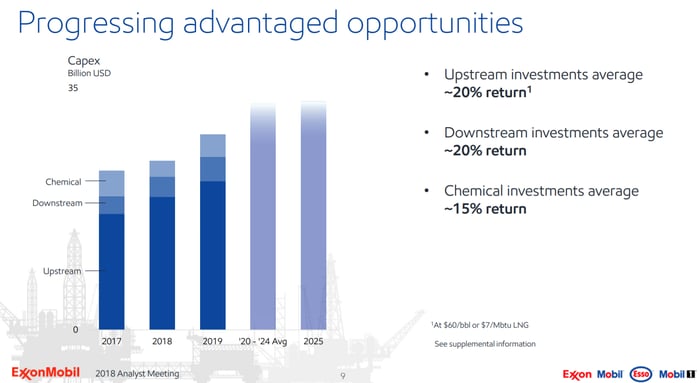 With oil prices where they are today, the idea of Exxon increasing its capital spending plan to around $35 billion annually by 2020 sounds a little frightening. Looking at the oil and gas industry, though, it appears to be a bet that we could be headed for a bit of a supply crunch in a few years.

Exxon, its peers, and just about every other producer out there concentrated spending on either maintaining existing production levels or trying to squeeze a little more out of existing assets from 2015-2017. The trade-off for that is a much sharper drop off in production later on and a shorter reservoir life. With those existing assets now likely on shorter time windows and a general lack of investment in new production sources, there is a good chance that oil supply could be tight by the end of the decade, so Exxon wants to ramp up spending now to capture that market when it comes.

You were scared about lack of production growth?

The largest knock on ExxonMobil recently has been a complete lack of production growth in recent years. While it has brought on a few new production sources, it hasn't been nearly enough to offset the declines across the rest of the portfolio.

With this new capital spending plan, though, Exxon expects to deliver 25 new major projects and increase its production of shale oil in the Permian Basin by five fold. Combined, these should grow net production by an additional 1 million barrels of oil equivalent per day. That puts Exxon's production growth plans on the high end of its peers, which is a major turnaround from just a few months ago, when its production plans looked meager by comparison.

Can grow in a low price environment

Increasing capital spending and production by such large amounts sounds great, but there is probably a small voice in the back of your head saying, "what if oil prices fall again?"

It's a legitimate concern, and that's probably why management added this slide to its presentation. 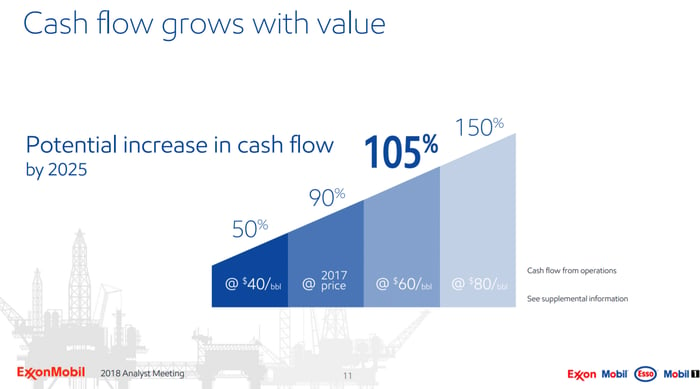 That is pretty astounding if you step back and think about it for a second. Management estimates that it can grow cash flow from operations by 50% compared to 2017 if oil prices were to remain around $40 a barrel.

A refocus on downstream investment

Reading that, the first thing that comes to mind is "that's absurd." We saw what happened when oil went to $40 a barrel, and Exxon's cash from operations dried up fast. One of the ways management wants address this is to put a greater emphasis on investing in its downstream and chemical production capabilities.

Current CEO Darren Woods' predecessors -- Lee Raymond and Rex Tillerson -- both came from the upstream production side of the business. So, it should come as no surprise that much of the emphasis during that time was on growing production and backfilling its reserves with discoveries. Woods, on the other hand, is a downstream guy, and it's clear that he wants to round out the company's integrated model.

Between now and 2025, the company will start up operations at 13 new chemical production facilities worldwide -- seven of which should start up by the end of 2018. Much of that investment is going to the U.S. Gulf Coast region because of cheap feedstock costs. On top of that, the company is mulling an expansion of its Beaumont, Texas, refinery that would be the largest increase in U.S. refining capacity in decades.

By expanding its presence in refining, lubricants, and petrochemical manufacturing, ExxonMobil is helping to insulate some of its future cash flows from the ups and downs of oil prices. These businesses typically do well when production is struggling. It also helps that much of those new downstream assets will be located in a place where it can use its production from the Permian Basin, which should allow the company to extract more value out of each molecule.

We're going to get back on top 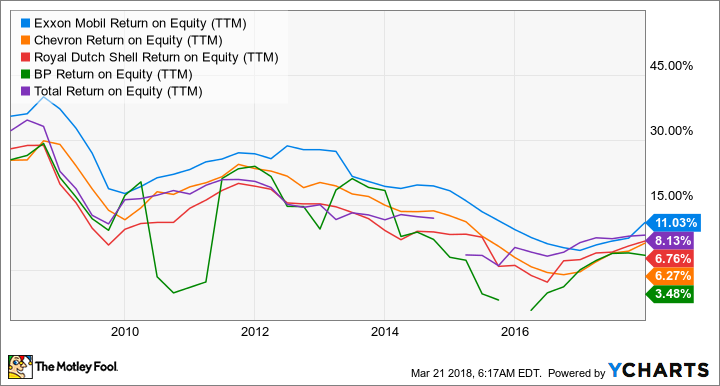 In a rather surprising turn of events, ExxonMobil temporarily lost its crown as the integrated oil and gas company with the highest return on equity in 2017. With this spending plan, though, management intends to not only recapture that title, but also put a lot of breathing room between it and the competition.

According to management, it will be able to achieve an average return on capital employed of 15% by 2025 with oil remaining around $60 a barrel, with considerable upside if we were to see an uptick in prices. If we do see a rise in prices, as the company's upstream spending plan suggests, then Exxon could produce some rather incredible returns over the next decade.

There is a lot to like in Exxon's strategic plan. While all investors will like growth in production and increasing rates of return, it's also encouraging to see that many of its spending plans seem relatively safe. Unlike the prior wave of investment that involved several mega projects in remote parts of the world, a lot of these investments are in more known quantities, which makes for a safer bet. The riskiest projects in this plan are for its offshore Guyana project and a massive LNG export terminal in Mozambique. If there was one critique of this plan, it's that the company still seems to be underinvesting in alternatives to its existing business that may be needed further down the road.

If investors were at all concerned about Exxon's future as an investment over the next few years, though, this plan should put those concerns to bed.