Please ensure Javascript is enabled for purposes of website accessibility
Log In Help Join The Motley Fool
Free Article Join Over 1 Million Premium Members And Get More In-Depth Stock Guidance and Research
By Jeremy Bowman - Mar 31, 2017 at 11:36AM

Shares of the embattled retailer hit a new modern low. Is it a buying opportunity a warning sign?

Shares are down more than 25% this year as worries about the department store industry and Penney's lack of comparable sales growth have mounted. The retailer and its peers, including Macy's, Kohl's, and Nordstrom, all reported tumbling sales at established stores  over the key holiday quarter. Penney also jolted the market with news that it would close 130-140 stores in order to concentrate its investments on the strongest part of its base and drive further profit growth. 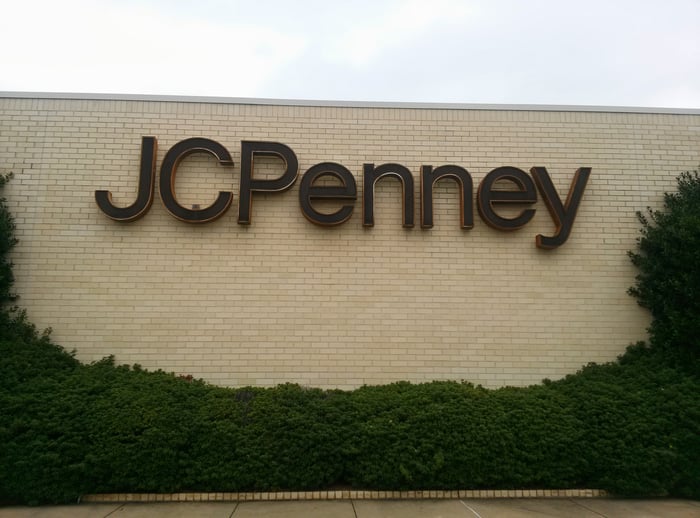 With the recent sell-off, investors may be wondering if they should buy the dip. Let's take a closer look at the key factors driving J.C. Penney stock today to answer that question.

The outlook for the department store sector is not good. The traditional retail powerhouses are seeing sales slide, and many have been forced to shutter stores. Shopping habits have changed. With the advent of e-commerce and the rise of Amazon, consumers are increasingly staying home and ordering desired products on their phones or PC's, avoiding the trip to the local mall altogether. As a result, mall traffic has dropped, forcing scores of malls nation-wide to close and a number of mall-based retailers like The Limited, Aeropostale, and American Apparel to declare bankruptcy. Through the first two months of the year, department store sales have slumped 7.3%, according to the Census Bureau.

Given those trends, the future for J.C. Penney and its peers looks grim. Though the vast majority of retail sales still take place in physical stores, retail margins are thin and small changes in market share have big effects on the bottom line. Online sales are growing much faster, and that trend should continue as technology improves and delivery becomes faster and easier. Brick-and-mortar retailers can hardly afford to continue losing sales to online competitors.

That shift means the status for department stores like J.C. Penney in another 10 or 20 years is uncertain, but the current picture for investors is clearer.

Despite the headwinds in the industry, J.C. Penney is on the upswing in some ways. Last year, the company reported its first annual profit since 2011 as adjusted earnings came in at $0.08 per share. It should also be pointed out that management expects that figure to improve to $0.40-$0.65 this year. Such a result would potentially bring the stock's P/E to single digits as it cuts costs and improves efficiency. That kind of valuation would certainly add to any bull thesis for the stock.

However, recent top-line performance has been wanting. Management predicted comparable-sales growth of 3%-4% last year, but instead the figure was flat. Missing expectations on such an important retail-industry figure can often be a red flag for investors, especially in an otherwise strong economy. Despite slower-than-anticipated growth, however, the company still met its bottom-line targets, a credit to their execution. For the current year, management's guidance is more muted, calling for another 12-months of flat comparable sales.

To combat the situation, CEO Marvin Ellison has been aggressively shifting operations and floor space toward faster-growing retail segments like home improvement and appliances as apparel sales have lagged. Initiatives like that, and partnering with big-name brands like Nike, are smart, but they have not been enough to drive sales higher.

J.C. Penney shares will remain volatile as the battleground stock is especially sensitive to any industry or company-specific news. Shares ran up as much as 9% on March 29 as plans for a border tax seemed to go out the window -- a win for retailers.

The key question for J.C. Penney investors at this point is whether the company can meet its own guidance for the year. If the retailer can drive earnings per share above $0.40 and keep comparable sales at least even, which should be easier with 130-140 stores being shuttered, shares very well finally earn a boost of investors. However, if comparable sales pull back, it would likely serve as further proof that the company, along with the rest of the industry, may be entering a secular decline that would push the share price further south.

Unlike its peers, Penney does not have profits or dividends to court investors with, nor does it have the valuable real estate portfolio of Macy's. Investors are essentially hanging on the turnaround effort, and if it continues to languish, the stock will surely take a hit.

However, if Ellison can deliver, its not hard to imagine shares returning to previous trading levels as the long-awaited JCP turnaround becomes a reality.