There are many companies looking to ride Apple's coattails to continued success in the years ahead -- here are three that look good now.

Strong earnings growth and the dominance of the iPhone, which more than 700 million consumers use worldwide, have combined to help Apple (AAPL 1.62%) stock rise more than 900% in the past decade. Apple is the largest company to trade on any U.S. stock exchange by market cap, and it has by far the most cash of any public company. It's using that cash pile to make huge investments in research and development.

But we're not going to talk here about Apple. I want to focus instead on what companies have been benefiting from Apple's success as they help supply the parts and services necessary for Apple's continued growth. Here, then, are three key Apple suppliers that could also make top stocks for 2017. 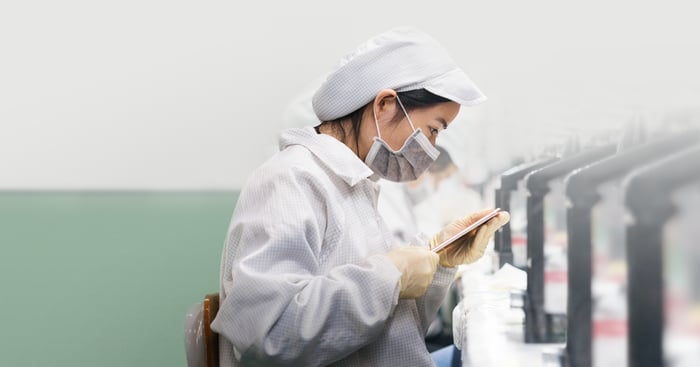 Micron Technology (MU -2.95%) is a semiconductor manufacturer that makes products for computers, consumer electronics, the automotive industry, industrial applications, and more. The company supplies the internal processing power of iPhones and other Apple products. Micron's stock was a great performer in 2016, gaining more than 50% during the year, and looks on track to continue gaining in 2017.

Micron's NAND products, which are advanced rewritable memory devices, seem to have huge potential as cloud computing continues to grow, which could help to diversify and grow sales in the coming quarters. In its most recent quarter, Micron's sales rose 58% year over year.

The company does face some risks, including an increasing threat from major players in the field, including Intel. It also faces volatility in the prices for its products, the same thing that's sent the stock tumbling in the past. In addition, Micron's CEO recently announced his retirement, and so far a replacement hasn't been named.

It should also be noted that Micron stock is still off its November 2014 high, which was followed by more than a 70% drop over the next 18 months. Still, analysts expect Micron's earnings to continue growing quickly, and the stock price looks attractive at less than 6 times forward earnings estimates.

Texas Instruments (TXN -3.33%) is an advanced semiconductor maker that makes chips and processors, including various components of Apple's iPhone and iPad. The company recently got a major operational boost when it moved to a new type of chip for one of its main products that reduced production costs significantly -- as much as 40%.

For the full year of 2016, sales rose only about 3%, but earnings per share grew nearly 24%. The company showed strong momentum within its auto and industrial segments, two areas the company has been investing heavily in, and which seems to be paying off now. Sales are climbing faster now than they did in 2016, and management has guided for Q1 sales of as much as $3.43 billion, compared with $3 billion during the prior-year period.

As for the stock's valuation, it looks relatively cheap in its industry, trading at just 23 times earnings. It also comes with a nice 2.5% yield that's grown very consistently over the past decade and is likely to continue growing, as the company has a payout ratio of less than 50% and strong cash flow. 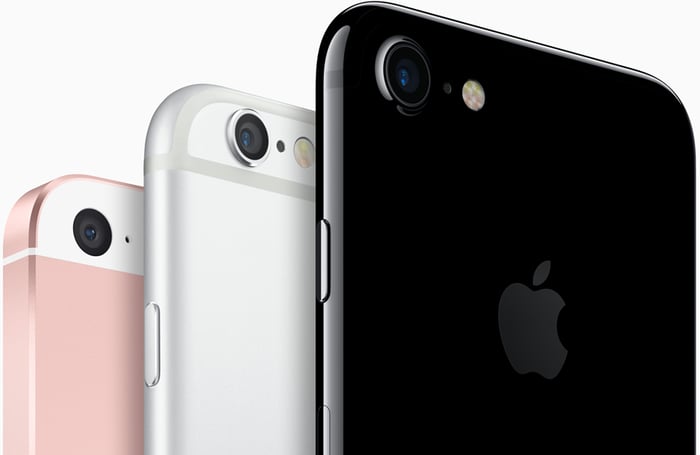 The progression of iPhone generations. The iPhone 8 is expected in fall 2017. Image source: Apple.

Last, but certainly not least, is Broadcom (AVGO -1.64%), which, following the 2016 merger with fellow semiconductor behemoth Avago, is a $94 billion company by market cap. Broadcom is a major supplier of wireless chips used in the iPhone, and there's been speculation lately that Broadcom and Apple are working together on wireless-charging technology that could be in the iPhone 8, expected to be released later this year. That would be a major positive development for both companies.

Thanks to the merger, Broadcom's 2017 sales are likely to grow substantially from last year, but expect that growth to continue as the company expands its market share. The company's long-term earnings growth potential looks even better, as it's expected to grow around 15% annually over the next five years. While the stock looks expensive because of the cost of the acquisition, it's trading at just 14 times forward earnings estimates, and it also pays a 2% dividend yield.

Is it a good idea to invest in companies that might ride Apple's coattails, or is it better to just invest in Apple itself? That's a fair question, as Apple already looks like one of the best stocks to own in 2017, and betting on its suppliers has been a gamble in years past. Apple has a history of squeezing suppliers on prices to protect its own margin, while new entrants in the chip space have left some companies with questionable growth prospects. However, each of the companies we've looked at have many more buyers than just Apple, and each also has its own unique growth prospects.

Therefore, it wouldn't be a bad strategy to consider both Apple and these suppliers as good stocks to own going forward.

These 3 Nasdaq Stocks Are a Steal Today