The logic is simple. More Americans are aging. As people get older, over time many need help in day-to-day living but not the level of care provided by a nursing home. Because of these two facts, the assisted living market appears likely to grow significantly in the future.

As simple as that sounds, finding solid assisted living stocks to invest in isn't easy. Three assisted living stocks, however, could be good picks in 2017: Brookdale Senior Living (BKD 2.08%), The Ensign Group (ENSG 2.01%), and Welltower (WELL 1.80%). Here's what makes these stocks stand out. 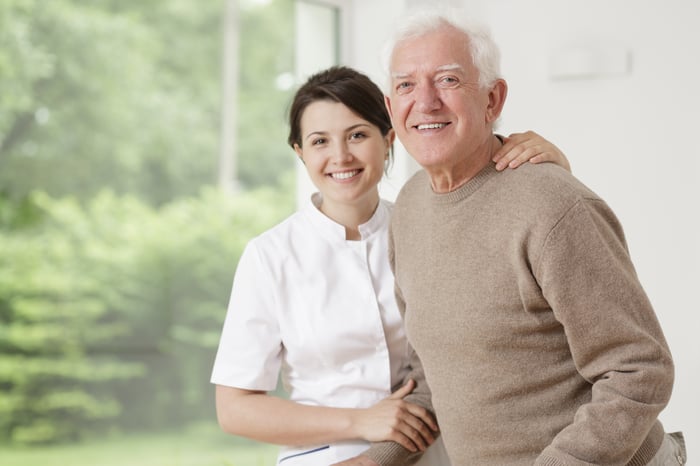 The company faces several challenges of which investors should be aware. Brookdale has incurred net losses in each of the last five years because of high operating costs. Last year, the company faced new competition in several of the markets in which it operates. As a result, occupancy rates were below expectations.

However, the long-term future for Brookdale appears to be positive. Wall Street analysts project average annual earnings growth of nearly 10% over the next five years. Its size gives Brookdale several competitive advantages, including operating efficiencies, that smaller rivals can't match. As the inevitable demographic trends play out in the U.S., Brookdale Senior Living should benefit.

The Ensign Group: Profitable and growing

While Ensign isn't as big in assisted living as Brookdale is, the company has one significant advantage over the larger rival: It's making money. Ensign has been profitable in each of the last five years. The company has also more than doubled its revenue since 2012 thanks in part to several strategic acquisitions.

Analysts project The Ensign Group should increase its earnings by an average of 15% annually over the next five years. While it remains to be seen how much of that growth will stem from assisted living, Ensign could become a bigger player in the market if it chooses to do so.

There's one big reason for investors to like Welltower: its dividend. As a REIT, the company is legally required to return at least 90% of its taxable income to shareholders through dividends. Welltower's dividend currently yields 4.9%. Its yield has been above 4.5% for most of the last decade.

Welltower has also provided modest growth in the past and should continue to do so. Future growth could be boosted by steps the company began taking in late 2016 to reposition its portfolio to focus primarily on more-profitable private-pay properties.

For income-seeking investors, Welltower is the obvious choice among these three assisted living stocks. If you're looking for the stock with the best shot at producing gains, though, I'd go with Brookdale.

Why not Ensign? While Wall Street thinks Ensign's earnings growth will be higher, Brookdale is significantly cheaper right now. This lower valuation combined with opportunity for decent growth makes Brookdale Senior Living an assisted living stock to check out.