Please ensure Javascript is enabled for purposes of website accessibility
Log In Help Join The Motley Fool
Free Article Join Over 1 Million Premium Members And Get More In-Depth Stock Guidance and Research
By Travis Hoium - Apr 1, 2017 at 8:07AM

MGM has managed to grow its asset base while reducing debt in the last few years, which is no small feat in the gaming industry.

It wasn't long ago that MGM Resorts (MGM 3.63%) was struggling to survive during the financial crisis. Put simply, the company's debt had become too much to handle and assets like Treasure Island had to be sold off in a rush. All of this occurred as the economy was in an absolute tailspin.

But MGM's performance since the early 2010s has been incredibly stable and it has made some moves that shore up the balance sheet while also allowing for growth. Here's a look at how MGM became a more stable and faster growing company in the last few years. 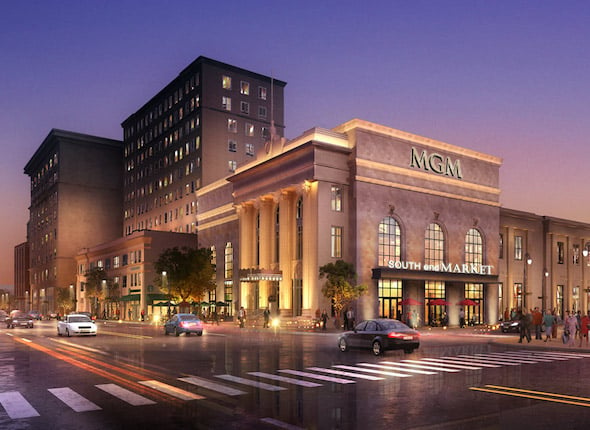 When MGM Growth Partners (MGP) was launched last spring it infused $1.2 billion into its parent company and the sale of Crystals at CityCenter netted the company a $540 million dividend from the joint venture. On top of that, $3.7 billion of debt was moved to MGM Growth Partners, which carries its own debt for the properties it owns.

While the cash infusion and release of debt was a positive, it didn't really show up on the balance sheet. You can see below that debt actually rose slightly in 2016 and that's because MGM Growth Partners -- despite being a separate company -- is still consolidated onto MGM's balance sheet so its debt appears there as well. And the money that was brought in was used to fund growth. 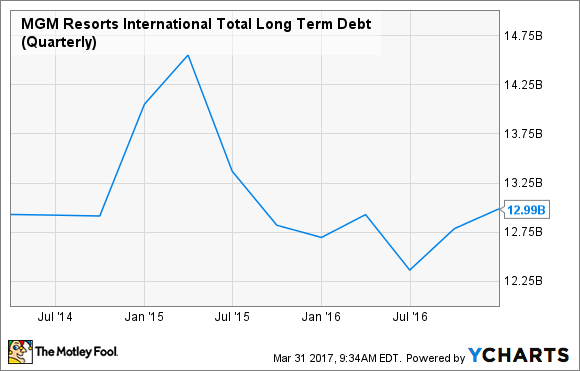 The growth side of MGM

What MGM built, acquired, and had under construction during 2016 may be just as consequential as its moves on the balance sheet. MGM National Harbor near Washington, D.C. opened in December and the acquisition of the half of Borgata it didn't already own was completed in August. Both properties will give MGM more east coast exposure, which may or may not be a good thing.

The biggest impact may come in Macau, where MGM Cotai is currently under construction. Expected to open later this year, the property could double the $520.7 million in EBITDA generated in 2016. And this will be the company's first foray into the Cotai region that's been extremely lucrative to Las Vegas Sands (LVS 5.03%) and Melco Crown (MLCO 4.70%).

Macau is now beginning to grow again as well, which helps all gaming operators there. Gaming revenue is up year over year in each of the last seven months and interest in Cotai's new resorts will help draw even more customers from China and around the world. MGM Cotai should be able to benefit greatly from this growth wave.

MGM setting itself up for a bright future

One of MGM's challenges has always been that it's been highly indebted because it built out new resorts and bought up rival gaming companies. Now, the company is starting to de-leverage its balance sheet and focus on growth that has a high probability of being successful.

This de-leveraging could also be coming at an important time as the company looks at potentially winning a gaming license in Japan. As one of the biggest gaming companies in the world, MGM has a good shot in Japan and that would take MGM from being a solid investment in the gaming industry to one of the best investments in the entire hospitality industry.