Please ensure Javascript is enabled for purposes of website accessibility
Log In Help Join The Motley Fool
Free Article Join Over 1 Million Premium Members And Get More In-Depth Stock Guidance and Research
By Travis Hoium - Apr 1, 2017 at 10:41AM

The $1.9 billion stadium for the Las Vegas Raiders will be paid for, in part, by visitors to Las Vegas, and the benefit to casinos may not be worth the cost.

Las Vegas is officially getting an NFL team. The Oakland Raiders' move to Las Vegas was approved by NFL owners on Monday, and the relocation will take place after the 2017 season. In 2020, the new stadium across the interstate from the south end of the Las Vegas Strip will open, and hundreds of thousands of visitors each year will come to the stadium to watch football and other events.

We don't know for sure what the impact on Las Vegas' casinos will be, but it might not be what you think. In fact, the stadium's $750 million bill for the Las Vegas Strip and surrounding area are already impacting the gaming industry. 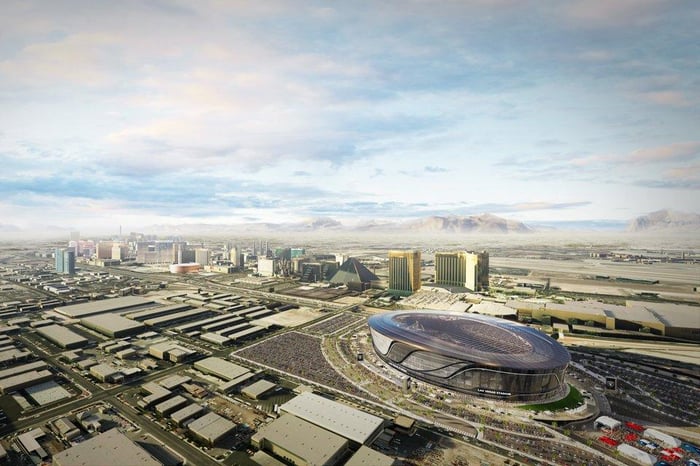 Las Vegas casinos are (indirectly) paying for the Raiders stadium

The first effect, which has already hit Las Vegas Strip resorts, is the 0.88% room tax that went into effect on March 1. This money will be used to fund the $750 million public portion of the stadium financing. The impact may seem small, but that money is lost potential revenue for resorts in Las Vegas. We don't know the direct impact, but a large chunk of the $750 million in taxes could theoretically have instead been spent at Las Vegas resorts.

As a result of the tax, MGM Resorts (MGM 11.30%), Caesars Entertainment (CZR), Las Vegas Sands (LVS 5.86%), and Wynn Resorts (WYNN 12.05%) customers will be the ones really funding a large portion of the $1.9 billion project. And it's not clear that customers or gaming companies will get much of a return on that investment.

The NFL's impact on Las Vegas

Resorts are looking for the NFL to bring more people to the city who will spend money on more than just football tickets. But the impact may not be very big. The 65,000-seat stadium will bring 520,000 people to home games each year -- but the Raiders are hoping most of those people won't be coming from out of town. And therein lies the tension of bringing the Raiders to Las Vegas.

Another challenge with translating the stadium into new gaming revenue is its location. It's across the interstate from Luxor and Mandalay Bay, which are on the far south end of the Strip. Stadium-goers will need to either drive or take a long walk to get to the casinos; this isn't like a fight at MGM where you walk out of the stadium and into a casino. It'll take a lot of effort to turn football into new revenue for Strip casinos.

Other stadiums have a bigger payoff

The 520,000 people visiting the stadium for eight home games also pales in comparison to potential attendance at other types of stadiums already in Las Vegas.  An NHL team with a 20,000-seat stadium can have 820,000 visitors annually. And when the Las Vegas Golden Knights start playing at T-Mobile Arena behind New York-New York, that's how many visitors it could see annually, plus the visitors to dozens of other concerts and events that will take place at the stadium.

Even in Las Vegas, only a handful of events can attract 65,000 spectators to a stadium. Most of the time the stadium will be empty, and even when it's full, there's not likely to be a meaningful impact on the Strip. With every customer in Las Vegas hotels paying for the Raiders to come to town, it's tough to see how the team will have a positive impact on Las Vegas resorts, and at worst the gaming industry may be giving up as much as $750 million in future revenue from the taxes to pay for the stadium.