Shares of cloud storage provider Box (NYSE:BOX) rallied 35% over the past 12 months, but the stock hovers just 18% above its IPO price of $14. That's because after hitting $23 on its first trading day in Jan. 2015, Box plunged below $10 last February before gradually recovering to the mid-teens.

Despite that lackluster performance, Drexel Hamilton analyst Brian White recently reiterated his "Buy" rating on the stock and his price target of $26 -- which represents a near-60% rally from its current price. White claims that Box looks cheap with an EV/Sales ratio of 3.3 based on its calendar 2018 (fiscal 2019) expectations. Is that "low" valuation enough to justify buying Box, or should investors ignore this overlooked cloud stock? 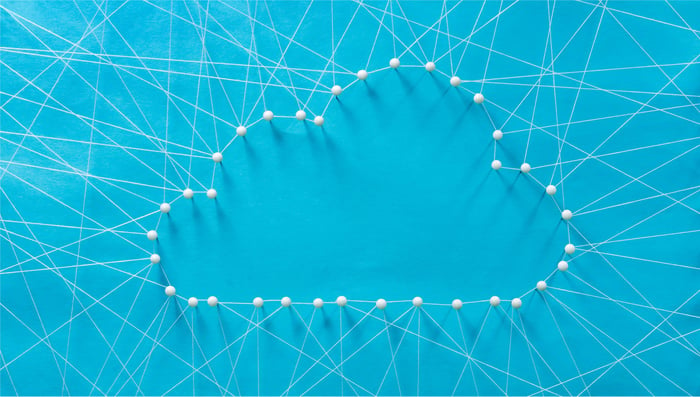 What are Box's key strengths?

Box provides cloud storage and associated services to over 71,000 businesses, including the majority of the Fortune 500 companies. Its major customers include industrial behemoth General Electric and pharmaceutical giant AstraZeneca. That market presence is impressive, since the cloud storage market is filled with bigger players like Amazon (NASDAQ: AMZN), Microsoft (NASDAQ: MSFT), and Alphabet (NASDAQ: GOOGL) (NASDAQ: GOOG) 's Google.

Despite those challenges, Box has posted double-digit sales growth ever since its IPO. Its revenue rose 32% to $398.6 million in fiscal 2017, and it expects another 25%-26% growth this year. Much of that growth comes from the addition of new customers, the introduction of add-on cloud services (like security and analytics) which boost its revenue per customer, and integration partnerships with companies like Microsoft, Salesforce, and IBM. Deferred revenue, a key indicator of forward demand, rose 30% to $242 million at the end of fiscal 2017.

What are Box's key weaknesses?

Wall Street expects Box to report non-GAAP losses this year and next year -- although those losses are expected to continue narrowing. Box faces a dilemma which many cloud SaaS (software as a service) companies face -- competition keeps price expectations low, but the cost of securing new customers and developing new services remains high. We can clearly see that impact in its operating margins: 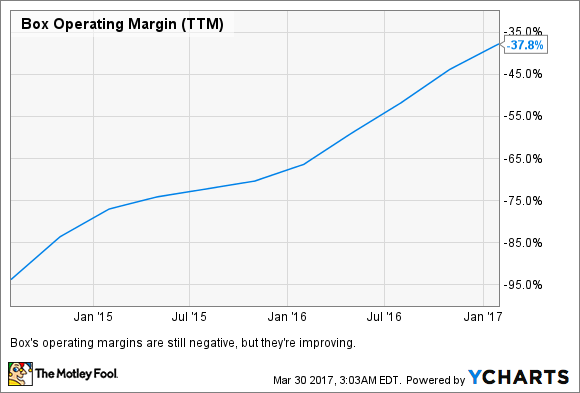 The ongoing cloud storage pricing war between Amazon, Microsoft, and Google limits Box's ability to raise prices. However, all three companies can afford to use cloud storage services as a loss leader to expand their ecosystems. Box has neither the scale nor ecosystem to follow suit -- so it could eventually lose customers to those tech giants' bundling strategies.

Box finished 2017 with a negative free cash flow (FCF) of $24.8 million. That marked a big improvement from its negative FCF of $116.3 million in 2016, and Box achieved its first quarter of positive free cash flow ($10.2 million) during the fourth quarter. However, Box isn't expected to achieve a full-year positive FCF anytime soon, and a negative FCF could prevent Box from scaling up to widen its moat against bigger challengers.

What do the valuations say?

Drexel Hamilton's bullish view on Box is based on the notion that an EV/Sales ratio of 3.3 is cheap for a company with its growth figures. For example, two other high-growth cloud service stocks with comparable sales growth -- Twilio and Veeva -- have respective EV/Sales ratios of 4.6 and 8.2 based on next year's projected revenues. It's also lower than the current industry average of 4.8 for application software makers.

Assuming that Box is "fairly valued" with an EV/Sales ratio between Twilio and Veeva's, it's certainly possible that Box could rise to White's price target of $26. However, what bothers me about that estimate is that it's based on a long-range forecast, and a lot can change in the cloud storage industry within two years. If Amazon, Microsoft, and Google continue slashing prices and piling on more features, Box could struggle to retain its top customers.

I think Box has solid sales growth, and its growing list of big enterprise customers indicate that it has a lot of staying power. It also did a great job at adding more services and partnerships, narrowing its losses, and achieving positive free cash flow last quarter.

However, claiming Box can rise 60% based on next year's sales estimates is a bit too optimistic. It's hard to tell how much storage prices will fall over the following year, and Box CEO Aaron Levie even once admitted that cloud storage would likely be "free and infinite" in the future. Therefore, investors should temper their expectations for Box based on future developments across the cloud market.