These may seem like challenging times to be selling DVDs, washing machines, and desktop computers, but at least one Wall Street pro is warming up to Best Buy (BBY 1.47%) as an investment. Piper Jaffray analyst Peter Keith upgraded Best Buy stock from "neutral" to "overweight" on Monday, sending the shares 9.6% higher last week. He's also raising his price target on the shares from $45 to $55.

Keith is tugging at both the supply and demand ends of the model to justify his renewed confidence in Best Buy stock. He thinks that hhgregg's decision to shut down 88 stores and three distribution centers, coupled with the growing liquidity concerns at Sears Holdings (SHLDQ), will benefit Best Buy by eliminating or at least reducing local competition at the bricks-and-mortar level. He also thinks new iPhone and Samsung rollouts will usher in a hearty smartphone upgrade cycle later this year, pumping up demand for consumer electronics.

If there are fewer retailers out there and consumer demand is on the rise, more traffic should come Best Buy's way. Keith thinks hhgregg's closures and Sears' potential to do the same could help prop up Best Buy's comparable-store sales by 200 basis points -- or 2%. That's a rational thesis, but only if Best Buy isn't merely grabbing a thicker slice of a shrinking pie. 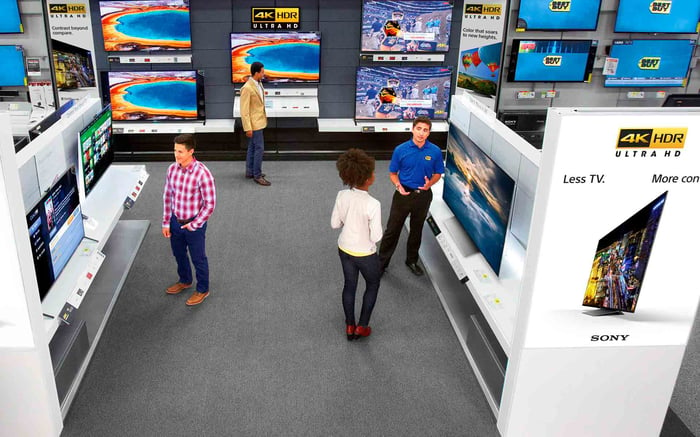 There's a problem with consumer-electronics superstores

We live in a golden era of consumer electronics, but Best Buy isn't exactly riding the wave. The stock is holding up well -- up 15% so far this year, and that was after a 40% surge last year -- but the fundamentals aren't getting substantially better.

Enterprise revenue and comps declined at Best Buy during the holiday-containing quarter. Margins, earnings, and online sales are showing signs of improvement, but are margin and bottom-line growth sustainable if revenue doesn't turn higher? Double-digit improvement in online sales is encouraging to see, but it's obviously coming at the expense of physical-store sales, since those purchases are baked in to the comps that were still slightly negative this past quarter.

Best Buy is in a climate in which it's difficult to compete with pure e-tailers with lower overhead, and digital delivery has blown up the physical-media sales that were low-ticket items but encouraged frequent visits.

Piper Jaffray's Keith isn't necessarily wrong. Rivals' store closures and a wave of new products could provide a near-term boost to Best Buy's fortunes. However, the stock's heady run -- up 61% since the start of last year -- seems to be discounting the near-term recovery. Best Buy's long-term outlook remains problematic, and that's why it's dangerous to chase the rally for a stock in a problematic retailing niche.