Shares of the wearable-tech leader move 9.6% higher after rolling out Alta HR a few days ahead of schedule.

Every dog has its day, and sometimes its week. Shares of Fitbit (FIT) rose 9.6% last week, moving higher after the company announced retail availability of its new fitness tracker a bit earlier than expected.

Fitbit's Alta HR is an update to Alta, the activity-monitoring bracelet that shipped more than a million units when it was introduced during the first quarter of last year. Fitbit had originally unveiled Alta HR in early March, promising worldwide retail availability by early April. On Monday, it announced global availability of Alta HR.

There may not seem to be much of a difference between late March and early April. We're talking about a head start of one or two weeks at the most. However, it does mean that Alta HR will be scoring some sales during the first quarter. Those sales may come at the expense of recording them during the second quarter, but it still suggests that first-quarter financials could clock in ahead of earlier expectations. 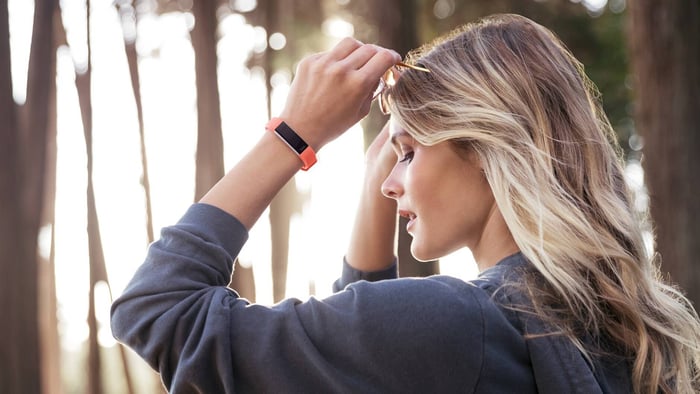 Investors won't be made whole by last week's big bounce. We're still talking about a stock that's trading 19% lower year to date, and that's after a 75% plunge in 2016. The stock has shed 89% of its value since peaking two summers ago, shortly after its IPO. But the move up is still a welcome break from the deluge.

Alta HR won't top a million units shipped the way Alta did last year during its debut quarter. Alta hit the market on March 9 of last year, a couple of weeks earlier than this year's updated model. Fitbit's also in a rut, and retailers are unlikely to load up on any fitness tracker as they did last year, when Fitbit sales were still growing.

Life has been rough for Fitbit and its investors. Revenue plunged 19% during the holiday-containing quarter, the first decline in Fitbit's public history. And it won't be the last year-over-year drop. Fitbit sees revenue plummeting 22% to 31% in 2017.

Pushing shipments into the first quarter may trigger an upside surprise for the period when it reports fresh financials in early May, but that same report will probably be saddled with weak guidance for the second quarter. This is a zero-sum game, and unless giving Fitbit an early start on pushing Alta HR -- now the world's slimmest tracker with continuous heart-rate monitoring -- it shouldn't make a difference. Fitbit stock did move higher last week, but it had declined in each of the four previous weeks. A step forward after several steps back isn't progress, but at least it's a break from the retreat.