This is a really big deal.

After all, Intel doesn't sell chip technology to its major customers today, though it certainly has ambitions to do so in the future. Instead, it sells finished products that it designs itself, using mostly its own manufacturing technology. So, it's important to have a sense of not just what manufacturing technologies Intel has today and coming down the line, but also what the company plans to do with it to build salable, competitive products.

At the event, Renduchintala talked about Intel's plans to fundamentally change how it builds future processors for personal computers. Let's take a closer look.

Intel first talked about the "old" way it has designed chips, showing how the old methodology called for everything to be integrated into a single piece of silicon. 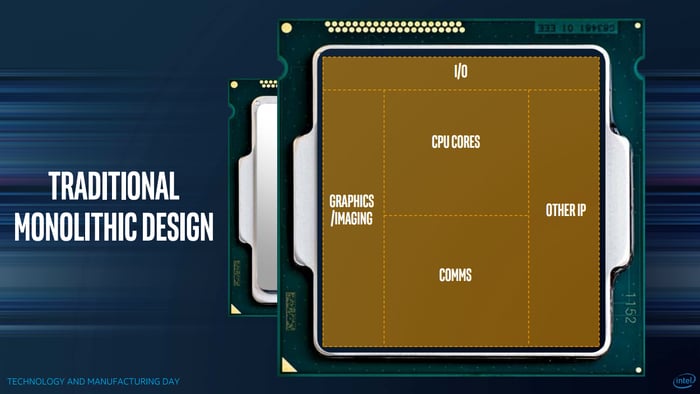 About the chip in this image, Renduchintala said that it's "pretty typical of what the industry has traditionally done."

"It's monolithic, where all the [intellectual properties] are constituted in the same process technology," the executive explained.

Renduchintala went on to say that the need to build these individual technologies in the same manufacturing technology, which has been necessary since they're all integrated into a single piece of silicon, is "constraining" to the company.

"Intel has a rich portfolio of [intellectual property] in an array of process nodes, all optimized to localized power, performance, and area, or PPA" he began. "And this presents an incredible opportunity for Intel in creating heterogeneous [systems-on-a-chip]."

What Renduchintala means is that instead of building a single piece of silicon that integrates all the key technologies, the company can build individual subsystems in different manufacturing technologies and stitch them together using a technology that it calls Embedded Multi-Die Interconnect Bridge. 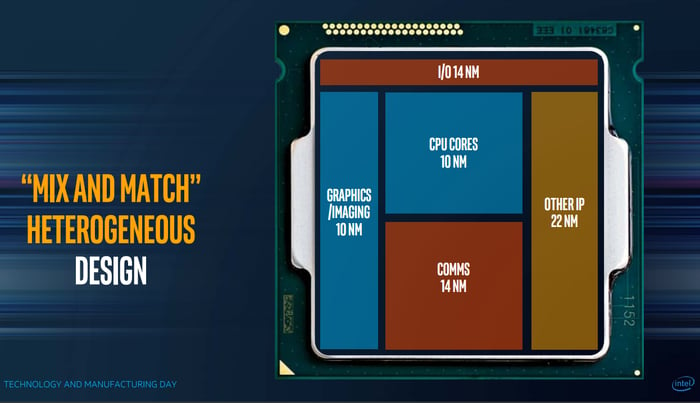 Renduchintala said this new design methodology will have "a profound impact on how [Intel] will deliver products to the market now and in the future."

The executive explained how this new methodology allows Intel to "mix high-performance blocks of silicon and [intellectual property] together with low power elements made from different nodes for extreme optimization."

Intel didn't go into specific details about the future products that will be built using this heterogeneous design methodology, but if Intel can get it right. then it's not hard to imagine, and it's easy to get excited about the possibilities this new methodology opens up.

Today, Intel is quite limited in the number of unique chip variants it can build. Remember, not only does Intel work under the constraint that everything needs to be built using the same manufacturing technology, but it also has to deal with the reality that since everything is integrated into a single piece of silicon, it can only really afford to build a handful of chips that it needs to use to address a wide range of markets.

You might be surprised to learn that Intel's entire mainstream desktop processor family -- which includes countless variants at a very wide range of price points -- is made up of just two distinct silicon dies. Those same dies are also used for the company's high-performance notebook products.

Intel does a reasonable job of using those two chips to span such a large cross-section of the overall personal-computer market, but with a little imagination it's not hard to see how Intel could -- using this new product-development methodology -- broaden the range of products that it offers into these markets. Such a broadening of the portfolio would probably have a positive impact on both product margin and product mix: It's likely that the former would go up, and the latter would become richer.

Today, Intel's main offerings in what it calls the "enthusiast gaming" market are chips known as the Core i3 7350K, Core i5 7600K, and Core i7 7700K. The 7350K is simply a dual-core desktop chip that runs at a high frequency and can be adjusted by the user. The 7600K and 7700K are quad-core desktop chips that run at higher frequencies than their non-"enthusiast gaming" counterparts and, like the i3, have user-adjustable frequencies.

These chips do well for Intel, but there are some problems with them. Since they're based on the same silicon dies as the company's more mainstream desktop and notebook chips, they include integrated graphics processors that take up a significant portion of chip space.

Enthusiast gaming users aren't going to use those graphics processors, so Intel is in effect selling chips to users that are larger than they need to be, and thus more expensive to manufacture than they ought to be.

In an ideal world, Intel could sell chips without taking up all that space with graphics, lowering Intel's product costs and improving its margin. It could even boost its profits by offering chips that replace that wasted graphics silicon with more of the stuff that enthusiast gamers would be willing to pay for, such as more I/O, CPU cores, and cache memory.

The enthusiast gaming market isn't yet large enough to justify separate monolithic dies, so Intel simply repurposes or tweaks silicon dies that it uses for other, higher-volume segments, which means certain segments get suboptimal products because those chips were designed subject to too many constraints.

In a world where Intel can simply mix and match intellectual properties to build particular products, Intel could have the ability to remove the bits that enthusiast gamers aren't going to use or pay for -- i.e. the graphics block -- while building out products that include more of what those customers are willing to pay for, potentially driving up product mix.

Now, this is just one example, but the personal-computer market -- as Renduchintala pointed out at the company's investor meeting back in February -- isn't one-size-fits-all. There are lots of sub-categories of the market that may not have been worth doing specialized chips for under the old monolithic chip design methodology but that in this new world of heterogeneous chip design would be great candidates for specialized chips.

Such specialization could mean better products for Intel's customers and better cost structures for each product segment, which together could lead to a much more successful and profitable Intel.