Intel plans to move this product family to internal manufacturing, continuing a recent trend of Intel building more of the chips that it sells in-house.

At Intel's (INTC -0.88%) Technology and Manufacturing Day, the company disclosed that it plans to move several products over to its 14-nanometer chip-manufacturing technology over the next year.

One of those product categories, Intel says, is its networking chips. 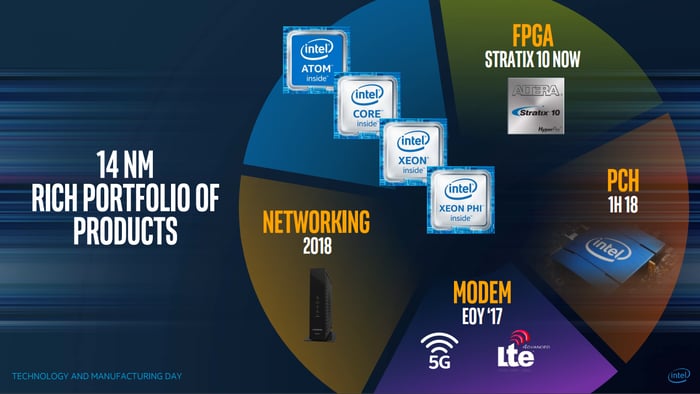 At first, this might seem a little bit confusing. After all, today Intel sells Xeon D processors -- built using the company's 14-nanometer technology -- targeted at the networking market. Additionally, Intel recently announced its Denverton family of Atom-based system-on-a-chip products targeted at both dense servers and the low-end network appliance market.

So if Intel is already selling 14-nanometer-based chips into the networking market today, then why is the company telling the public that it plans to shift over its networking chip portfolio to 14-nanometer technology in 2018?

Not those networking chips!

The chips mentioned above are chips used as processors within network appliances -- think of, for example, routers.

Today, Intel's best networking chips -- like its FM10840 Ethernet controller -- are manufactured in 28-nanometer chip technology. Intel, of course, doesn't have an internal 28-nanometer technology, which means that the company is having third parties (likely Taiwan Semiconductor Manufacturing Company) manufacture them.

It's these products that Intel is likely planning to manufacture internally.

Why move these chips internally?

There are several reasons that Intel would want to land these networking chips on its own manufacturing technology.

For one, Intel has big, expensive factories that it would like to keep filled with as much chip volume as possible. These networking chips don't sell in huge quantities, but they tend to be large, complex products and could be effective in helping to keep the company's last-generation chip manufacturing plants busy.

Beyond helping to fill factories and potentially reduce Intel's manufacturing costs relative to the cost of using external manufacturing, there are likely to be technical benefits to using internal technology, too.

For example, Intel talks a lot about how its 14-nanometer technology is denser and higher-performing than competing 14/16-nanometer manufacturing technologies. If those claims hold up in the real world, then Intel could potentially reap product performance and/or power efficiency advantages by using its own manufacturing tech rather than using third-party technologies.

To the extent that Intel can utilize any manufacturing advantages to build better products than it could have otherwise, it could improve its competitive positioning in this market, which might ultimately help the chipmaker gain market share.

Intel is slowly but surely migrating products that it had previously manufactured elsewhere into its own manufacturing facilities. Considering that Intel wants to be able to keep its chip-manufacturing plant utilization high, this is a pretty sensible and straightforward move.

Intel moving its networking products internally isn't a game changer, but the fundamental trend of Intel finally moving chips that were previously manufactured externally to internal manufacturing is a positive one.