Chipotle Mexican Grill (NYSE:CMG) is playing games again. The fast-casual chain introduced a new online diversion this week, rewarding players with a small helping of free food. "Spot the Imposter" is the digital plaything this time around, and just like A Love Story Game and Guac Hunter last year, it's a strategy that's as layered as some of its burritos.

The hook is a simple casual game, along the lines of Guac Hunter's photo hunt and A Love Story Game's card-matching. Spot the Imposter's appeal doesn't rely on the appreciation of diehard gamers. It's a ho-hum endeavor where folks simply scan Chipotle's menu components to spot the artificial ingredient. Click on the baddie, and get an offer for a one-time reward of a free side of chips and guacamole.

It's a promotional message in the wrapper of a casual game, but it's ultimately marketing. Chipotle gets the player's phone number as a way to serve up a digital offer, but it also gains the right to keep reaching out to the player in the future. It's a game, and everybody has an angle. 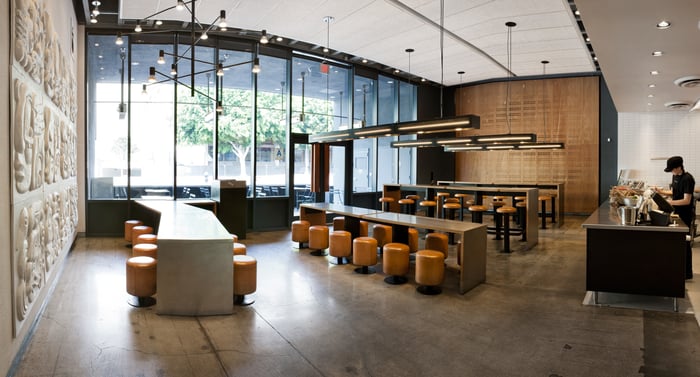 Spot the Imposter, Guac Hunter, and A Love Story Game are all small potatoes compared to Chiptopia, the three-month temporary rewards plan that was supposed to set the stage for a permanent loyalty program. Chiptopia was a success in many regards. Chipotle got 6 million of its customers to sign up for the free program, and 2.5 million of them took the time to make at least three visits in any of the three months -- July, August, or September -- to win a free meal.

Comparable-store sales didn't turn around. Chiptopia got its most frequent visitors to make more repeat trips, but it didn't win back the folks who had sworn off Chipotle following 2015's foodborne-illness outbreaks. Comps are starting to turn around now, but only because of the brutal double-digit percentage declines the company experienced in the prior year.

Summer is around the corner, and we have to wonder if Chipotle will give Chiptopia another summertime go. We also have to wonder if it will be a permanent program, one that will be inviting to more than those willing to commit to consuming a ton of Chipotle in a single month to earn a free burrito or bowl.

Chipotle needs to do more than it's doing right now. The one-off games and short-lived Chiptopia promotion aren't enough. Shares have closed lower the day after Chipotle reported earnings in five of the past six quarters, but recently unloading its ShopHouse concept should give the company more time to focus on a turnaround at its namesake chain. Chipotle needs a real Chiptopia -- a way to get to know its customers better and keep them close, through more than just bland casual games.