Samsung is hoping to rise like a phoenix from the ashes of the Galaxy Note 7 disaster on the back of Bixby, its new AI-enabled virtual assistant.

Samsung's (NASDAQOTH: SSNLF) head of research and development, InJong Rhee, revealed in a blog post that Bixby, the company's entry into the crowded virtual-assistant segment, would be available on the Galaxy S8 smartphone. This confirmed rumors that had circulated for some time, and provides Samsung with the chance to overcome the negative sentiment and financial damage that resulted from the Galaxy Note 7 fiasco, as outlined by my colleague Evan Niu. Samsung eventually pulled the phone due to the battery issues that caused them to catch fire.

Samsung first revealed its aspirations in the field of artificial intelligence (AI) late last year when it acquired Viv, a company working on a next-generation virtual assistant of the same name. Viv was founded by some of the creators of Apple's (AAPL -2.01%) Siri. The eponymous Viv was renamed Bixby after the Samsung acquisition. 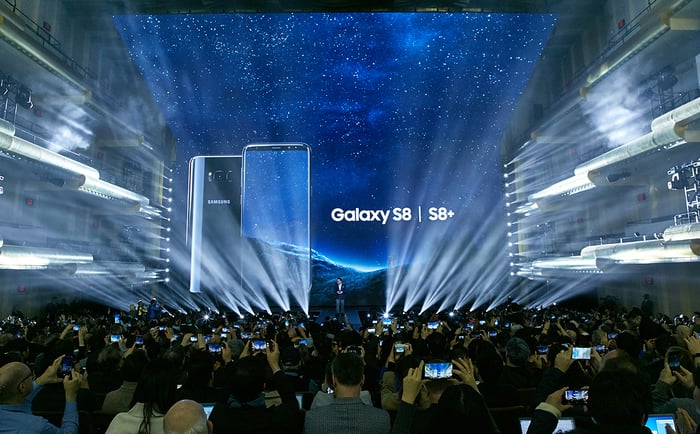 What was intriguing about Viv was the revealed functionality that vastly exceeded currently available virtual assistants. At the TechCrunch Disrupt conference in New York last year, then Viv CEO Dag Kittlaus demonstrated the virtual assistant's capability.

Asking questions in a conversational style rather than using specific syntax or commands, the system was able to provide answers to complex questions like, "Will it be warmer than 70 degrees near the Golden Gate Bridge after 5 p.m. the day after tomorrow?" The AI was also able to respond to follow-up commands, something not currently available in competing assistants. It was also able to send flowers, reserve a hotel room, and transfer money to a friend.

But can Bixby deliver?

Whether or not Bixby will live up to Viv's potential remains to be seen. Rhee's blog post indicates that Bixby will be able to switch seamlessly between voice and touch commands without having to restart the task. The unified system will accept voice commands that are tied into a number of native apps that will interact to complete requested tasks. The company has plans to integrate additional apps over time.

Bixby also appears to be the hub of much more ambitious plans by Samsung. Rhee indicated that Bixby will gradually become available in all the company's appliances, including TVs and air conditioners. As long as the device is voice enabled and has an internet connection, it will be able to connect to Bixby and be controlled using voice technology. The release of a new Connect Home router, which acts as a hub for internet-of-things devices, shows that this is also a coordinated play into the home automation market.

Phoenix from the ashes

This chart shows that Samsung has much more riding on the Galaxy 8 than Bixby. This is its first major smartphone release since the Galaxy Note 7 fire sale, which cost the company an estimated $5 billion, according to The Wall Street Journal (subscription required). This allowed Apple to take the top spot for the first time since 2011.

Samsung hopes consumers will give it the benefit of the doubt, and appears to be positioning Bixby as one of the defining features of the Galaxy 8. If Bixby's functionality lives up to expectations, Samsung may just have a hit on its hands. If not, it may be playing with fire.