Please ensure Javascript is enabled for purposes of website accessibility
Log In Help Join The Motley Fool
Free Article Join Over 1 Million Premium Members And Get More In-Depth Stock Guidance and Research
By Daniel B. Kline - Apr 4, 2017 at 8:47AM

The company may have some bumps in the road, but its underlying business is very strong.

Like a blemish on a supermodel, sometimes there are flaws with even the the most successful companies.

That has sometimes been the case with Starbucks (SBUX 3.46%) when a small negative, a bad piece of data, or sometimes even a good piece of data comes out, and that becomes the story, sending the chain's stock price down. That's what happened after Starbucks reported Q1 2017 earnings on Jan. 26. Something incoming CEO Kevin Johnson talked about during the call became a negative media story even though when you examine things, what he mentioned was a short-term problem that clearly shows a long-term strength.

"Mobile Order & Pay has also created a new operational challenge that has been building in lockstep with volume growth, and it's most pronounced in our highest-volume stores at peak -- significant congestion at the handoff plane," Johnson said during the earnings call, which was transcribed by Seeking Alpha (registration required). "This congestion resulted in some number of customers who either entered the store or considered visiting a Starbucks store and then did not complete a transaction."

Those comments, and others on the topic by current CEO Howard Schultz, got a lot of attention. Along with what some analysts considered disappointing growth in domestic stores, the comments sent shares down in the days after the report. In reality, though, having too many customers overwhelm the system and seeing lower sales in U.S. stores are related, and solvable.

The chain has aggressively attacked the problem, with Chief Digital Officer Adam Brotman leading an effort to introduce new procedures at the 1,000 highest-volume Mobile Order & Pay stores. Those changes include "adding new roles and resources to specifically support Mobile Order & Pay, and the testing of new digital enhancements, including text message notifications when a mobile order is ready for pickup," Johnson said.

The negative news that got reported after the company released earnings caused a very temporary drop: 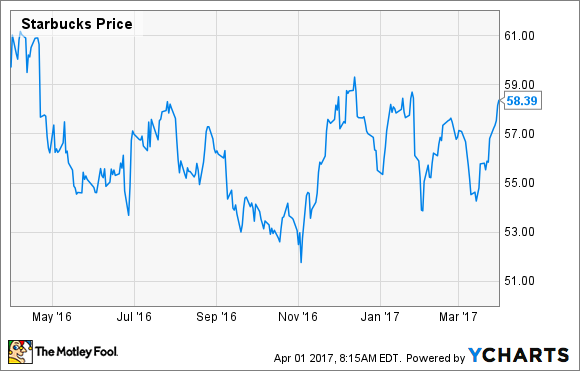 That's because it's hard to be upset over what Starbucks actually reported.

These are not problems

In Q1, the chain reported record revenue of $5.7 billion, a 7% increase over Q1 2016. In addition, earnings per share rose 11% year over year, climbing to $0.51. Global same-store sales were up 3%, and the U.S. comps, the ones that troubled some analysts, increased by 3% as well. That may not have been as strong as expected, but it's still very strong.

The Mobile Order & Pay problems probably did cost the chain some sales, but short-term execution problems won't affect long-tern results as long as they're sorted out quickly. Johnson made it clear that the chain's digital capabilities are a huge strength going forward.

"Total member spend increased 21% year on year, driven in part by the strong early success of our recently launched personalization capabilities," he said. "Mobile Order & Pay had a banner quarter, representing more than 7% of total transactions, double the figure from Q1 last year, and we now have nearly 1,200 stores with 20% or more Mobile Order & Pay transactions at peak, compared to only 13 stores one year ago." 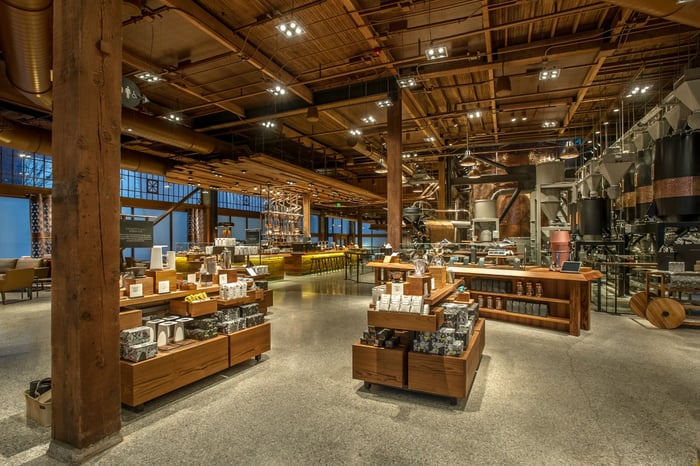 Starbucks has huge growth plans over the next five years, including adding 12,000 new stores globally, and using Schultz in a new role growing the company's premium business. In addition, the chain plans to open a store a day in China for roughly the next five years. The company currently has 2,600 stores in 127 Chinese cities, "with some of the company's most innovative, efficient, and profitable stores producing record revenue and strong same-store-sales growth in FY '16," according to a press release.

The biggest opportunity for the chain may be growing its premium brand, including opening new Roastery locations in Shaghai, Tokyo, New York, and Milan over the next two years. In the original Roastery in Seattle, sales grew by 24% in 2016 over the previous year and another 18% in Q1 of 2017. Customers at the premium-coffee palace spend an average of four times what a typical customer spends in a regular store.

In addition to growing its Roastery business, Starbucks will be launching up to 1,000 Reserve stores around the world and adding Reserve bars to up to 20% of its existing locations. On top of those opportunities, Starbucks plans to double its food business over the next five years and has continually grown its ready-to-drink grocery-store business.

Any company that innovates like Starbucks hits the occasional bump in the road. The Reserve brand and Roastery launches may take time to ramp up, but the chain is well positioned to launch new products. It can leverage its 12 million-plus Rewards members by giving them incentive to try new products or visit new locations.

Starbucks has a growing business with a major foothold in China, something few companies have been able to pull off. It has proved in its Seattle Roastery that a market exists for premium experiences, and it has leading-edge technology as well as opportunities to grow food sales, while expanding its afternoon and evening business. Not all of those efforts will go completely smoothly, but shareholders have nothing to worry about in the long term, as long as they can handle the occasional short-term hiccup.