Please ensure Javascript is enabled for purposes of website accessibility
Log In Help Join The Motley Fool
Free Article Join Over 1 Million Premium Members And Get More In-Depth Stock Guidance and Research
By Todd Campbell, Anders Bylund, and Jason Hall - Apr 5, 2017 at 8:56AM

Markets never go up in a straight line, so a correction could be coming. If so, these stocks might be best to buy.

Brookfield Infrastructure Partners (BIP 3.19%), Wal-Mart (WMT -0.28%), and Johnson & Johnson (JNJ 0.29%) are very different companies, but they share one thing in common: Our Motley Fool contributors think they're all great investments when markets tumble. If the stock market hits a rough patch, here's why it might be smart to buy these stocks. 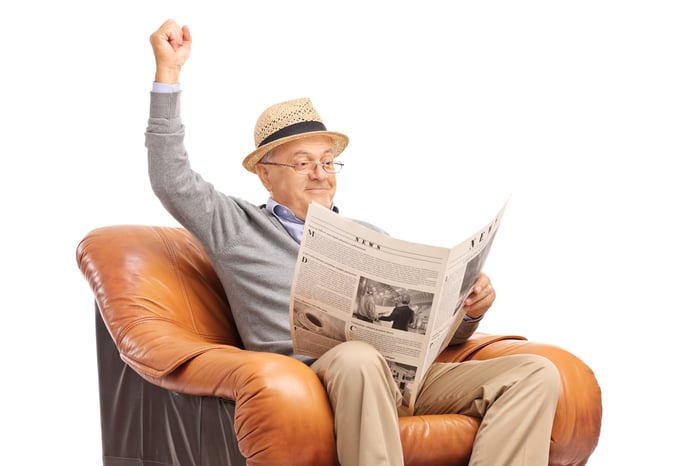 This is because the very nature of the assets Brookfield Infrastructure owns and operates are necessary to everyday life for tens of millions of people, no matter the economic environment. 48% of last year's funds from operations was from long-term contracts, while another 43% was from its regulated utility holdings. That's a significant amount of cash flows that can be counted on, rain or shine. Furthermore, its geographic diversity can help offset regional economic weakness that may have some effect on part of the business.

Brookfield Infrastructure is also built to pay its investors -- and to grow that payout. At recent prices, the dividend yield was over 4%, and management is committed to increasing the per-unit payout 5%-9% per year.

While it's possible its share price will fall during the next market crash, savvy investors who understand the business should feel confident that they can hold tightly to their investment and count on that nice dividend, because Brookfield Infrastructure's operations won't miss a beat just because the market's a mess.

Anders Bylund (Wal-Mart): Yep, you heard me right. Wal-Mart would be a great dividend stock to own in the next major market crash.

The fact of the matter is, consumers have to tighten their belts when times are hard. So in periods of high unemployment, limited wage increases, and waning real estate prices, low-cost stores tend to do alright. And Wal-Mart is still the king of low-cost country.

Here's how Wal-Mart made out in the 2008-2009 financial crisis, for example. The shaded area might as well show a golden age for Sam Walton's retail empire rather than an official recession: 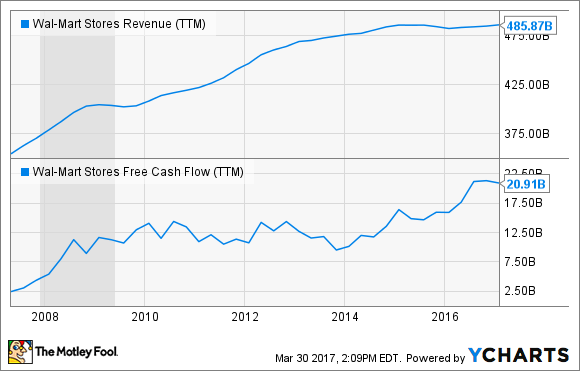 Beyond that resilient quality, Wal-Mart also behaves like a true dividend champion. Payouts have increased in each of the last 42 years without fail, even if the boosts have slowed down a bit recently. The current yield stands at a solid 2.9%, with only 47% of the company's free cash flows needed in order to keep those checks coming.

Unlike many other recession-resistant investments, traders and analysts have largely caught on to Wal-Mart's crash-market performance. Share prices actually rose 19% in 2008 while the rest of Wall Street burned. So, you can't simply resolve to pick up new shares on the cheap when disaster strikes -- you're better off getting your Wal-Mart ducks in a row ahead of time.

And if share prices do fall precipitously for some reason, there's nothing stopping you from buying more. And those dips can do wonders for your dividend reinvestment returns, too.

Sometimes, a good defense is the best offense

Todd Campbell (Johnson & Johnson): When markets get tough, it can help to invest in companies where demand isn't tied to the economy, and perhaps no company is less exposed to economic whims and whispers than healthcare giant Johnson & Johnson.

Johnson & Johnson is best known for its consumer goods brands, such as Band-Aid, but it generates most of its money from selling prescription drugs. Last year, it recorded $33.4 billion in sales from brand-name medicines used to battle cancer, HIV, heart disease, and autoimmune disease.

The company sells medical equipment and instruments that are important for surgeries, too, and thanks to its diversity across healthcare, its performance during market downturns has been impressive. For example, between March 31, 2007, and March 31, 2008, Johnson & Johnson's shares declined by 15.5%, while the S&P 500 lost 37.9% of its value. Yes, that's still a loss, but given how many stocks performed worse than the S&P 500 during the Great Recession, I'll call it a win.

Of course, there's no guarantee Johnson & Johnson will do as well the next time around, but there's reason for optimism. The company boasts a bulletproof balance sheet, and it runs one of the most prolific R&D departments in the business. It's also a Dividend Aristocrat, with an envy-inspiring 54 consecutive years of dividend increases. When the markets get dicey, it's one of the first stocks I'll buy.