Please ensure Javascript is enabled for purposes of website accessibility
Log In Help Join The Motley Fool
Free Article Join Over 1 Million Premium Members And Get More In-Depth Stock Guidance and Research
By Demitri Kalogeropoulos - Apr 5, 2017 at 9:18AM

A few surprising stats that investors might not know about the consumer products titan.

As one of the biggest consumer products companies around, Procter & Gamble (PG 1.44%) likely earns at least a small piece of your monthly spending budget. After all, it owns a dominant share of staple industries including shaving, toothpaste, laundry detergent, and diapers.

Yet this nearly 180-year-old business can still pack surprises for investors. Here are a few key operating trends and facts that you may not know about P&G.

Annual revenue has declined sharply in each of the last two years. In fact, fiscal 2016 marked P&G's lowest sales point since 2006. 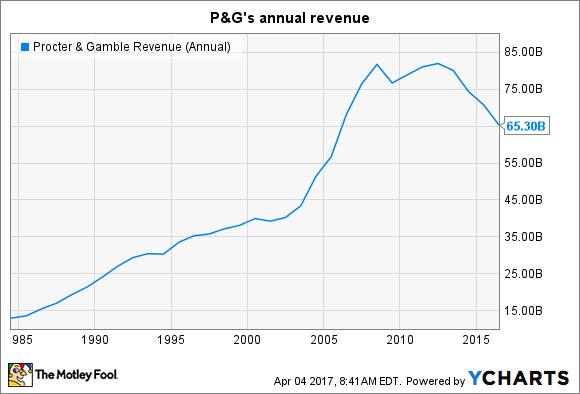 Part of this brutal decline is due to missteps by the company that have led to significant market share drops. Its shaving business, for example, owns 65% of the global market today compared to 70% in fiscal 2013.

A bigger contributor to the sluggishness has been strategic, though. P&G shed over 100 brands from its portfolio in the past few years in a bid to become leaner, faster, and more profitable. As a result, it cleaved off about 15% of its sales base, but only about 5% of profits. P&G's strategy goes well beyond just removing its underperforming brands. Executives are nearly done with a complete reboot of how it does business. Every aspect of its operations, from manufacturing to advertising to shipping logistics, has seen a sharp reduction in complexity.

"We are a much simpler company," executives boasted in a recent investor presentation, with the number of manufacturing platforms down 50%, category/country combinations slashed by 70%, and 30% fewer employees.

Even though its sales base is down 11% in the last five years, P&G generated roughly the same total earnings in 2016, $10.5 billion, that it did back in fiscal 2012. Rising profitability has neutralized the slump as P&G's net operating margin passed 15% of sales last year. 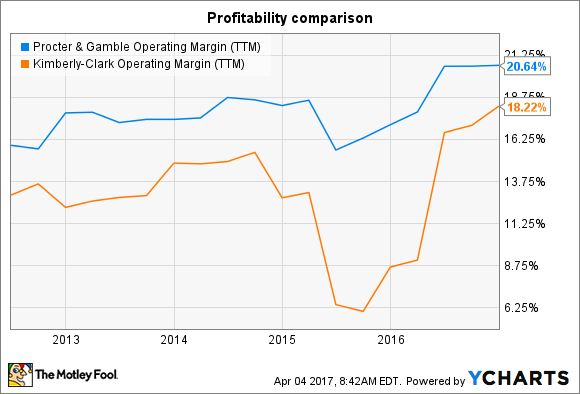 The improvements put the company near the top of the list in its industry, beating rival Kimberly-Clark by a solid margin.

P&G's 60-year dividend streak makes it one of the longest-running payouts in the market. Yet many investors might not know that this historic dividend recently accounted for over 100% of the company's annual earnings. The company paid out $2.59 per share in dividends in fiscal 2015 compared to $2.44 per share of profit.

P&G's dividend cushion slumped as the company booked one-time losses from discontinued business lines and foreign currency devaluations against the U.S. dollar. Thus, the dividend was never in as much trouble as reported earnings would suggest. P&G's payout ratio based on earnings from continuing operations.

On the other hand, a $9 billion windfall from its beauty brand sales this year are temporarily swinging earnings -- and the payout ratio -- in the other direction. Adjusting for all of this noise, P&G's payout promise has held roughly consistent at an elevated, but not unmanageable, two thirds of earnings.

So far, cash returns are the most direct shareholder benefit to come out of P&G's strategic transformation. The combination of big brand sales, including multibillion-dollar franchises like Duracell, and the desire by management to simplify the business, has resulted in a transfer of a significant portion of the company to owners in the form of stock repurchases and dividends. P&G is on pace to deliver $18 billion of capital per year to its owners since the process started, including $22 billion in fiscal 2017 alone, for a total of $70 billion in fiscal 2016 through 2019.

The good news for investors is that the program pushed up their total returns through a period of unusually weak operating results. But now comes the real test: whether the company can return to the type of steady market share gains that powered its impressive long-term growth before the recent downturn.