Please ensure Javascript is enabled for purposes of website accessibility
Log In Help Join The Motley Fool
Free Article Join Over 1 Million Premium Members And Get More In-Depth Stock Guidance and Research
By Harsh Chauhan - Apr 5, 2017 at 10:19AM

Amazon has plans to sell groceries online in India, and in physical stores, too.

India was reportedly the world's sixth-largest grocery market in 2015, with sales of more than $360 billion. Online grocery shopping is still in a nascent stage in the country, with one estimate putting the segment at less than $100 million, but the relatively small size of the online market hasn't deterred Amazon (AMZN 3.58%) from lining up a $515 million investment in food retailing in India over the next five years, according to Business Standard. Reports indicate Amazon is looking to sell groceries online and in brick-and-mortar stores.

Why Amazon is betting big on groceries in India

The Indian government opened up the food retailing market to multinational players last year by allowing foreign companies to solely own ventures as long as the goods that are sold are grown or processed in India, according to The Wall Street Journal. Not surprisingly, Amazon wants to take advantage of this policy, as online grocery retail in India could be a $25 billion business by 2020, according to retail consulting firm Technopak. 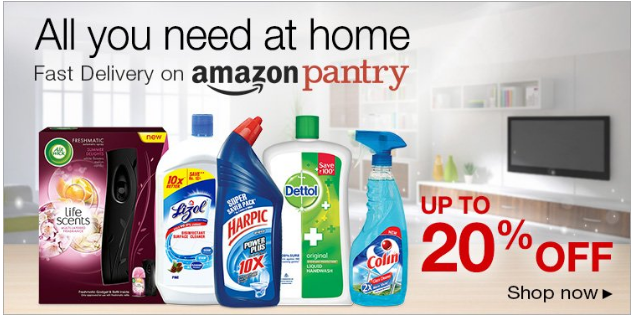 The e-commerce giant had already been testing online delivery of groceries and other household items in the Indian market through the Amazon Pantry platform. Amazon Pantry was initially launched as a pilot project in just one city in July 2016, but it has now expanded into 29 cities.

Amazon customers can choose from 5,000 everyday items made available by partner stores with a local presence, build a box of items, and have it delivered the next day for a nominal fee of INR 49 (less than $1) per box. Amazon Prime members, meanwhile, enjoy free delivery.

Consumables demand has shot up more than 250% in India over the last 18 months, according to one estimate, with product selections in the online marketplace jumping over 500% in the past year.

The New York Times reports that Amazon could be opening physical grocery stores in India. That might seem regressive for an online retailer, but this is a smart move as online grocery retail is expected to remain only a small portion of overall grocery sales in India.

Amazon looks to be trying to cover all bases in this huge market. It could consider using its physical locations as fulfillment centers, or build a hyperlocal delivery model.

The concept of online grocery retail isn't new in the Indian market -- a number of start-ups are already present. However, a number of them have reportedly already shut down or scaled back operations.

Amazon's primary competitor in India, Flipkart, shut down its grocery delivery after a failed pilot that promised to deliver basics such as fruits and vegetables to customers within the hour. Hyperlocal delivery start-up Grofers reportedly shut down operations in nine markets, after raising $165 million in funding from investors.

Bigbasket, meanwhile, is one of the very few online grocery retailers in India that's displaying some momentum, as it reportedly more than tripled its sales in fiscal year 2016 to INR 5.63 billion ($86.5 million). However, its losses shot up more than 350% from the preceding year to $42.5 million (at the current exchange rate) as the start-up quadrupled its presence and spent heavily on marketing.

The problem with Bigbasket is that it needs funding in order to keep growing. It raised almost $250 million from investors over five years to become one of India's leading online grocery retailers, but this won't be enough as it doesn't expect to be profitable until 2020.

This is where Amazon's deep pockets will come into play, as its reported $515 million budget for India is more than double what the country's leading online grocer has raised so far. The ability to spend could help Amazon dominate the multibillion-dollar grocery market in India.