Duluth Holdings (DLTH 1.68%), which sells casual clothing and workwear under its Duluth Trading brand name, had an interesting end to its 2016 fiscal year. The retailer lowered its full-year guidance after a disappointing third quarter, then managed to actually meet its original guidance after reporting a better-than-expected fourth quarter. The resulting full-year numbers for Duluth show the company's aggressive growth trajectory remains intact. To examine its 2016 performance in greater context, let's take a look at Duluth's multiyear track record. 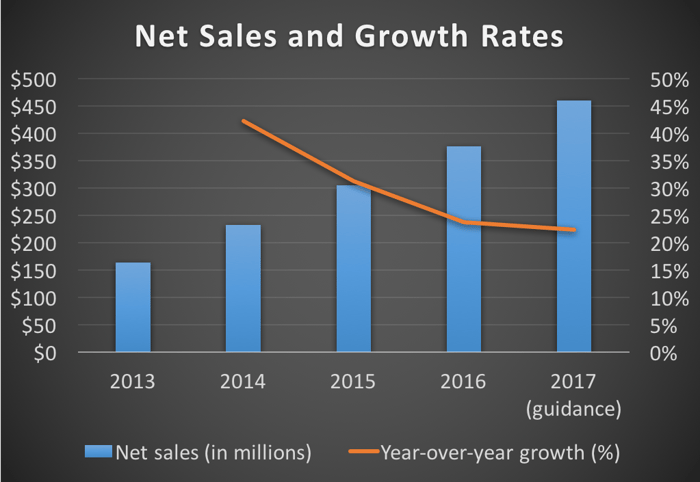 Considering the state of the retail industry in general today, Duluth is bucking the trend with annual sales increases that are healthy by any measure. Duluth posted net sales of $376.1 million in 2016, a 23.6% increase over the prior year. And from 2013 through 2016, its sales have grown at a compound annual growth rate (CAGR) of 32.1%. While that number will naturally level off a bit as the company gets larger, Duluth says it is targeting 20% annual top-line growth over the long term. And for 2017, the company is guiding for sales of $455 million to $465 million, which reflects 22.3% growth at the midpoint. Not bad for a company in the dying retail sector!

A shifting sales mix points to the future 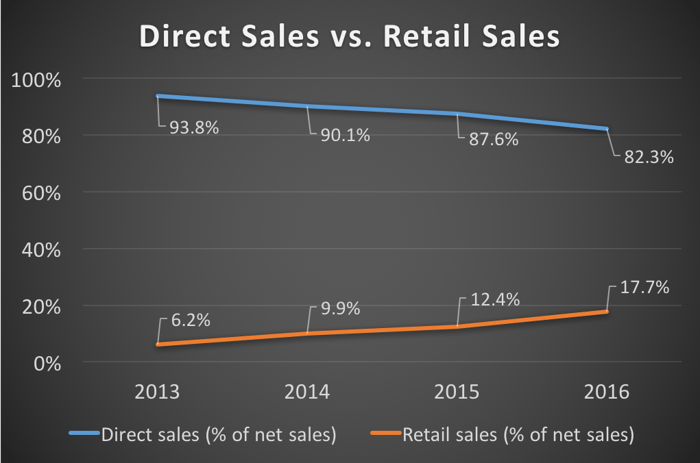 Duluth began life as a catalog and online retailer. It only began opening physical stores in 2010. But its sales mix is already beginning to shift dramatically as the company expands its retail locations at a breakneck pace. 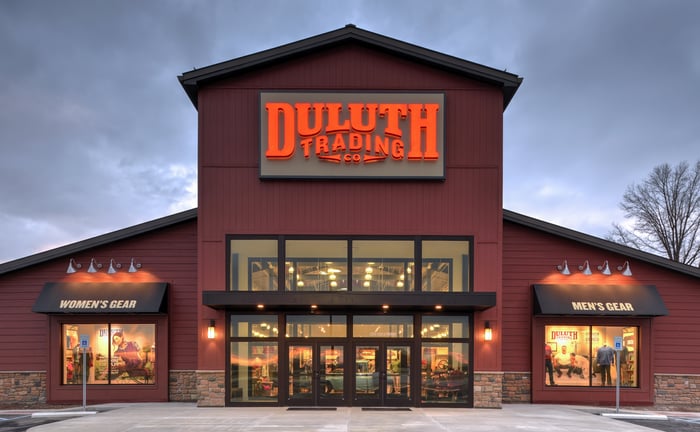 In 2013, the company's sales mix was 93.8% direct (online and catalog sales) and 6.2% retail. By the end of 2016, direct sales had declined to 82.3% of total sales, with retail sales now contributing 17.7% -- a gain of over 10 percentage points. This trend will become even more pronounced over the next several years as Duluth continues to open stores, with management stating it expects its retail operations to eventually contribute up to 35% of total sales. 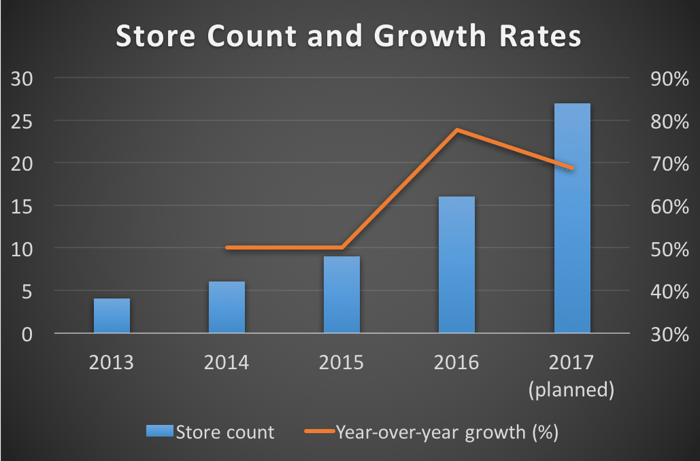 Whether Duluth succeeds in its top-line growth goals will largely depend on how well it can carry out its plans for new retail locations. At the end of 2013, the company had only four stores. By the end of 2016, that number had quadrupled to 16. And for 2017, Duluth says it will open 10 to 12 new stores (the locations of the first 10 have already been announced).

Though it's from an admittedly small base, 11 new stores in 2017 would represent a whopping 69% annual growth in store count. Moreover, the company is also on record saying it plans to accelerate the pace of new store openings in the years to come. Make no mistake, Duluth's ambitions are big. The company has identified 100 locations with the right customer demographics for its stores, making this potential runway for growth very long indeed.

Earnings may take a short-term hit, but it's probably for the best 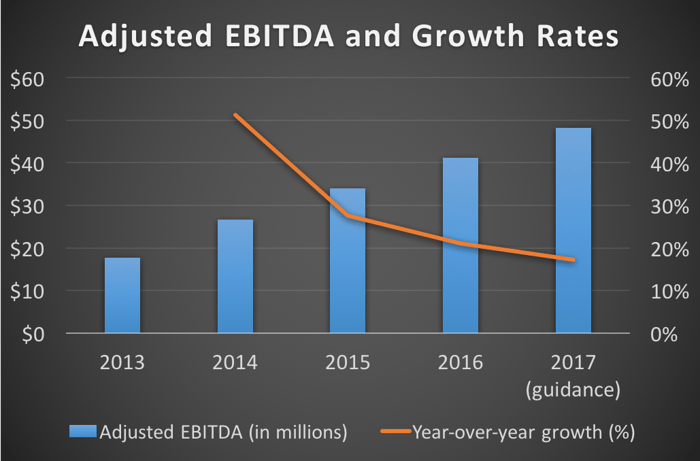 Because Duluth converted to a C corporation in 2015 (which had a big impact on its tax rate), multiyear comparisons of net income are quite muddy. Instead, take a look at adjusted EBITDA (earnings before interest, taxes, depreciation, and amortization) for a more apples-to-apples view of things. For 2016, adjusted EBITDA was $41.2 million, a 21.1% increase over the prior year. And from 2013 to 2016, this measure of top-line earnings grew at a CAGR of 32.8%.

While we should expect this growth rate to naturally come down a bit as the company gets larger, Duluth's long-term target for annual adjusted EBITDA growth is 25%. However, the company has noted that over the next couple of years, its rapid retail expansion will require substantial capital investment, which will impact adjusted EBITDA and net income in the short term. You can see this reflected in the company's guidance for 2017, which calls for adjusted EBITDA in the range of $47 million to $49.5 million, representing growth of 17.2% at the midpoint.

That may appear to be a step backward, but given the size of Duluth's market opportunities, trading short-term earnings for increased long-term sales seems like a sensible trade-off to me. And looking back at the company's success over the last several years, I'd say this retail growth story still has a lot of room left to run.