The paid music subscription model is finally working -- but there's still plenty of room for improvement.

Music streaming services accounted for the majority of all music revenues in the U.S. in 2016 for the first time ever, according to recent data released by the Recording Industry Association of America (RIAA). A report published by the RIAA said that estimated retail revenue from recorded music in the U.S. grew by 11.4% in 2016 to $7.7 billion, and streaming music accounted for 51% of that revenue.

"The primary driver of that growth was a doubling of paid streaming music subscriptions, which helped the American music business experience its biggest gain since 1998," the report said. 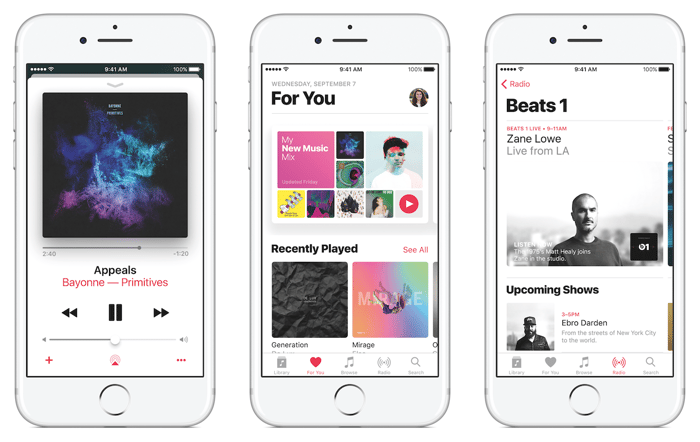 Streaming revenue brought in $3.9 billion in 2016, which was an increase of 68% year over year. What's fascinating about this is how fast streaming revenue took over the industry. As you can see from the bar chart below, streaming revenue accounted for just 9% of all music industry revenue in 2011 -- now it accounts for 51%.

What it all means for streaming players

All of the above facts aren't just important for the music industry as a whole, but also for Apple, Spotify, Pandora, and others. 2016 marked the first full year of Apple's paid subscription music service, which Apple says is "well past" 20 million subscribers right now. But the company's streaming service still falls far short of Spotify Premium's 50 million paid customers.

The huge increase in subscription music streaming revenue shows the market's viability, and it is forcing some companies to shift strategies. Pandora finally launched its first on-demand music streaming subscription service just last month, called Pandora Premium. The service lets users select which songs they want to listen to, download the songs for offline use, stream ad-free music, and get personalized music recommendations for $9.99 per month.

Up until last month, Pandora didn't offer a paid subscription service that fully matched Apple's and Spotify's on-demand streaming of songs and albums. Based on the RIAA data, it appears that Pandora's new subscription model is a step in the right direction, albeit a late one. Pandora severely lags behind Apple and Spotify, with just 4 million paid subscribers right now.

While increased music streaming revenue is a good thing for both the music industry and the companies betting on subscription services, there are a still a few problems.

The most glaring is that while U.S. music revenue ticked up in 2016, it's still only half of what it was in 1999. Cary Sherman, the chairman and CEO of RIAA, wrote in a blog post last month:

A year of growth in the U.S. music business is welcome news. It suggests that years of patiently nurturing a nascent streaming marketplace has begun to pay off. But it does not erase 15 years of declines, or continuing uncertainty about the future.

And that uncertainty may continue to plague music steaming services going forward. Apple was forced to transition away from digital downloads and toward its streaming service, but it's still eclipsed by Spotify and needs much more subscriber growth if it wants to be the music streaming leader.

Similarly, Pandora is playing catch-up to the premium subscription model, and it's unclear how the company will distinguish itself from the competition -- or if there's even enough room for another large music subscription player.

If 2016 was a good year for the music industry and the companies betting on its streaming future, then this year is one in which streaming companies and their investors should be cautiously optimistic.