It doesn't even matter if the FTC suit goes away, because Apple's isn't going anywhere.

Mobile chip giant Qualcomm ( QCOM -0.59% ) filed a motion earlier this week in the U.S. District Court of San Jose, California, requesting that a federal judge dismiss the antitrust lawsuit that regulators filed in January. The initial suit alleges that Qualcomm unofficially implements a "no license, no chips" policy that leverages its dominant position in cellular baseband modems to extract favorable licensing terms and royalty payments from customers, effectively precluding competitors from the market.

Qualcomm argues that there are no "factual allegations of anticompetitive harm" to competitors, and as such is seeking a dismissal. It will be up to federal Judge Lucy Koh to decide whether or not to grant the dismissal request. We do know that the FTC itself is in the midst of a transition -- one that is favorable to Qualcomm's position. Republican FTC Commissioner Maureen Ohlhausen was recently promoted by President Trump to chairwoman of the commission following Edith Ramirez's resignation, and Ohlhausen was the dissenting opinion in the 2-1 vote. 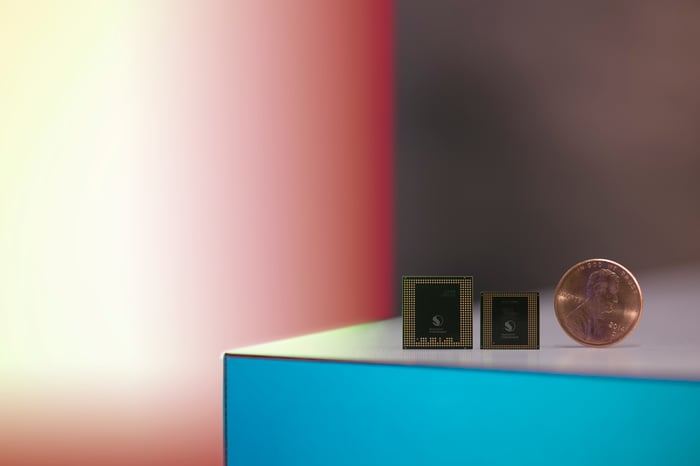 There are typically five FTC commissioners, which are nominated by the president and must be confirmed by the Senate, and no more than three commissioners can be affiliated with the same political party to encourage bipartisanship. Currently, there are only two commissioners (one Republican and one Democrat) and three empty seats.

The FTC's suit doesn't matter as much as Apple's

This is largely why the FTC's suit never had much teeth in the first place, since it was filed just days before Trump was inaugurated and just days after Ramirez announced her resignation. It's quite clear that Chairwoman Ohlhausen is uninterested in following through with pursuing Qualcomm for alleged anticompetitive practices, so what Koh decides is largely inconsequential since even if the case is not dismissed, the FTC under Trump really doesn't care or believe that the suit has merit.

On the other hand, Apple's ( AAPL 2.28% ) blockbuster lawsuit has much more far-reaching potential consequences. The Mac maker sued Qualcomm just a few days after the FTC did, more or less alleging the same anticompetitive behavior. Apple has made some pretty damning allegations, and provided its firsthand account of what it has been subjected to over the years. Importantly, Apple's legal battle with Qualcomm has expanded around the globe beyond the U.S. The iPhone maker is now suing the mobile chip giant it three different countries: the U.S., China, and the U.K. (Apple has filed two separate suits against Qualcomm in China).

Beyond Apple, Qualcomm is also being investigated by numerous other regulatory agencies around the world, including the European Union and Taiwan.

As far as the two companies' business relationship, Intel continues to catch up in terms of technical capabilities -- the new XMM 7650 modem could potentially score a broader design win in more variants of the forthcoming 10th-generation iPhone -- and Apple has a strong incentive to distance itself from Qualcomm as much as it can. Chipzilla was finally brought on as a second supplier recently following the expiration of Apple's de facto exclusivity agreement with Qualcomm.

So even if the Feds drop their suit, Apple will aggressively carry on.