The all-new Regals -- there are two -- will come in hatchback and wagon variants, as GM shakes up its old premium brand.

General Motors (GM 1.35%) took the wraps off of its all-new Buick Regal on Tuesday. As expected, the new Regal is a close sibling of the all-new Opel Insignia developed for the European market.

Like the Insignia, the new Regal will be available in two distinct body styles, neither of which is a traditional sedan. It's a big change for Buick.

First and foremost, the big news: The all-new Regal will come in "Sportback" and "TourX" versions -- or put another way, a hatchback and a wagon.

The Regal Sportback is the more sedan-like of the two, and I'm guessing it'll be the version selected by the majority of Regal buyers. Its styling is long and low-ish, though not so low as to be daunting to less-agile customers. It has what GM calls a "coupe-like roofline" that sweeps down to the tail, covering a roomy cargo area accessed via a very hatchback-like hatch. 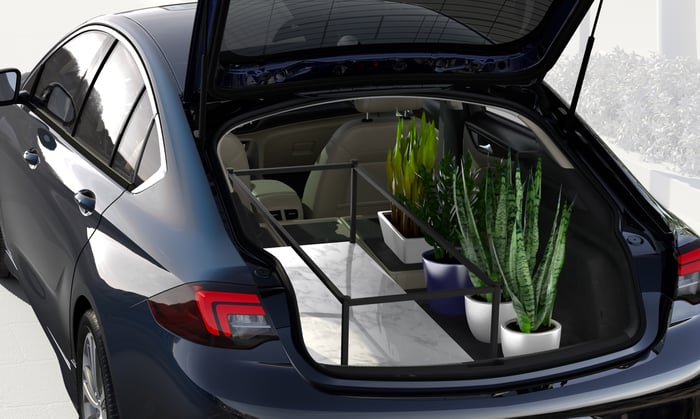 GM executives insist on describing the Regal TourX as a "crossover," but let's be real: It's a station wagon with some subtle rugged-looking touches not unlike those found on a Subaru Outback, Volvo V60 Cross Country, and Audi A4 Allroad. Those are likely to be the Regal TourX's chief competitors. GM says there's a small but significant and lucrative market for upscale station-wagon-like vehicles, and it's hoping the Regal TourX will capture a good slice of that market.

GM won't call it a "station wagon," but the 2018 Regal TourX sure looks like one. Image source: General Motors.

Both Regals sport Buick's latest "face," a handsome front-end design drawn from the Avenir and Avista show cars. The new Regals' wheelbase is about 3.6 inches longer than the current model's, allowing for a bit more room in the back seats. The TourX rides a bit higher than the Sportback and comes with all-wheel-drive standard. All-wheel drive is optional on the Sportback; base models will be front-wheel-drive. 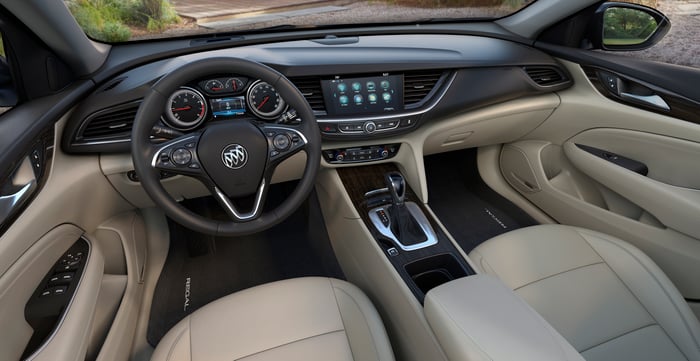 Both of the new 2018 Regals share a single drivetrain: GM's 2.0 liter turbocharged four-cylinder gasoline engine making 250 horsepower and 295 pound-feet of torque, through an 8-speed automatic transmission. Pricing hasn't been announced, but I expect the Sportback's pricing to be close to the current Regal sedan's; the TourX may cost a bit more.

The all-new 2018 Buick Regals will begin arriving at U.S. dealers in the fourth quarter of 2017.

The new Regals will be made in Germany

Some, including your humble Fool, had speculated that U.S.-bound Regals might be made in China. That was wrong: GM has confirmed that the new Regals won't be made in China, but they will be imported -- from Germany.

You've probably heard that GM is in the process of selling its German subsidiary, Opel AG, to French automaker PSA Peugeot Citroen. As part of that deal, GM will continue building some cars for Opel, and vice-versa. Regals bound for North American markets will be built alongside their Insignia siblings at Opel's factory in Ruesselsheim, Germany.

That's a change. The current Regal is built (for North America) at a GM plant in Ontario. It's not clear what will replace the Regal at the Ontario plant when production ends later this year.

The U.S. isn't the key market for the all-new Regal

Of course, the all-new 2018 Regal will also be built in China, where the Buick brand is very popular and Buicks sell in much greater numbers than they do in the United States.

How much greater? Last year, GM sold over 71,000 Regals in China, versus just under 20,000 in the U.S. The Regal's popularity in China may explain why GM chose to give the new Regals a longer wheelbase: In China, adults often sit in the back seat, making rear-seat comfort a priority for many customers. 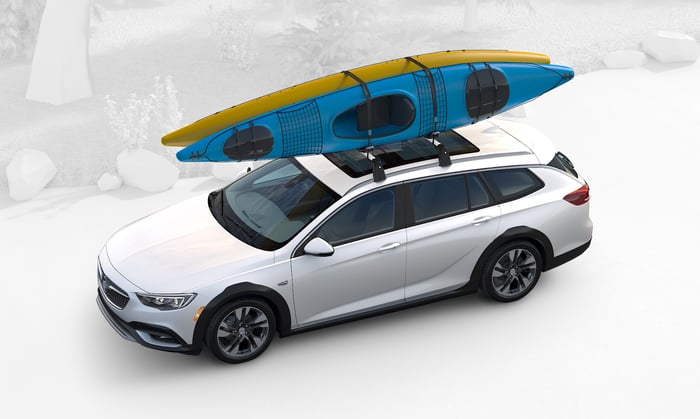 GM is hoping that the Regal TourX will tempt upscale, outdoorsy buyers away from Audi and Volvo. Image source: General Motors.

The all-new Regals will have their official Chinese unveiling at the Auto Shanghai show later this month.

Another new Buick will debut next week

April is a busy month for GM's upscale brand. Buick will show another new model at the New York International Auto Show next week: An all-new version of the big Enclave crossover SUV. Like the new Regals, the all-new Enclave is expected to go on sale in the U.S. later this year.