Facebook is planning to launch a digital wallet in India, but it's just a stepping stone.

India is already one of Facebook's (META -1.64%) largest markets. By some accounts, India already has more Facebook users than the United States. And if it doesn't yet, it will surely get there soon. India is certainly WhatsApp's largest market, sporting 200 million of the app's 1.2 billion monthly active users.

Now, Facebook's efforts have turned to getting those users more engaged with its products. After the Indian government shut down its Free Basics app, which provided free internet access to a limited set of apps (including Facebook), the social network is looking to become an integral part of Indians' day-to-day activities. Facebook is reportedly working on a digital wallet in WhatsApp, which could increase both adoption and engagement of the app. 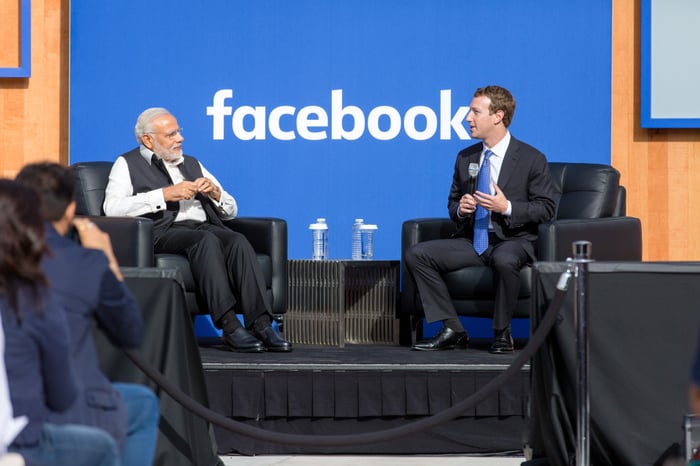 Getting in while the market is ripe

India recently took steps to counteract tax fraud and counterfeiting by removing old 500 rupee and 1,000 rupee notes from circulation in November. The notes were replaced by new 500 rupee and 2,000 rupee notes. The government also took a series of steps to incentive digital payments like discounts on petrol, insurance policies, and railway passes to help curb the problems. It's also incentivizing merchants to take digital payments.

Meanwhile, the National Payments Corporation of India launched the unified payments interface in August last year to make it easy for banks to quickly and easily transfer money between accounts. Apps using the UPI allow users to pay directly without needing to type in credit or debit card information or bank passwords. Additionally, the interface is regulated by the Reserve Bank of India, giving both merchants and customers a bit more peace of mind when using it. WhatsApp's digital wallet will likely tap into the UPI.

Not exactly a monetization strategy

It's unlikely Facebook is looking to take a cut of each payment processed through its digital wallet. That's noteworthy considering WhatsApp still doesn't produce any revenue for Facebook despite its 1.2 billion users and the $19 billion Facebook paid for it. But CEO Mark Zuckerberg insists the best way for Facebook to generate revenue is to increase the number of organic interactions between businesses and users on its platforms. That's exactly what a digital wallet will do.

Facebook may take a similar approach to Tencent's (TCEHY -2.18%) WeChat, which has an immensely popular digital wallet built in. Since launching WeChat Pay, Tencent has taken steps to further connect offline services (think doctor appointments and restaurant takeout) to online users. Tencent generates some revenue from payments, but not enough to break it out into its own operating segment. Payments falls under Tencent's other segment, which accounted for just 11% of the company's total revenue in fiscal 2016.

Instead of revenue, Facebook could see an increase in engagement. Over 60% of WeChat users open the app at least 10 times per day. Over 20% open it more than 50 times, according to Tencent Penguin Intelligence and China Academy of Information and Communications Technology. The most popular reason for opening the app: to access WeChat Pay.

While Facebook likely won't generate any revenue directly from a digital wallet, it's setting itself up for success in India. Not only will it naturally increase the amount of interactions between users and businesses, it will incentivize users to find a way to access Facebook's apps when they need it. That could lead to more users logging into its core Facebook app -- where it generates most of its revenue -- more often.