A bold move by a company entering the limelight has this investor excited.

Sometimes, a company comes out with a move that's so bold, so game-changing, and so forward-looking that it's hard not to pay attention. Such moves don't happen often. That's why my top stock to buy in April is Axon Enterprises (NASDAQ: AAXN) -- formerly known as TASER International (AXON -1.75%).

This Wednesday, the company announced the name change. But that was small news compared to what CEO and founder Rick Smith followed that up with: "We are going 'all-in' to empower police officers to more safely and effectively do their jobs and drive important social change by making body cameras available to every officer in America." 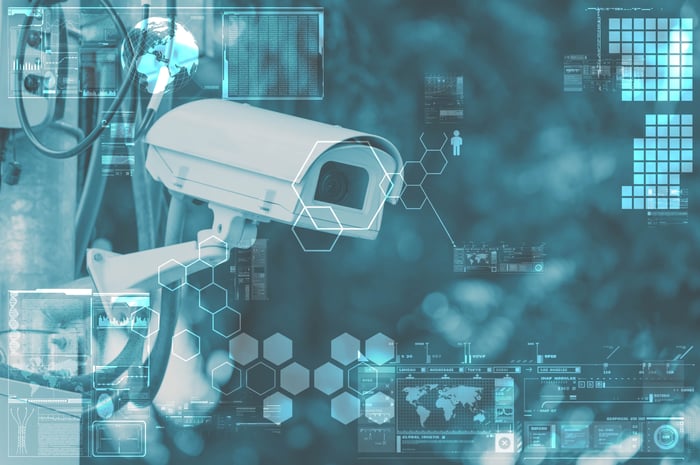 In other words, Axon will be giving away cameras and a one-year subscription to Evidence.com to every U.S. police officer that wants one. That's big news.

Not surprisingly, Wall Street did not react kindly to Axon's news. Leading up to the Wednesday announcement, shares were trading up as much as 6%. But immediately following the press release, the stock plunged 9% off its highs.

Pessimistic traders aren't delusional: There will be short-term pain involved in Axon's experiment.

As part of Axon's announced deal, any sworn police officer signing up will be entitled to, among other things:

Combined, these three products delivered $50 million of the company's $268 million in sales for 2016. And all three had seen their sales grow at impressive rates. Over the last two years, Body, Dock, and Evidence.com had seen sales grow at a rate of 95%, 109%, and 170% per year, respectively!

But growth in these three will come to a screeching half in 2017. While any sales of Body and Dock will likely evaporate, Evidence.com should still contribute to the top line. Growth, however, will need to be put on hold -- as every new subscriber will likely be on the one-year-free plan moving forward.

So what does that mean for investors?

If we assume that growth rates would have continued at just half of the rate they've been posting, the company is kissing roughly $55 million in sales goodbye for 2017. That's equivalent to about 17% of all revenue that analysts had expected the company to pull in.

Axon is safeguarded by the fact that it has a rock-solid balance sheet, with absolutely no long-term debt to speak of, and about $90 million in cash, short, and long-term investments on hand. It will also continue selling Tasers, which accounted for three-quarters of all sales last year, and grew by an impressive 25%.

Why this could be a brilliant move

Axon cameras were never the real story here. The market is being flooded with small cameras. There are no real moats behind selling such things. Evidence.com has always been the crux of the company's growth story.

Consider the high switching costs involved if a police department wants to migrate away from Evidence.com as the warehouse for all of its evidence. Millions of hours of evidence would hang in the balance, and thousands of dollars would have to be spent on both the migration and the retraining of the police force.

That's why this move is brilliant. Last year, New York City decided to go with another provider for body cameras, Vievu. Long-term, that was a major contract to lose. Would the outcome have been the same if the bidding process were this year?

There's no way for sure, but now, police departments nationwide have all the incentive in the world to sign on with Axon. They can tout that they saved their cities millions by getting free cameras, and Axon can bite the bullet, endure the short-term pain associated with such a deal, and rake in millions in monthly subscription fees associated with Evidence.com for years to come.

Traditionally, Axon's main competitive advantage was its relationship with police departments because of its long past of providing Taser stun guns. But that alone wasn't enough. Axon needed to offer more to get police departments hooked into its Evidence.com ecosystem. This is even more pressing as Axon is now the first-mover in artificial intelligence (AI) associated with body cameras, based on its recent acquisitions of Misfit and Dextro. That lead could diminish over time, but it won't matter if police departments are impressed by what Axon AI has to offer.

It is no different than the razor-and-blades model championed by Gillette years ago: Give the product away for free, customers will see how good it is, and they'll keep coming back for more -- year after year.

Only here, there's the added benefit that Axon has a wide moat provided by high switching costs.

Currently, the company makes up just 1.3% of my real-life holdings. But when Motley Fool trading rules allow, I will be adding more based on this game-changing news.

Why Matterport Stock Soared on Thursday