Please ensure Javascript is enabled for purposes of website accessibility
Log In Help Join The Motley Fool
Free Article Join Over 1 Million Premium Members And Get More In-Depth Stock Guidance and Research
By Ashraf Eassa - Apr 6, 2017 at 8:30AM

At the chipmaker's recent Technology and Manufacturing Day, one analyst asked an excellent question about chip innovation. The answer, though, was less than satisfactory in this Fool's eyes.

A brief review may be in order. Back in the second half of 2015, Intel introduced a processor architecture that it called Skylake, which brought a lot of new technologies to Intel's chips: redesigned processor and graphics cores, improved multimedia cores, new (to PC chips, anyway) technologies like integrated sensor hubs and image signal processors, a new display engine, and other goodies. 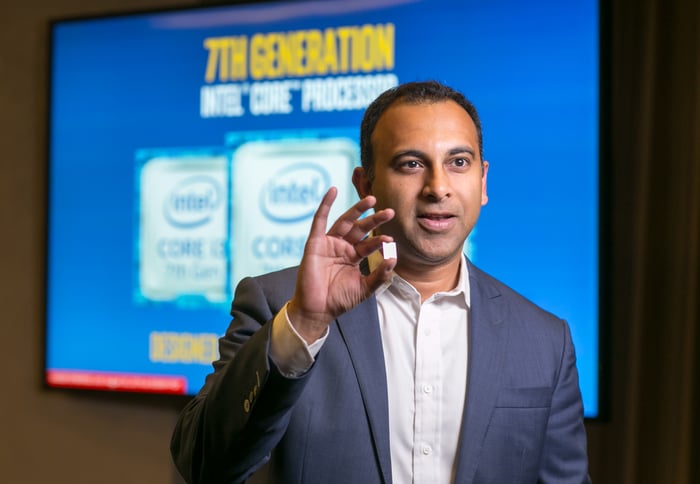 In late 2016, Intel rolled out a successor to Skylake known as Kaby Lake. which largely reused the same cores and technologies as its predecessor -- though it did come with an improved media engine. However, thanks to  an upgraded manufacturing technology, Kaby Lake chips were more efficient and more powerful than their Skylake counterparts.

Later this year and in the first half of 2018, Intel will reuse that same basic Skylake architecture in its eighth-generation Core processors (to be called Kaby Lake Refresh and Coffee Lake, depending on the product segment). Once again, Intel plans to bring enhanced manufacturing technology to bear, and this time around, it will boost the number of processor cores included in its chips.

The good news is that Intel should be able to deliver on its promise of newer, better products each year. The bad news is that, for a third product generation in a row, Intel isn't making fundamental improvements to its key processor and graphics technologies.

At Intel's Technology and Manufacturing (TMG) Day, one analyst asked the following question about this very topic:

Let's look at what Intel executive Murthy Renduchintala had to say.

Renduchintala began by arguing that in this discussion "we need to be really precise about the expansiveness of terms like architecture."

He then went on to clarify that "we can talk about new ways of interconnecting the various [intellectual property] blocks within a [system-on-a-chip] to get better performance, but let's also be clear that what we're also doing is upgrading key pieces of [intellectual property] such as CPU or GPU, looking at different configurations of clocks and memory bus access speeds."

This is where Renduchintala lost me.

The problem isn't that Intel isn't changing up how it hooks up its CPU cores, graphics cores, and other pieces of technologies; it's precisely that Intel hasn't really changed those intellectual properties over the course of several generations that's the problem.

Renduchintala then went on to say that "there isn't really a panacea where you basically move toward a complete new architecture that in and of itself is necessarily going to give you all of those gains."

I agree with him when he says that to get the kinds of product-level performance increases that the company aims to deliver on an annual basis, Intel's teams need to deliver on a "mixture of modification at the chip level construct, the improvement of [intellectual property], looking at the transistor process evolution, and creating a compound chemistry of that actually give[s] that performance improvement."

Where Renduchintala and I disagree is on whether Intel has really been fully exploiting the product-enhancement opportunities available to it.

Intel has done a good job of reshaping its chip development methodology to allow it to deliver new products at an annual cadence, even if it can't move to tinier manufacturing technologies every two years like it had hoped to do.

However, if Intel could deliver annual improvements in the underlying chip architectures themselves -- that is, if it could improve how each individual intellectual property block (like CPU and graphics) processes data -- I think that could help it deliver even larger generation-over-generation product improvements.

Or would Intel have stuck with those same intellectual properties even if it had known many years in advance that it would need to stay on derivatives of its 14-nanometer technology for a while?

Perhaps Intel will shed some light on these topics at some point in the future.