A rebranding is a sign of Melco Resorts' new independence from former partners.

In one fell swoop Melco Crown (MLCO -2.16%) is remaking itself and its biggest resort. The company announced late Tuesday that it's dropping "Crown" from its name -- this comes after Crown Entertainment divested from the company -- and will now be known as Melco Resorts & Entertainment. The ticker symbol will also be changed to "MLCO."

The move was probably inevitable after Crown divested, but this wasn't the only rebranding announced yesterday. City of Dreams is going to get a big facelift as well. The Hard Rock Hotel at City of Dreams will be rebranding this summer and from July 2017 to the end of March 2018 will be known as "The Countdown." There will be an actual countdown, which will coincide with the opening of the Morpheus tower at City of Dreams, the latest expansion to the sprawling complex. What happens to the hotel that now houses Hard Rock is unknown, but it'll be rebranded once again after the countdown is complete. 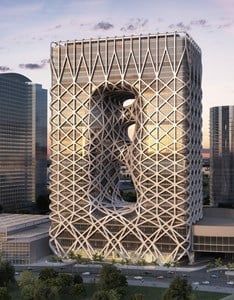 Rendering of the Morpheus tower at City of Dreams. Image source: Melco Resorts.

We could also see the Crown Towers name come down from the City of Dreams now that Crown Resorts has backed away from the venture. And with the name change of Melco Resorts, renaming The Hard Rock Hotel, and introducing the Morpheus brand there's a lot of change at City of Dreams.

There could also be a competitive reason to drop the Hard Rock name. Hard Rock has reportedly been interested in finding partners to help it bid on a Japanese gaming concession. This is the same concession Melco's management covets more than any other in the world right now. And partnering with a company that's become a rival isn't a great strategy in business.

Competition on Cotai picking up

The moves by Melco Resorts come at an important time for the Cotai region of Macau. Melco was one of the first operators on Cotai, along with Las Vegas Sands, but Wynn Resorts recently joined the region and MGM Resorts will finish a property later this year. As competitors enter, existing players have to spice up their offerings to stay relevant.

Melco is also adjusting to life without Crown Resorts as a guiding force. This may be an opportunity to brand City of Dreams as an independent brand rather than a mix of various global brands stuck in one complex. Long-term, that could be a good strategy for Melco Crown.

Rebranding both Melco Resorts and the Hard Rock Hotel tower are really more symbolic moves than anything else. The company is becoming more independent and wants to reflect that in its name and branding. And while a refresh of rooms or the look of the resort could help, it won't change where resorts are located or the overall size of the Macau market, which is far more important to earnings long-term.

What investors really need to watch is the potential loss of business to Las Vegas Sands, Wynn, and MGM's new resorts on Cotai. If the rebranding doesn't keep City of Dreams fresh customers will look for what they want to experience elsewhere. And now there are a lot of other options in town.