The rise of Netflix is leading to the messy, if inevitable, end of the movie-theater and film-distribution businesses as we know them.

A seismic shift is currently under way in Hollywood. According to a Wall Street Journal story, major studios and theater chains are coordinating a plan to release new movies on demand within 45 days of their big-screen theatrical premieres. This would be a big shift in the business model of feature-film distribution for both the major studios and the theater chains. Unsurprisingly, the catalyst for the shakeup is Netflix (NFLX -0.60%), which now boasts nearly 50 million domestic subscriptions, good for roughly 54% of the households in America, according to Variety. That's more homes than have a DVR!

The current system works this way: A major film is released in theaters. Then, 90 days after that, the film is usually available as a digital purchase for video-on-demand (VOD). A few weeks later, the physical DVD is available for sale. A month after that, the DVD becomes available to rent on services such as Redbox. Finally, seven to 10 months after its initial release, the film becomes available on cable channels such as Time Warner's HBO or Lions Gate's Starz.

This time window is compressed from just a few years ago. In 2005, the average gap between theatrical release and home-video availability was 135 days. Now it's 102. The longer wait gives theaters exclusivity over films, but as the window gets shorter, customers are more likely to wait for titles to come out on VOD or rental. Going to 45 days would be a big shift, but some studio chiefs believe the time frame should be even shorter, because consumers want to stream films at home more and more. 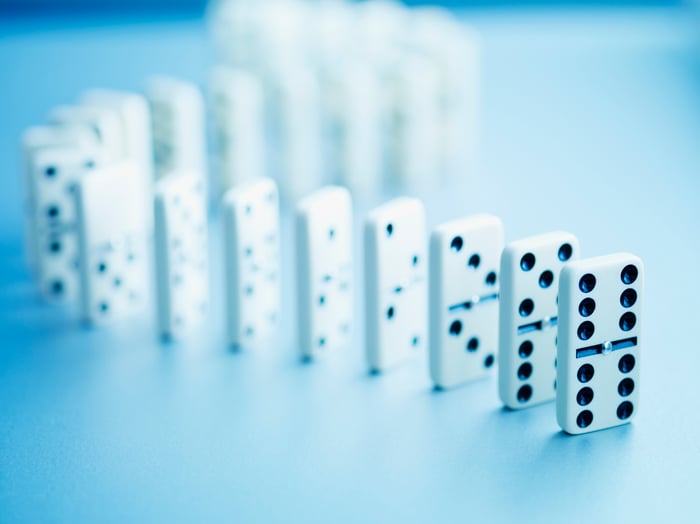 Viacom's (NASDAQ: VIA) (NASDAQ: VIAB) Paramount attempted to release some select titles on premium VOD closer to their release dates in 2015, but theater owners revolted, and the plan was scrapped. Films run on average for four weeks in the theater, and usually a bit longer on a smaller number of screens. The rumored 45-day proposal is coming right up against that window.

The move was likely hastened by Netflix's aggressive entry into producing its own big-name Hollywood films, in addition to its television originals. The company recently hired a major Hollywood executive to develop big films in-house. The company also recently bought the rights to an upcoming Martin Scorsese project. If Netflix develops enough content as streaming-only, more and more customers may stay at home, so studios are trying to get ahead of this possible shift.

Thus, most or all of the major studios are coordinating with theater companies such as AMC Entertainment (AMC -0.85%), Cinemark and Regal to build a new business model that can compete in this brave new world. In 2016, the U.S. box office was up 2%, but this was because average ticket increased 3%, so traffic was slightly down. Moreover, the number of screens has increased, so admission-per-screen was down 5.5% in the past quarter. More concerning is that theaters have increased prices greater than inflation for the past two years, which doesn't appear sustainable.

The broad outlines of the agreement are this: Studios will release their films for streaming on demand for somewhere between $30 and $50 per viewing. If the film is released early enough, say, within 30 days of a theatrical release, theater companies will get a cut of the VOD revenues -- likely somewhere between 10% and 20%. The details are still a bit fuzzy, and there are sure to be more sticking points, such as how long the theaters would be entitled to receive these commissions.

This is another evolutionary step, as technology has enabled ubiquitous access and tremendous viewing quality on home systems, PCs, and mobile. Moreover, distribution companies are buying up content companies, as with Comcast's purchase of Universal Studios, or AT&T's proposed purchase of Warner Bros. Studios. These mergers will further streamline the delivery of content to the consumer.

The upheaval could greatly affect the seven major studios, but I would be especially nervous if I were a shareholder in any of the theater chains. While I believe there will still be consumer demand to see big, franchise films in a glitzy theater with overpriced popcorn, the jury is still out as to how much traffic will be affected. A cut of VOD profits could help these chains cope, but it remains to be seen what profitability will really look like.

Could movie theaters be on the verge of declining due to online streaming, just as shopping malls seem to be due to the rise of online retail?I don't think the deterioration will be that severe. It's possible the commissions from early releases will fully compensate the theater chains, if they make good deals; there's a chance they could even make more money if traffic doesn't decline as much as feared. Still, I think investors in theater chains should take a wait-and-see approach until the details of the new model are clarified.