Please ensure Javascript is enabled for purposes of website accessibility
Log In Help Join The Motley Fool
Free Article Join Over 1 Million Premium Members And Get More In-Depth Stock Guidance and Research
By Keith Speights - Updated Apr 7, 2017 at 8:06AM

UnitedHealth Group, Humana, and Aetna stand out as three of the best Medicare stock picks.

As the baby boomer generation ages, one outcome seems certain: Medicare enrollment will continue to grow. That's concerning for the U.S. government, which must deal with higher Medicare costs. But for several companies, more people enrolled in Medicare is a very good thing -- especially if those individuals choose Medicare Advantage plans.

Three of the top Medicare companies are UnitedHealth Group (UNH -1.22%), Humana (HUM -0.98%), and Aetna (AET). Together, the three health insurers covered 46% of Medicare Advantage members in 2016. Here's why the stocks continue to look like good picks this year. 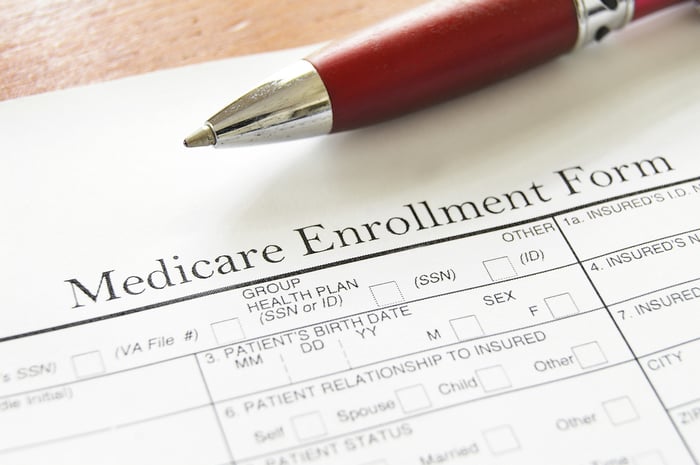 UnitedHealth didn't just focus on Medicare Advantage. The company reported 8.6 million people in its Medicare Part D prescription drug plans at the end of 2016. In addition, UnitedHealth covered 4.7 million seniors through its Medicare supplement plans offered in association with AARP. Roughly 25% of the insurer's total revenue in 2016 came from the Centers for Medicare and Medicaid Services (CMS), most of which came from Medicare-related products.

Over the past three years, UnitedHealth Group's stock has been the top performer among large health insurers. A big reason behind the stock's success is continued strong growth from the company's Optum business segment, which includes the OptumRx pharmacy benefits management (PBM) unit.

Higher Medicare enrollment combined with Optum's momentum should enable UnitedHealth Group to grow earnings by more than 15% annually over the next five years. The company's dividend yield currently stands at 1.52%. UnitedHealth's strong growth prospects plus a decent dividend make the stock a compelling buy for long-term investors.

Humana: Moving on after merger collapse

Thanks in part to a merger bid from Aetna, Humana's stock trailed only UnitedHealth Group in performance over the last three years. However, the deal was called off after a federal court blocked the merger on concerns that it would reduce competition.

Humana should be able to grow earnings by more than 13% over the next five years. Its reduced participation in the Obamacare exchanges should help boost the bottom line. Although Humana's dividend yield of less than 1% isn't as strong as some of its peers, the company seems well positioned to increase the dividend down the road.

The insurer's membership includes another 3 million individuals enrolled in its Medicare Part D prescription drug plans plus 685,000 people buying its Medicare supplement plans. Over 43% of Aetna's total revenue in 2016 stemmed from government programs, with Medicare generated a substantial portion of that revenue.

Aetna's stock performance over the past three years has lagged behind that of UnitedHealth Group and Humana. However, the stock has nevertheless racked up significant gains. The termination of the planned merger with Humana doesn't appear to have hurt Aetna's share price much. However, Aetna did agree to pay Humana $1 billion in cash as part of the two companies' termination agreement.

Over the next five years, Aetna should be able to grow its earnings by close to 14% annually on average. Like its peers, the company is reducing its participation in Obamacare exchanges dramatically, a move that should improve profitability. Aetna should also continue to experience strong growth with its Medicare Advantage plans. This growth, combined with Aetna's dividend yield of 1.57%, should make the stock a winner for investors over the long run.