The week ends with a one-two dose of good news for Wal-Mart.

Up less than 5% in 12 months, shares of retail giant Wal-Mart Stores (WMT -0.28%) have lagged the rest of the S&P 500 by more than 10 percentage points over the past year. But could happy days be here again?

Two analysts think so. This morning, first tiny Telsey Advisory Group announced it is upgrading shares of Wal-Mart to outperform and raising its price target more than 12% to $82 a share. Shortly after, Jefferies & Co. chimed in with an endorsement of its own, reiterating its buy rating on Wal-Mart stock and doubling down on an $86 price target. 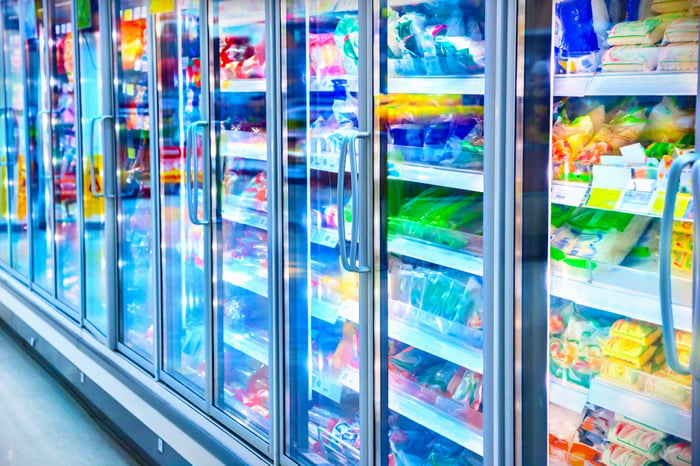 Physical retail is a mess. Left and right, we see retail companies filing for bankruptcy (RadioShack, hhgreggg, Payless, and maybe soon Sears as well), or seeking to sell out to avoid it, as Staples is said to be doing. Amazon.com's low prices and ever-quicker delivery options are simply wreaking havoc among the brick-and-mortar crowd. But perversely, that could be good news for companies that manage to survive to pick up the pieces (and the market share) of their fallen rivals.

According to Telsey Advisory Group, as the biggest physical retailer in the world, Wal-Mart Stores is one such likely survivor. StreetInsider.com notes that Telsey believes Wal-Mart is "regaining dominance in the physical retail game" both at its eponymous retail stores and at Sam's Club warehouse stores as well.

This, says the analyst, should help Wal-Mart to grow its profits slightly this year (from $4.38 to $4.40 per share), and lead to even stronger profits growth in fiscal 2018, when Telsey sees Wal-Mart growing earnings 6.6% to $4.69 per share.

At the same time, Jefferies argues that investors should not overlook Wal-Mart's substantial online operations. It notes that Wal-Mart's CEO claims the company enjoys "a multiplier effect" from selling goods online to folks who can pick up their purchases immediately at physical stores, while those same stores give otherwise online shoppers a chance to try on and try out goods, and buy them in person.

Jefferies also believes that Wal-Mart's purchase of Jet.com will improve its online business with "Smart Cart proprietary technology that adjusts prices in real time based on proximity of product to the shopper and shipping costs." Both observations tend to support Telsey's finding that Wal-Mart is enjoying "stronger sales ... in the digital market."

3. The proof is in the pudding

But can any support for all this be found in Wal-Mart's financials? Perhaps -- and perhaps not.

According to data from S&P Global Market Intelligence, even as its rivals are flailing, Wal-Mart's U.S. retail stores have enjoyed a combined 16.5% worth of revenue growth over the past five years, while Sam's Club sales are up 6.7%. Profits, however, are lower at both of these two big Wal-Mart businesses over the same period, with the company earning less money from its retail stores -- and its wholesale stores as well -- last year than it did in 2012.

This may be the cost of doing business in the U.S. (or even remaining in business) for Wal-Mart. Everywhere you look, one competitor (Amazon.com) continues to gain market share even as it becomes more and more profitable, while others (Staples, for example) struggle and look for a buyout, and still others (Payless most recently, and soon, perhaps, Sears) simply throw in the towel go out of business.

Yes, Wal-Mart survives -- but is simply surviving a good enough reason to own Wal-Mart stock? I'm not so sure it is.

Valued on P/E, Wal-Mart stock currently costs 16.6 times trailing earnings. Even were it earning today what Telsey says it might earn two years from now, the stock's P/E ratio would still be 15.5, which seems a mite expensive for a company growing profits not at all today, maybe a modicum next year, and only 6.6% the year after that.

When you get right down to it, even if Telsey is right about Wal-Mart being a survivor, and even if Jefferies is right, too, the stock still doesn't look cheap enough to buy.