The office supply company is more than just a retailer, and private equity firms have taken notice.

To many, office supply company Staples (SPLS) may look like a struggling retailer selling products, like paper and ink, that fewer people need in the age of computers and mobile devices. The retail portion of Staples certainly fits that description, and the company has been closing stores in an effort to wring out as much profit as possible. But that's not the whole story.

If Staples were only a retailer, a recent report from The Wall Street Journal confirming that private equity firms are interested in buying the company would be surprising. But the report isn't surprising at all, because Staples is increasingly becoming not a retailer. More than 60% of Staples revenue in 2016 came from outside of its massive store base, generated by its commercial delivery and online businesses. The company aims to eventually bring that number up to 80%. 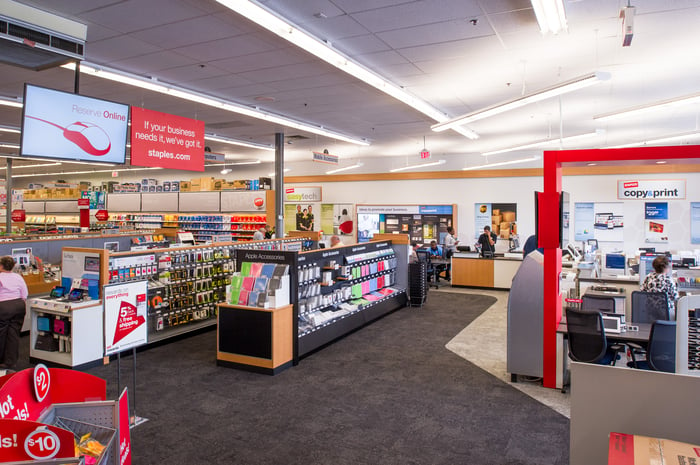 The other part of Staples

Selling products, 50% of which are outside of traditional office supply categories, to businesses large and small has proven to be a resilient business for Staples. The company's North American delivery segment, which includes direct sales to businesses as well as all of Staples' online sales, generated $10.64 billion of revenue in 2016 and produced an operating margin of 6.3%. Comparable sales rose 1% and segment operating margin jumped 52 basis points compared to 2015.

The retail business generated just $6.67 billion revenue in 2016, with comparable sales slumping 5%. The stores are still profitable, with an operating margin of 4.8%, but that's down 52 basis points compared to 2015. There's no reason to believe that these trends will change anytime soon, and Staples plans to close another 70 stores this year on top of the 350 stores it has already closed in the past five years.

Staples truly is two companies in one. The first, a retailer that would be unlikely to survive in the long run on its own. The second, a supplier to businesses that has successfully diversified into new product categories and enjoys at least some protection from the rise of e-commerce. Amazon and online retail, in general, is likely an insurmountable threat to Staples' retail business. It's also a threat to the commercial delivery business, but based on that segment's results, not one that can't be beat.

Regardless of whether Staples remains a public company or is taken private, the strategy will likely remain the same. More stores will be closed as the company manages the retail business for profitability, and Staples will look to broaden its commercial customer base by going after mid-market customers. The smaller the customer, the more competition from the likes of Amazon, so this strategy isn't guaranteed to succeed.

Staples expects to produce at least $500 million of free cash flow this year, putting a potential $7 billion price tag for a buyout of the company at 14 times that number. Staples' balance sheet is more solid than those of many retailers that have spent the past few years loading up on debt to buy back shares. The company had $1.1 billion of cash and $1.05 billion of debt at the end of 2016.

Another attempt at a merger with Office Depot could be in the cards down the road if Staples is taken private. The Federal Trade Commission shut down the most recent attempt last year, arguing that large organizations would be hurt by consolidation. The FTC under the Trump administration may be more willing to approve a deal, especially if Amazon continues to make inroads into the commercial business.

The retail side of Staples is the only part that most people see, but it's the rest of the business that makes the company worth considering as an investment. With the stock surging due to the buyout talk, there may not be much upside left. But if a deal doesn't happen and the stock slumps as a result, Staples could enter value territory once again.

These 3 Dividend Stocks Could Slash Their Payouts
405%